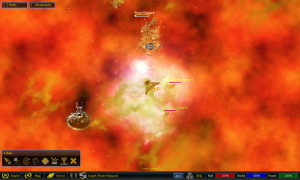 Let’s start with the general news. The Space Game Junkie website is doing what looks like quite a complete let’s play of Unending Galaxy in five parts. I haven’t watched it yet, but you can find it on YouTube. Of course, here’s the usual reminder that Unending Galaxy is on Steam Greenlight, don’t forget to vote, that will help immensely. Last, but not least, the first mod for Unending Galaxy has been released by Paul, it’s a whole new faction called Starborn Dominion. It is available on our forum here.

As usual, you can get the basic edition in the download section. You can buy the full Deluxe Edition at the itch.io store. If you already bought the game, the deluxe edition should be available at your store or through the download key you got by email.

Let's get to the changes now :) 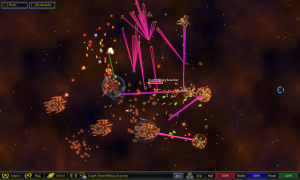 It’s probably the main “new” thing in this release. As you are well aware, the game’s handling of sound effects is poor to say the least. Well, no more ! I switched to a library based on OpenAL. It is infinitely better, faster to load, easier to put into the game and way more powerful. Also, contrary to the previous one, it does work with my debugging tools, meaning that I will catch sound related issues much faster.

It’s not yet integrated to its full potential as I need to get my bearings with this library, but you will already see a major difference as you’ll be able to hear shots being fired by other ships in the sector. Sound is now directional (handling stereo, 5.1 and 7.1) too, the volume and the direction will change according to where the sound is coming from.

The sound effects themselves are the same for now, and some (laser beams) are still missing, but there’s now an incentive to find and include better ones. I am also fixing the volume of individual effects as this improvement made very apparent that the current ones are on very different levels. It also opens the game for ambient sounds like asteroids getting mined, or industrial noises near factories, granted I can find the effects. 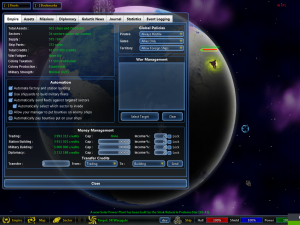 This one will likely make a lot of people happy. It is possible in this 1.05 release to set new global policies for your faction. So far I added 3 of them, but more will likely come soon.

First, to address the justified complaint that pirate wings have a tendency to slip by your armies unmolested, you can now set your stance against the pirates. You can either tell your security forces to ignore them unless they are directly attacking one of your assets (like it was before), or you can order them to consider any pirate ship an enemy to be destroyed. This is extremely efficient at dealing with them granted you have enough security ships, of course.

Secondly, you now have a bit more control over your warpgates. Here you can keep everything as usual (open to all but hostiles), open them to your allies only, or close them to anyone but you. Note that gates don’t scan the ships themselves to grant or deny access. It’s based on the faction controlling the gate on the other side. In other words, if you’re at war with the pirates, but at peace with, let’s say the humans, it’s still possible (in theory) for a pirate ship to use a human gate to access your territory. Likewise, if you closed your access to all other factions, you won’t be able to jump from a foreign gate to your own territory. Also, understand that the operation takes a bit of time (pilots who already have set their course through one of your gates won’t recalculate their paths).

Finally, you can forbid your territory from getting accessed by other factions completely, like the Neo SPQR does in the early game. Trespassers will be attacked by your security forces. Note that this option is likely to damage your reputation with other factions over time, some ships will inevitably cross your borders at some point and get shot down in the process.

While right now you’re the only faction with the ability to change those policies, it’s likely that the other AI factions will ‘learn’ to do that too in a couple releases

Possible fix for the elusive and rare crash 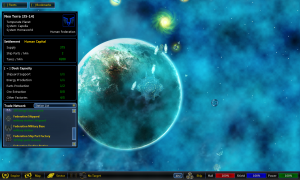 While the game works fairly well for most users, a few reported rare but quite random crashes and failures. Despite being less and less common, it is still an annoying issue and fixing this problem has been one of my priorities for a quite while now. Between the random nature of the crashes and the fact that I simply can’t reproduce it in the debugger at all despite letting the game run for days, it’s a very hard one to catch. It’s also time consuming as hell, there’s no other way to test than letting the game run for hours and hours, severely limiting my ability to do other things.

Now that you are warned, I found what seems to be a very likely culprit and fixed it. If it was the one and only cause, then it may be fully fixed. I did run 2 uninterrupted 15h+ and 20h+ games, and the amount of weird behaviors and “silent” errors (you don’t see them as a player, they are either handled or ignored by the game, most are perfectly normal, others not so much) dramatically reduced compared to the usual. So, in any case, that’s a good news for the game’s performances and stability in general. 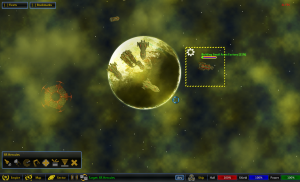 I added a progress indicator, as a percentage, when a dock is being constructed by one of your builders. You’ll have to select the ship and it’ll be next to its name. I’ll make something fancier when I get the time to do so. Made most of the “ship orders” descriptions a bit more useful too while at it.

I also rebalanced a few prices, ships and weapons. There’s more work to be done on the weapon and shield balancing front, but that’s a start.

I improved performances by roughly 15% on quad core (and above) CPU. I can push that quite a bit further, at least on relatively beefy machines, but that will need quite a bit of additional coding so it adapts automatically to the amount of cores the CPU has. I am not going to touch that in this release but it’s likely to be included in the next one.

Not of a big interest to 99% of the players, but very important to me. I updated the debug log system (option in game’s controls to log some of the game events and most of the errors into a file) so it can be more useful to me. I am likely to enable it by default too. 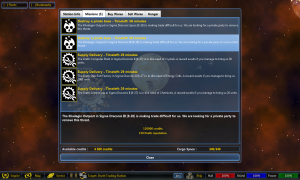 I also fixed a bunch of minor to major issues.

For some reason 2 fixes I made in beta 5 got removed from the 1.0 release, I am not sure why and I blame the lack of sleep during the pre-1.0 rush: You will actually have to destroy your target during “kill something” missions instead of waiting for it to be destroyed by someone else and get free money (i know, life’s hard). The second bug is that opening the ship setup menu would reset the AI settings under some circumstances, fixed too (again).

I also fixed a bug with area of effect weaponry that could lead factions to put bounties on themselves and ships to attack their home-base. It likely fixed a bunch of other minor weird behaviors I wasn’t aware of in the process.

Ships escorting a hostile leader (a pirate boss for instance) are now correctly identified as hostile too. Basically escort ships will mirror their leader relationship with you (or anyone else for that matter).

Swarm Gargants and spores will drop loot as expected. Bonus ships in the deluxe edition now have the correct assigned faction. I also fixed a bunch of spelling mistakes.

There’s a few small improvements and ease of use requests I promised to implement quickly but they couldn't make it to 1.0.5. It’s not that I forgot or lost interest, but the sooner this version is released the better. I need my recent fixes to be tested on a large scale.

I think that’s all for now, enjoy !