Mirrors, mimics, and major progress updates! Summer's come to a close, so come see what we've been doing.

The good news? The end is in sight. The bad news (again?). The end is still pretty far off. Effectively, we know every remaining task that has to be done now, but that task list is still pretty gargantuan. Could we release the game now in its current state and have a pretty swell space game? For sure. Are we going to go the extra ten miles instead? You know it bro.

And finally, another sad tidbit, but our next demo (demo 1.9) will have to be delayed. The game’s gotten large enough now that uploading has become a problem and Unity (which can’t support resource files bigger than 4gb when packed, for some reason) is introducing texture errors into current builds. Fixing this will take a few days, though it doesn’t stop other bits of
progress.

Phew! That’s a lot to take in, so let’s move on to everything that was done this month, eh? As always, this is a paraphrasing of the main article, which you can read here. Be sure to check out our demo and join our Discord for more moment-to-moment updates!

I’ve been writing up many of the game’s sidequests, and we’re close to about 50% done for their first draft. There’s still more to go, and many of course simply aren’t implemented, but have a preview of what you can expect. 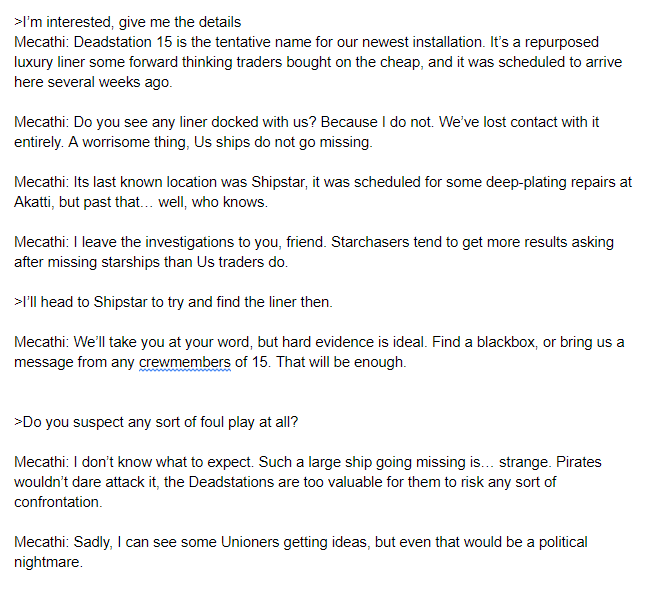 Quests require bits of tech and can always be improved of course. I noticed a lot of them revolved arounding activating objects in your inventory, so I added a quickslot to let you quickly activate objects that are able to be activated.

I also redid events a bit, and added assassins that get sent after you, should you manage to make the wrong kinds of people mad.

I also added proximity script triggers. Which are overengineered to heck and back. But these objects, when you go near them, can charge up, play effects, and when finished, execute scripts. There’s situations where these are really fun (for example a quest where you use them to download data into a computer-virus-shooting-gun to take some computers offline).

Storms are beginning to get in a final state. Hazards for them are still a WIP, but each region now has its own unique storm type, with lots of pretty weathery colors. 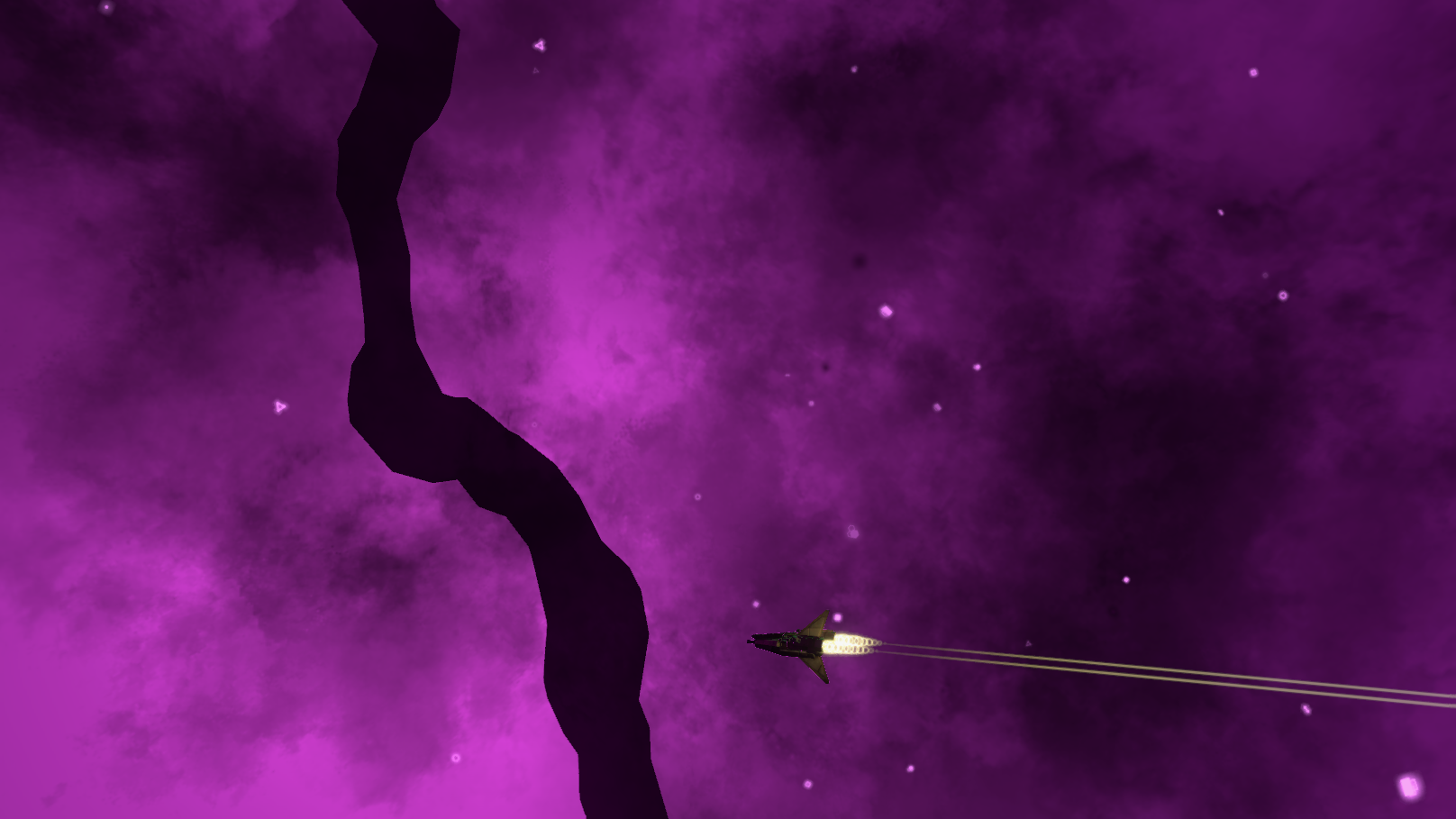 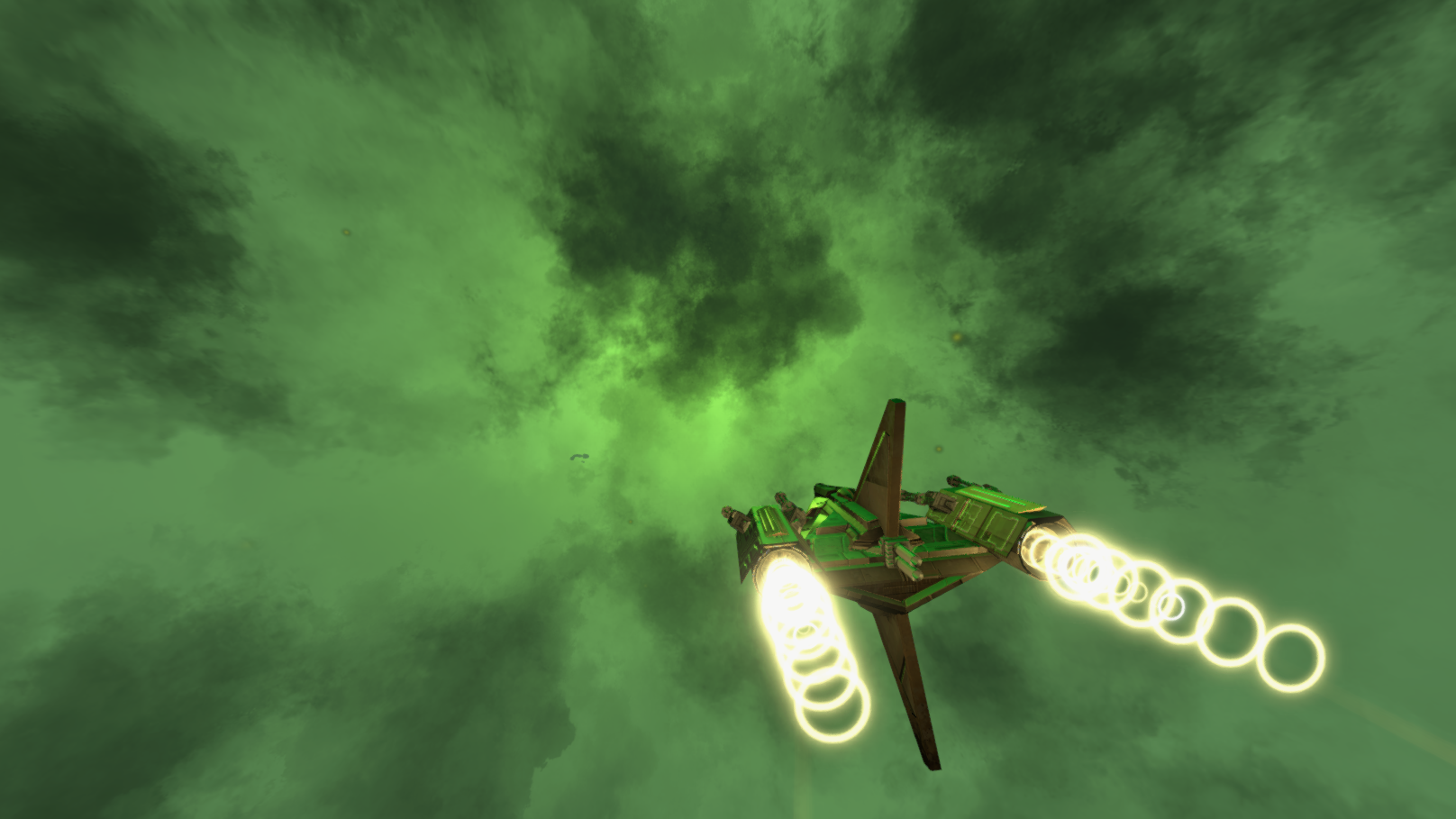 I’ve also created some more exterior effects for storms. Any nebula that has a storm going on will flash and spark from the outside. Good for realizing where you should be going at a glance!

Hazards! And Other Dangers

You’ll recall that the galaxy is littered with enormous derelicts and starship corpses. It’s been my vision since this game was in its infancy that these derelicts are filled with all manner of traps and hazards. This month, I started off by giving all of them names and backstories. 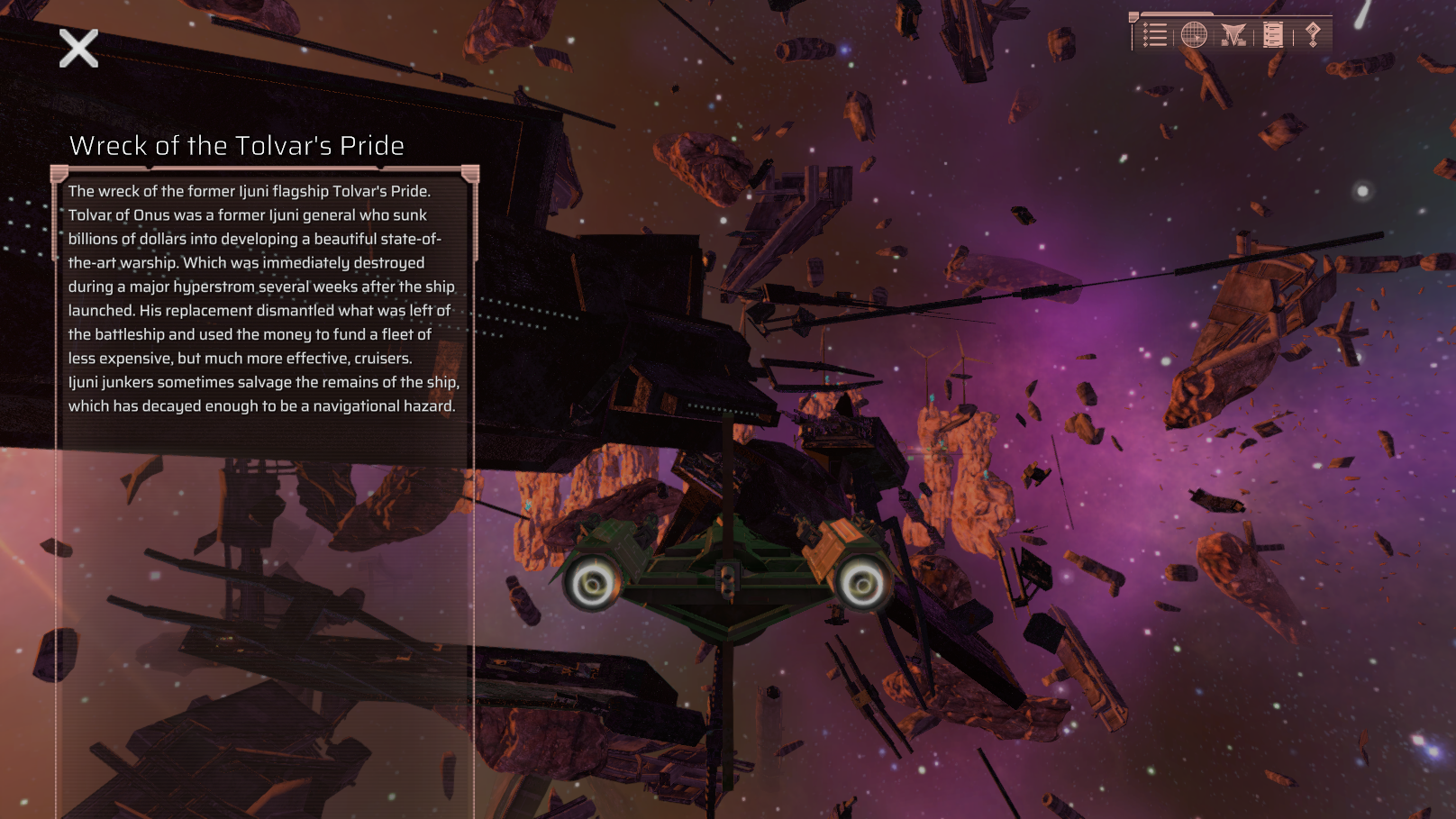 I also recoded their many mimics to be able to attack in packs, and if one wakes up, be careful! They can wake up their nearby friends as well. 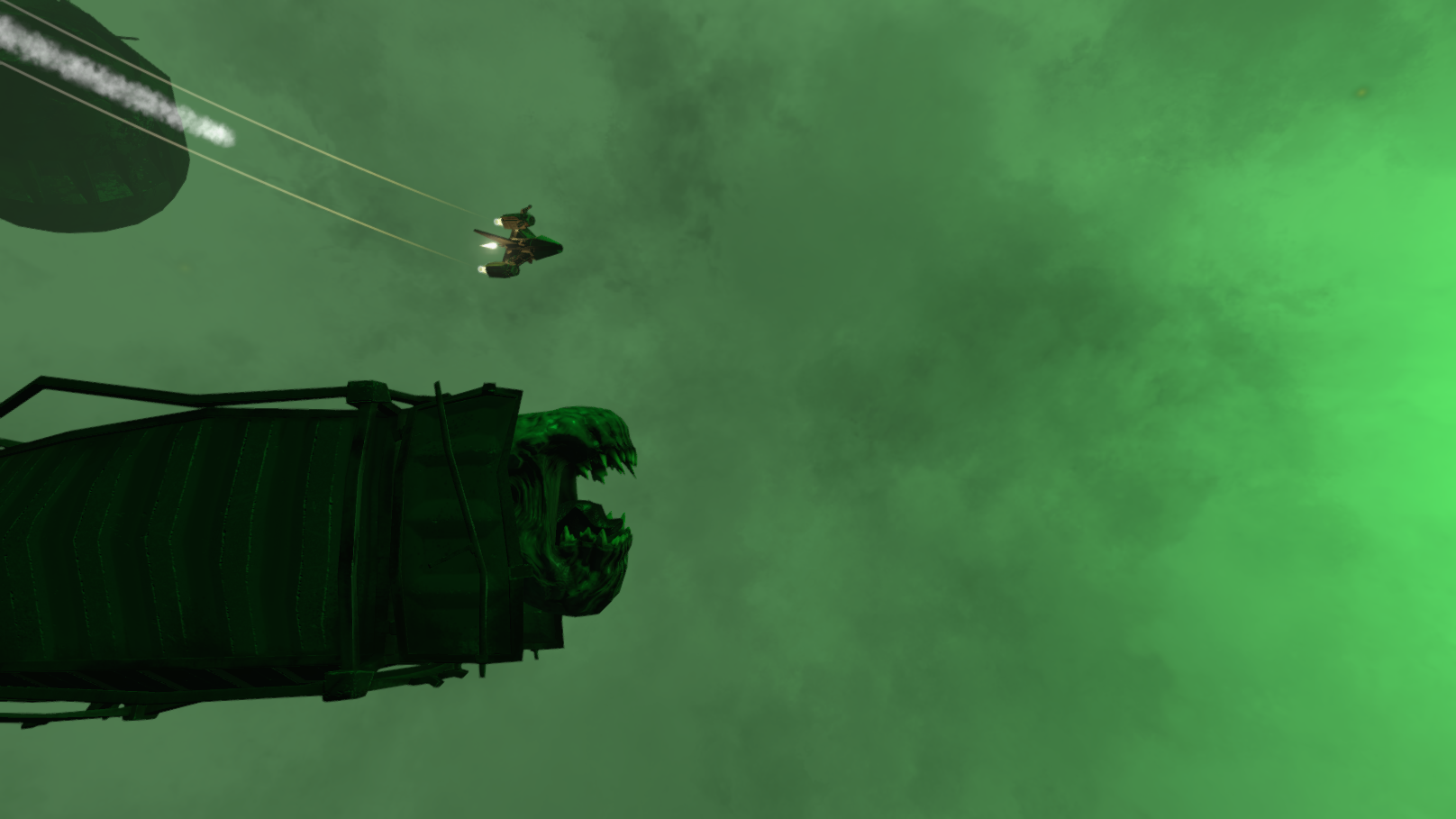 And everyone knows some errant laser and power conduits might create hazardous beams that the player will very much want to avoid. I’ve refactored these to work much better and be more accurate.

And what dead cruiser would be complete without lovely pockets of deadly radiation? Hope your ship is lead-lined (it isn’t).

All these hazards and more can be detected with scanner upgrades, which now point out various traps and secrets, with stronger ones even able to detect hateful intent in cargo containers. 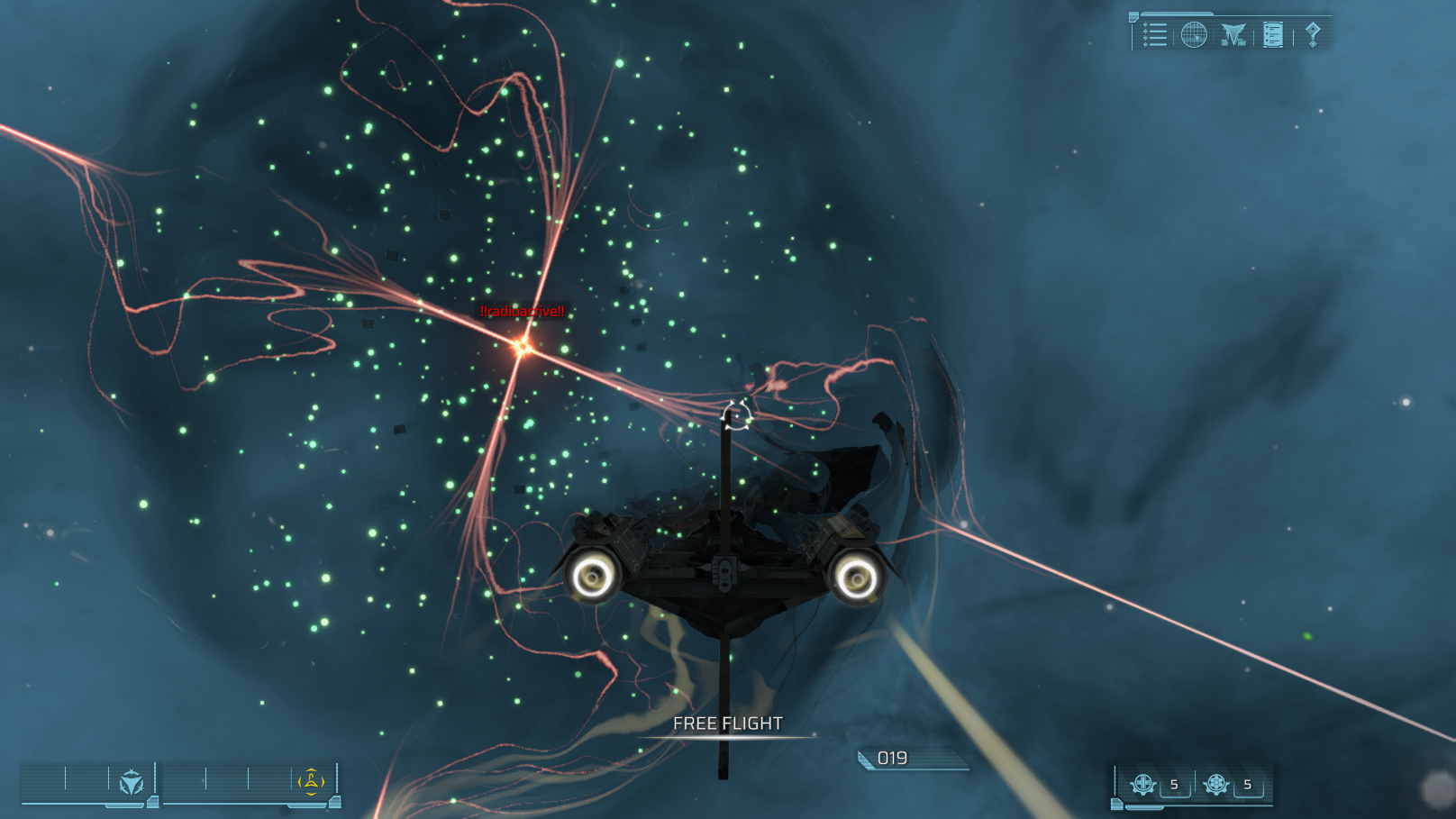 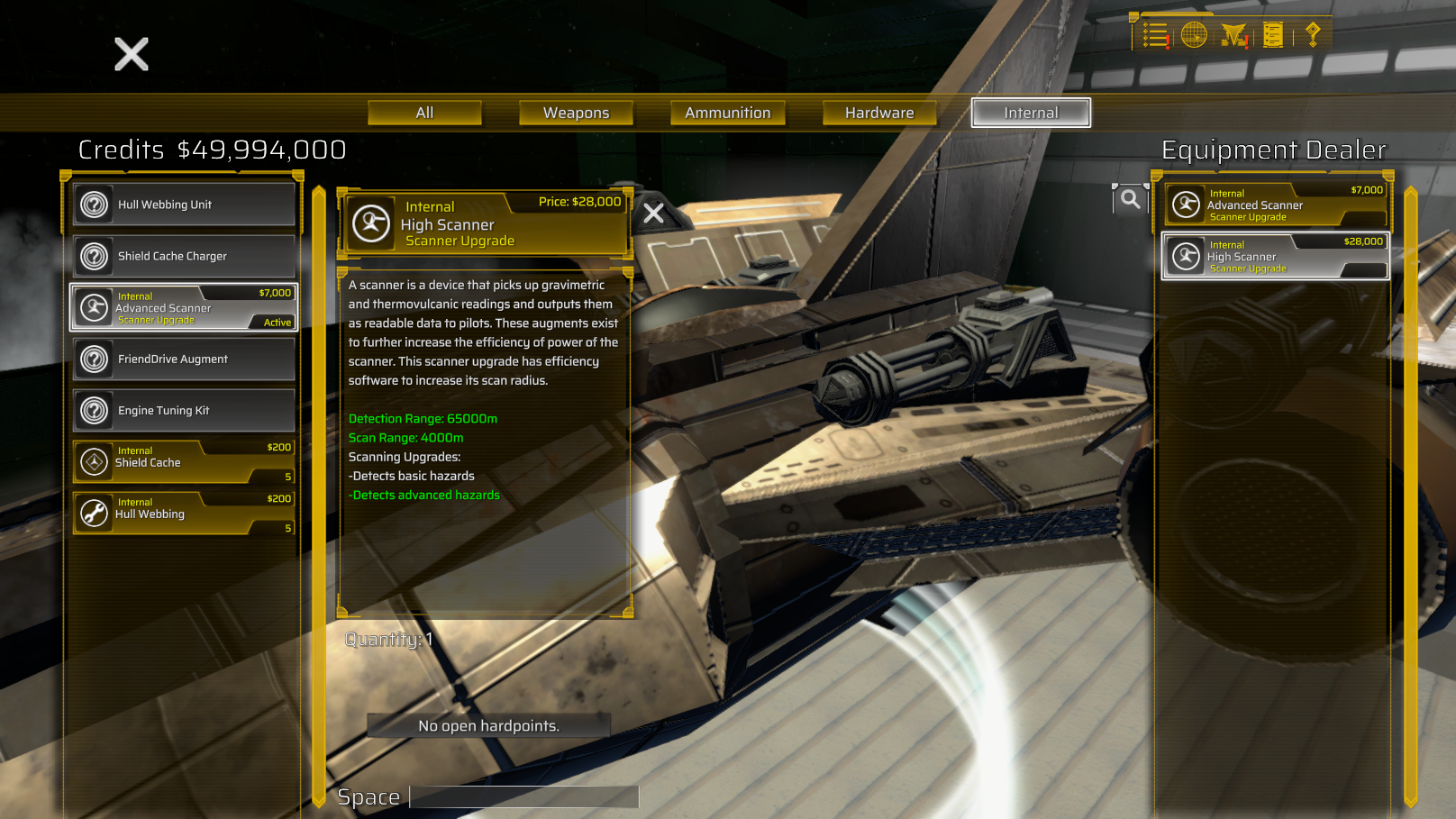 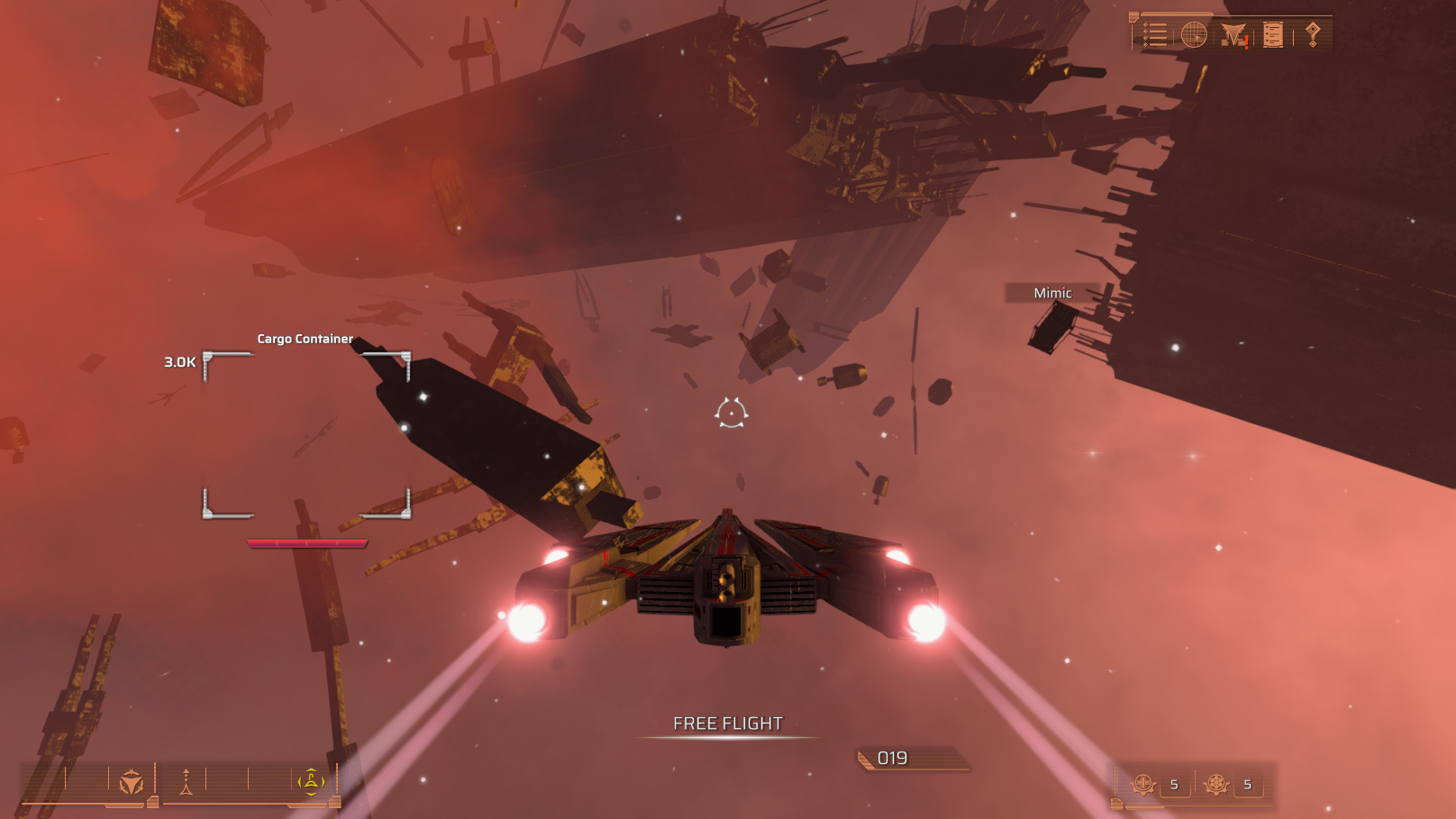 Placement of these hazards is still ongoing, but they’re very versatile and can be used in a lot of situations. Particularly those proximity explosives. Modders should have a lot of fun with them.

Last month I promised a space mountain. And I keep my promises. Mostly. 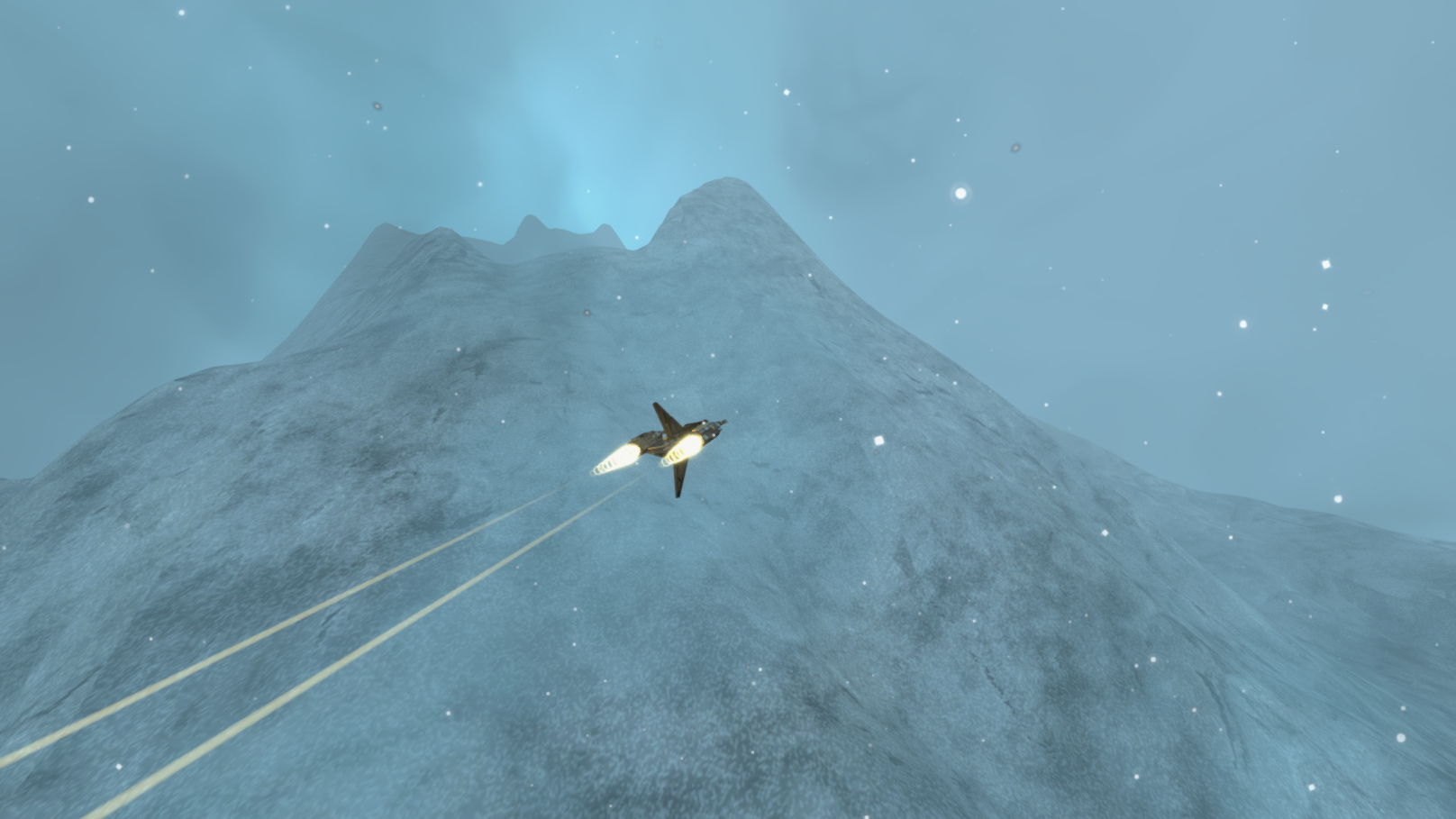 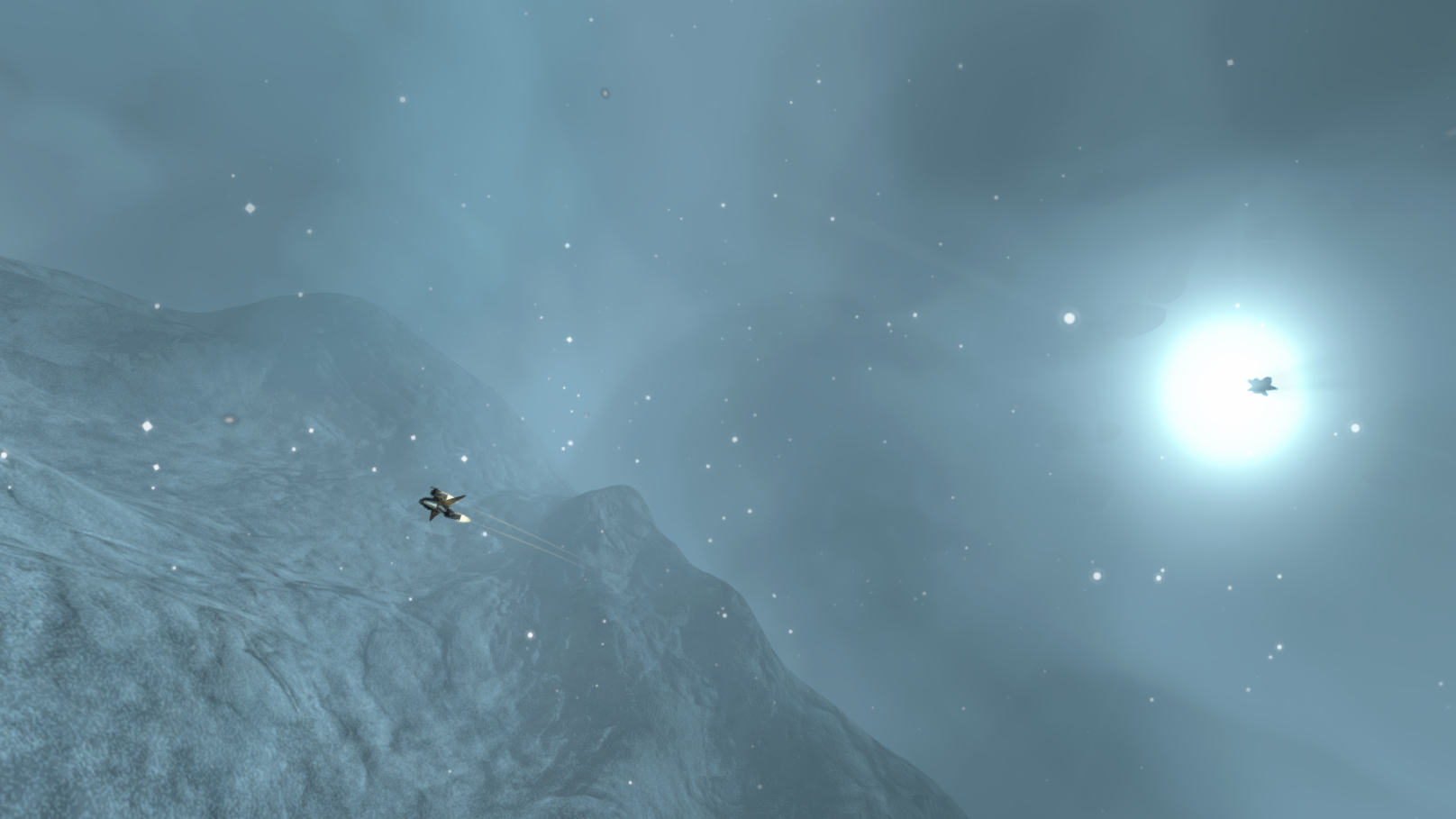 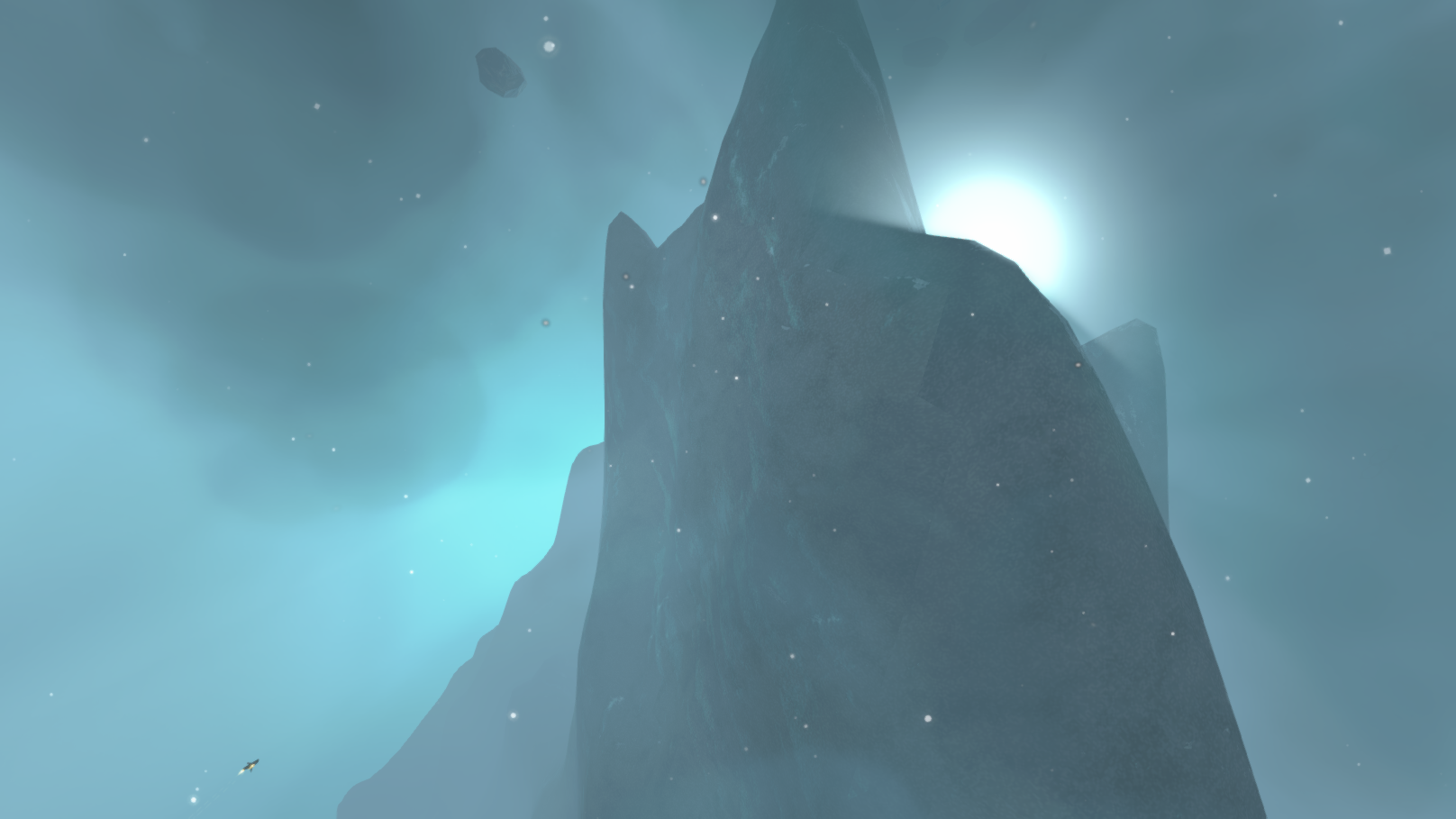 I’ve also added a space mirror. It’s said to show your true desires, but model trains are still overpriced when I look at it, so that’s probably just a myth.

I had to code up some custom shader tech to get the parallax effects working on it, so if you’re a Unity developer, you’re free to try it out!

We also modeled out a few bosses. Ever wanted to get trapped in a televised ancient alien arena gameshow and have to be forced to fight your way out? Wow, me too! 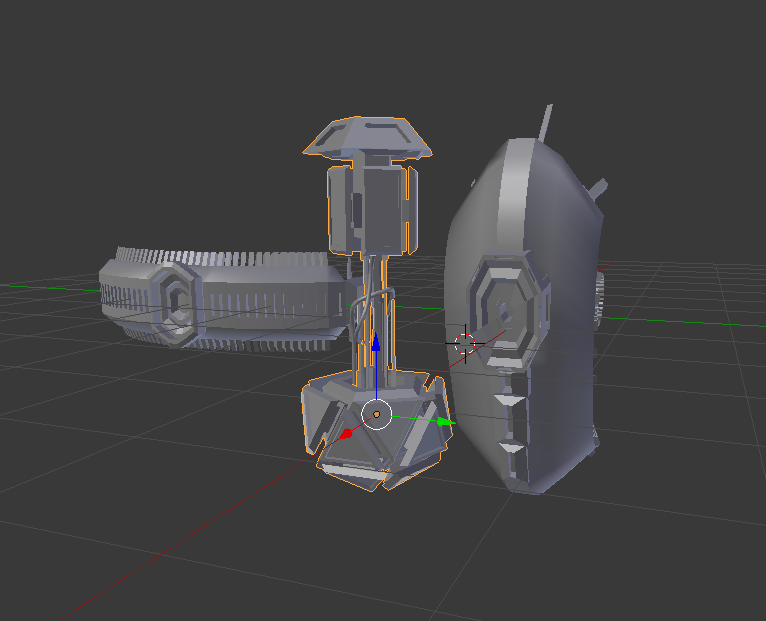 And finally this thing. What is it? Well you’ll find out, eventually. 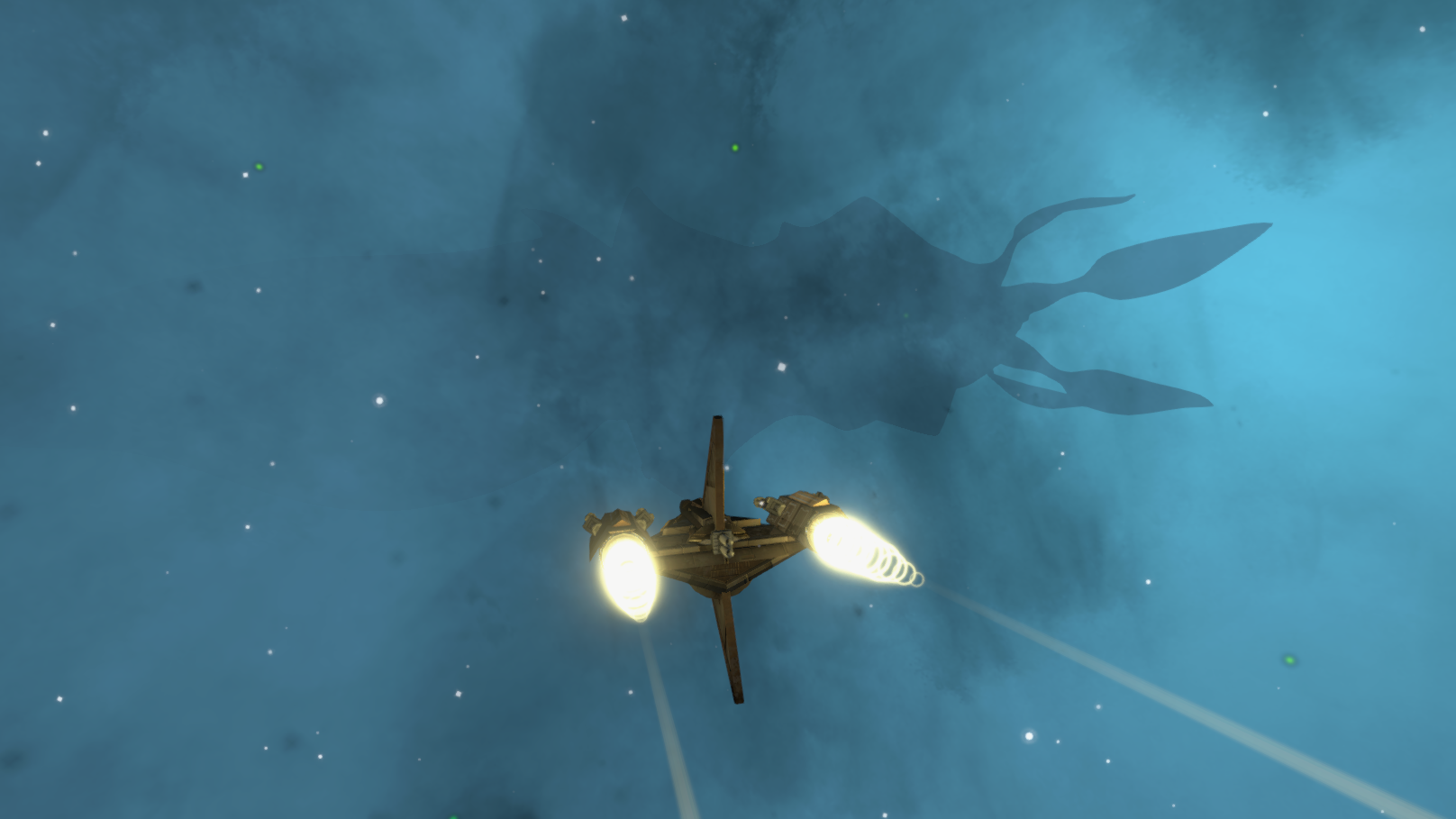 And that’s all for this month! I’m hoping next month to get you some concrete stuff involving the main campaign, along with sidequests, of course.