Happy summer Starchasers! I know someone’s gonna be like “NO trainwiz it’s not summer yet summer is specifically three days in June when the cicada armada forms into the shape of Jimmy Carter’s left nipple bluh bluh” or something but I don’t care. It’s summer, the sun is warm against my pasty dying skin, and that means I feel energized and ready for TONS of progress.
In other news, our next release is Demo 1.9, which will have more of a piractical focus. As in piracy. For pirates. But that’s a bit of a ways out. 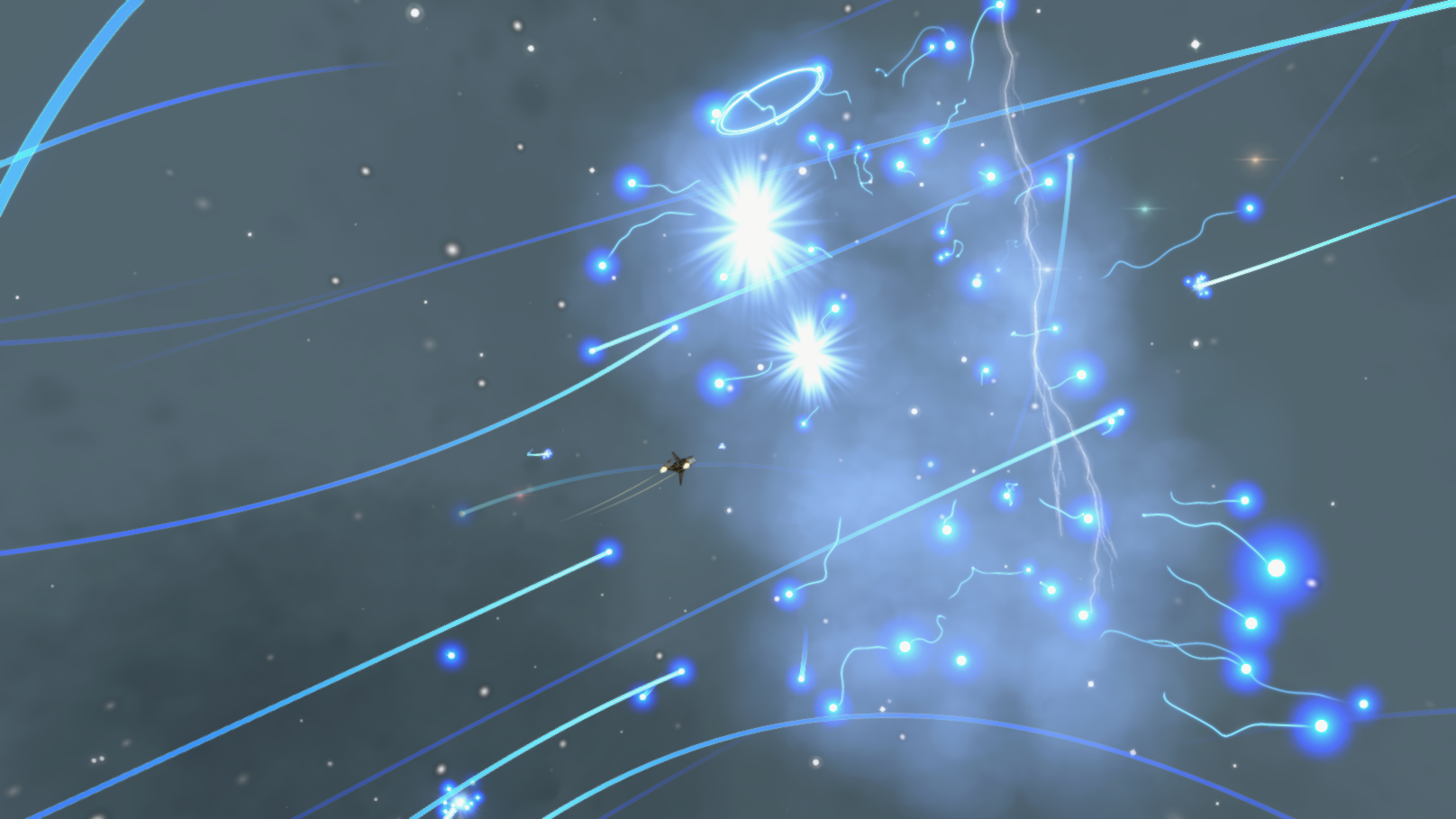 For now, onto progress! Be sure to check out our demo and official Discord. As always this just a paraphrasing of the main article, which you read here.

In the five main regions of the galaxy you can find five main regional bosses. While they vary in strength, each one tests an aspect of gameplay and your skills in it. You can find the first regional boss, Sparkplatform, in the demo already. This past month we made the other four, for a total of 7 current hidden ambient bosses in the game (out of 18).

In the Ijunic regions, you can face down a dangerous stormcloud monster with a crown made of lasers. Which frankly is just pretty dang cool. 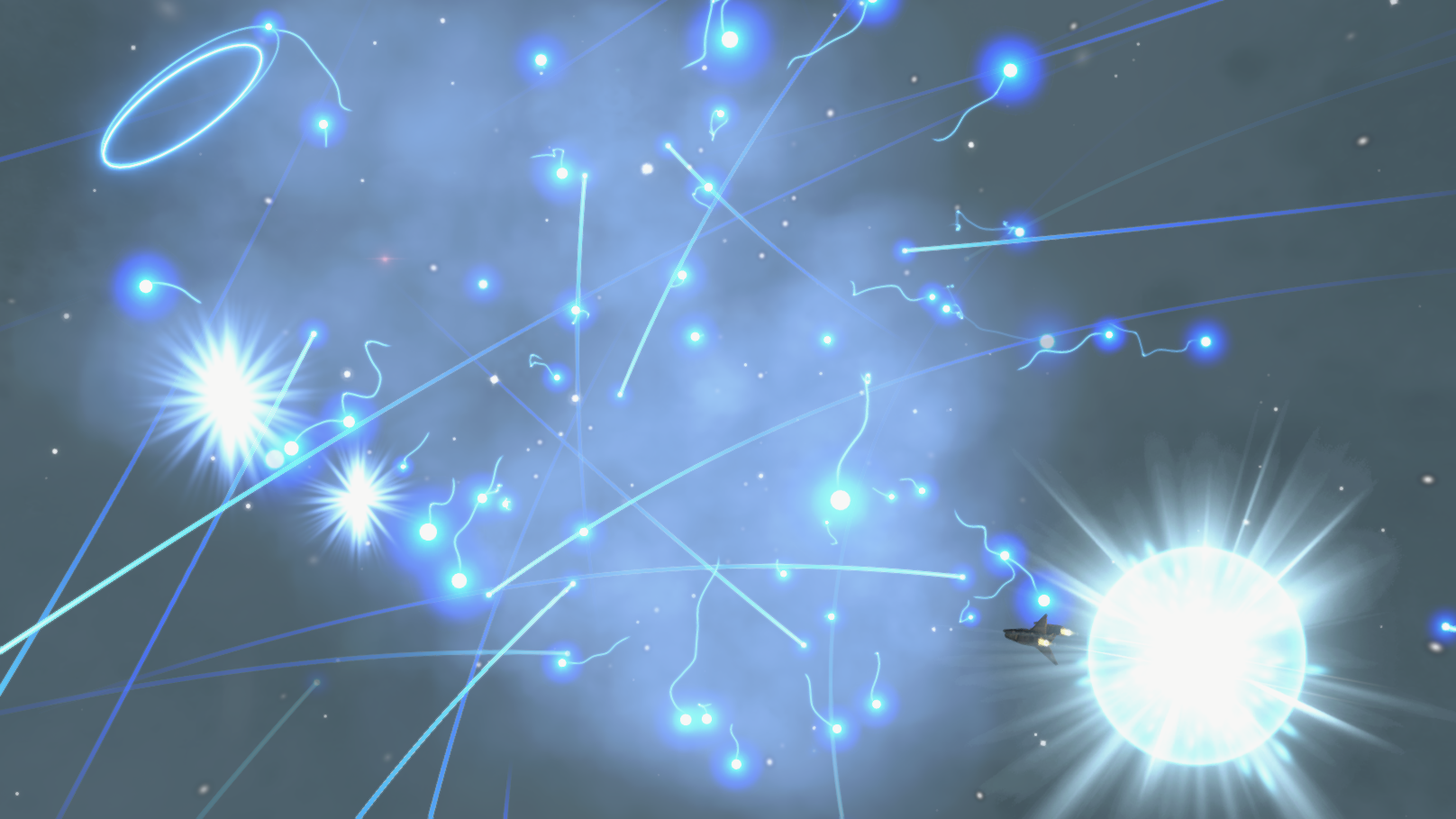 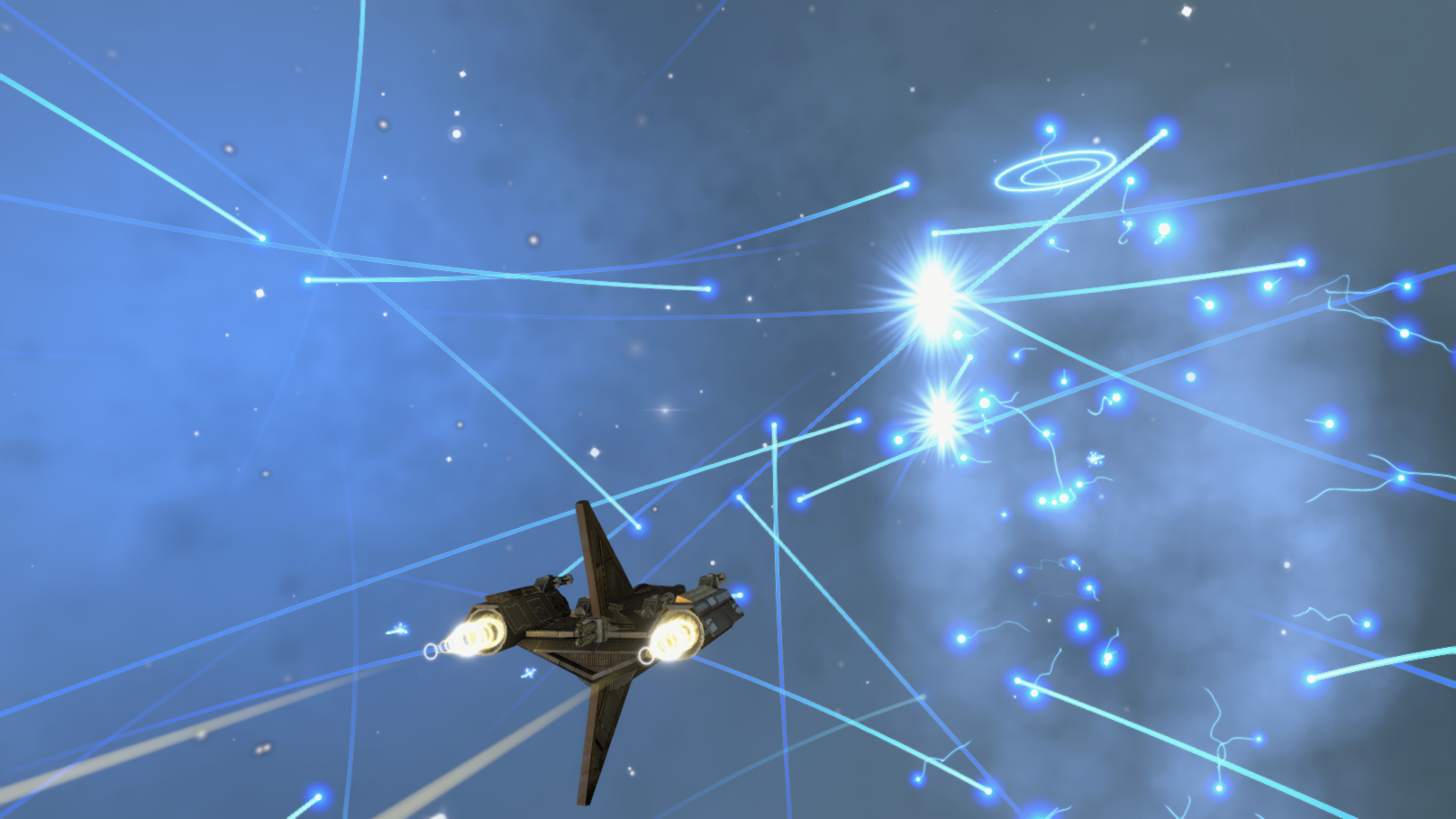 The Macrovari tell tales of a mad naval captain, who welds his victims’ ships to his own to help it from breaking into pieces as he runs it out of control. 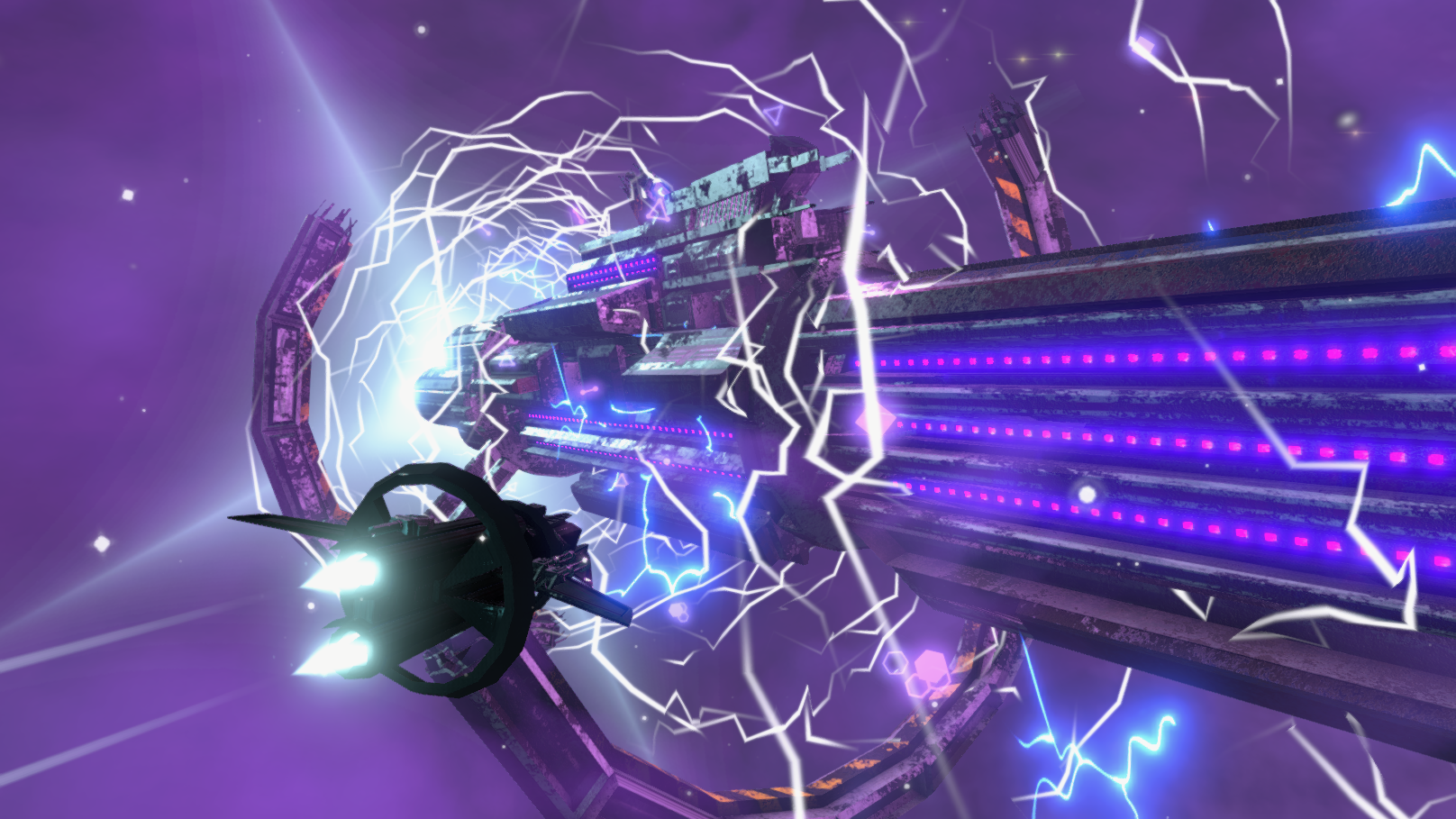 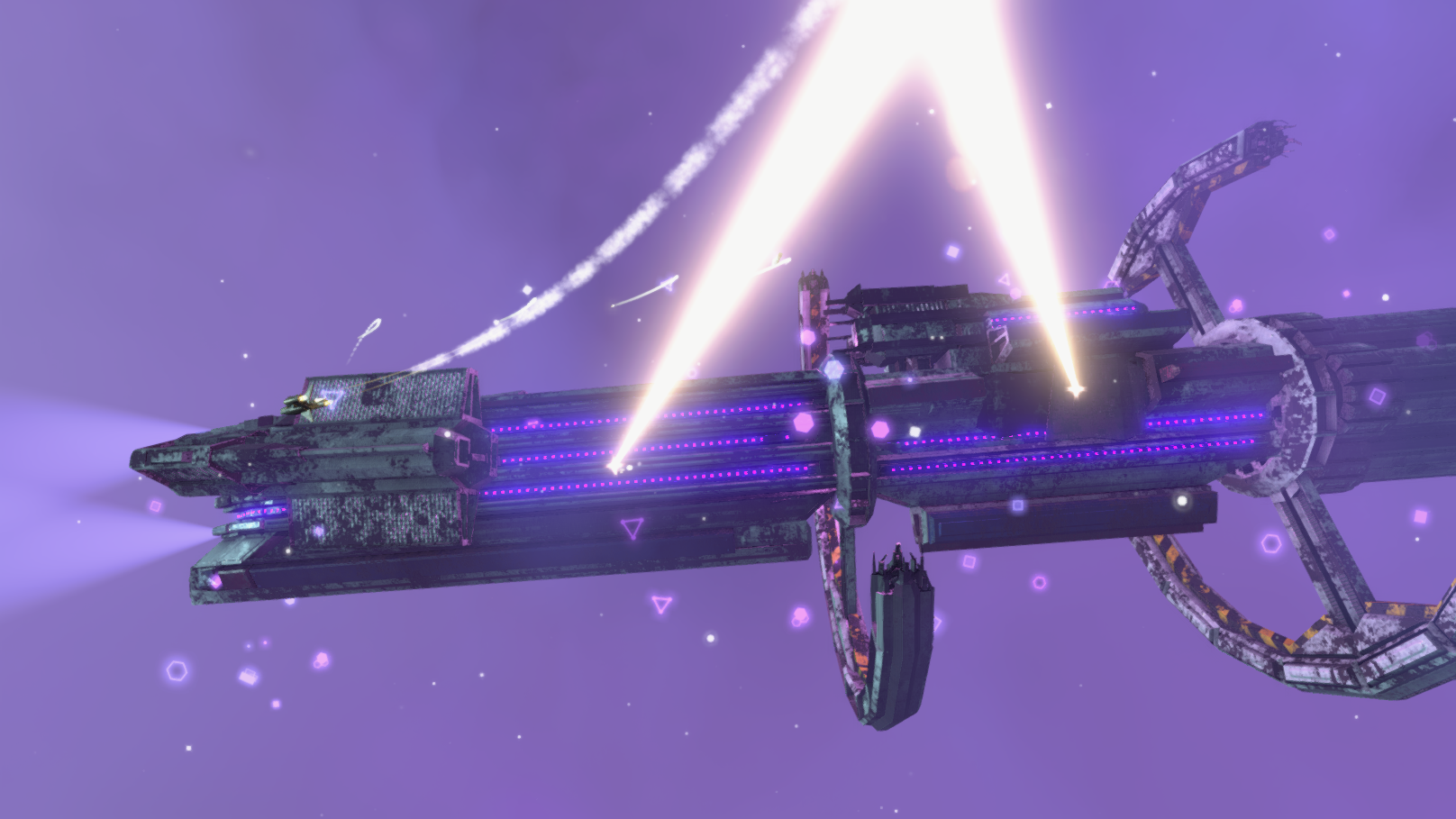 Deep within the Union capital, there’s legends of the ManyShip, a powerful stormwight that tests worthy starchasers by shifting forms and abilities at a whim. 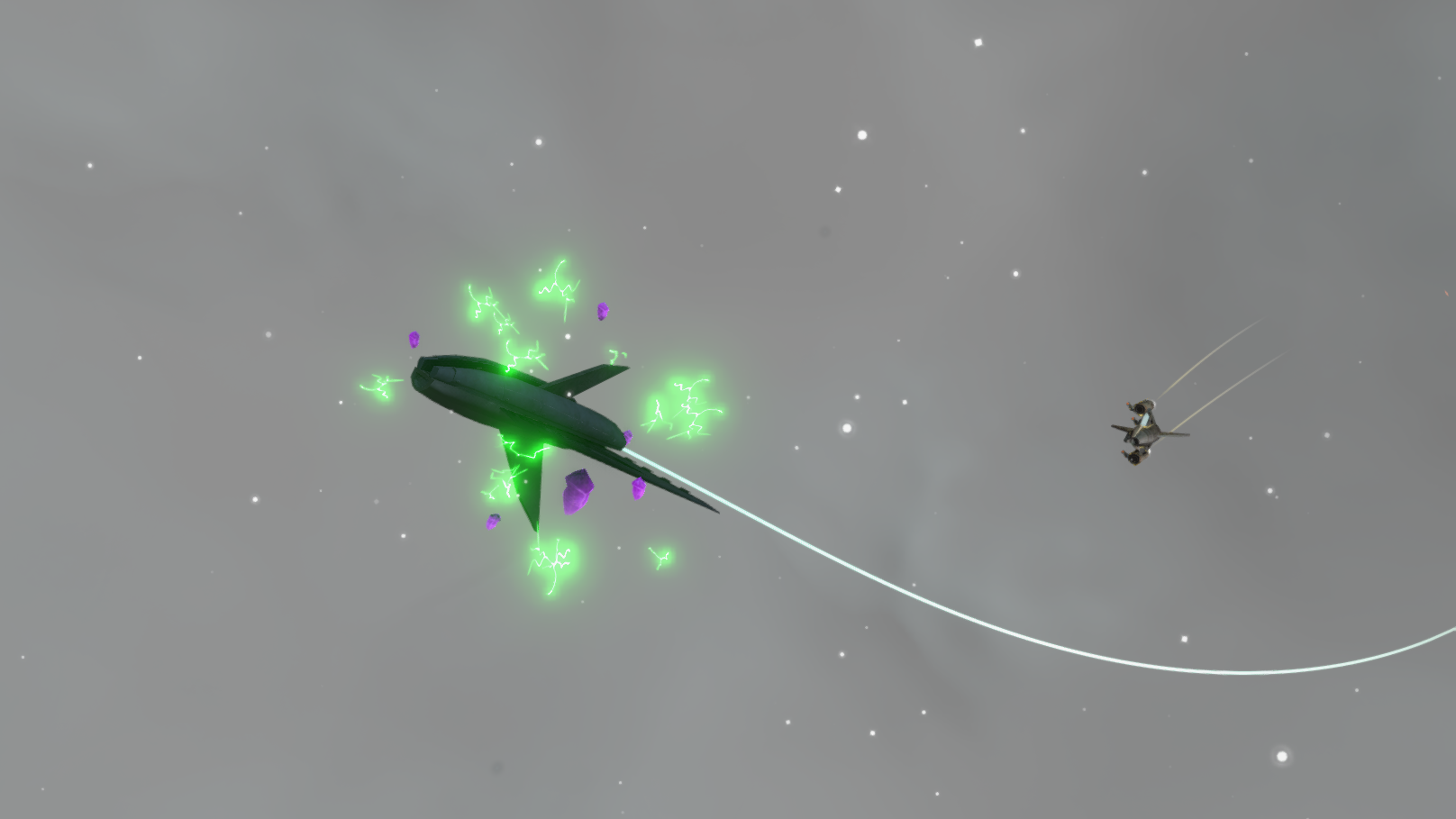 And finally the Ballden are doing their hardest to suppress news of Cahgurine, a former brilliant sculptor now turned insane hivemind, wielding far too many lightning field generators. 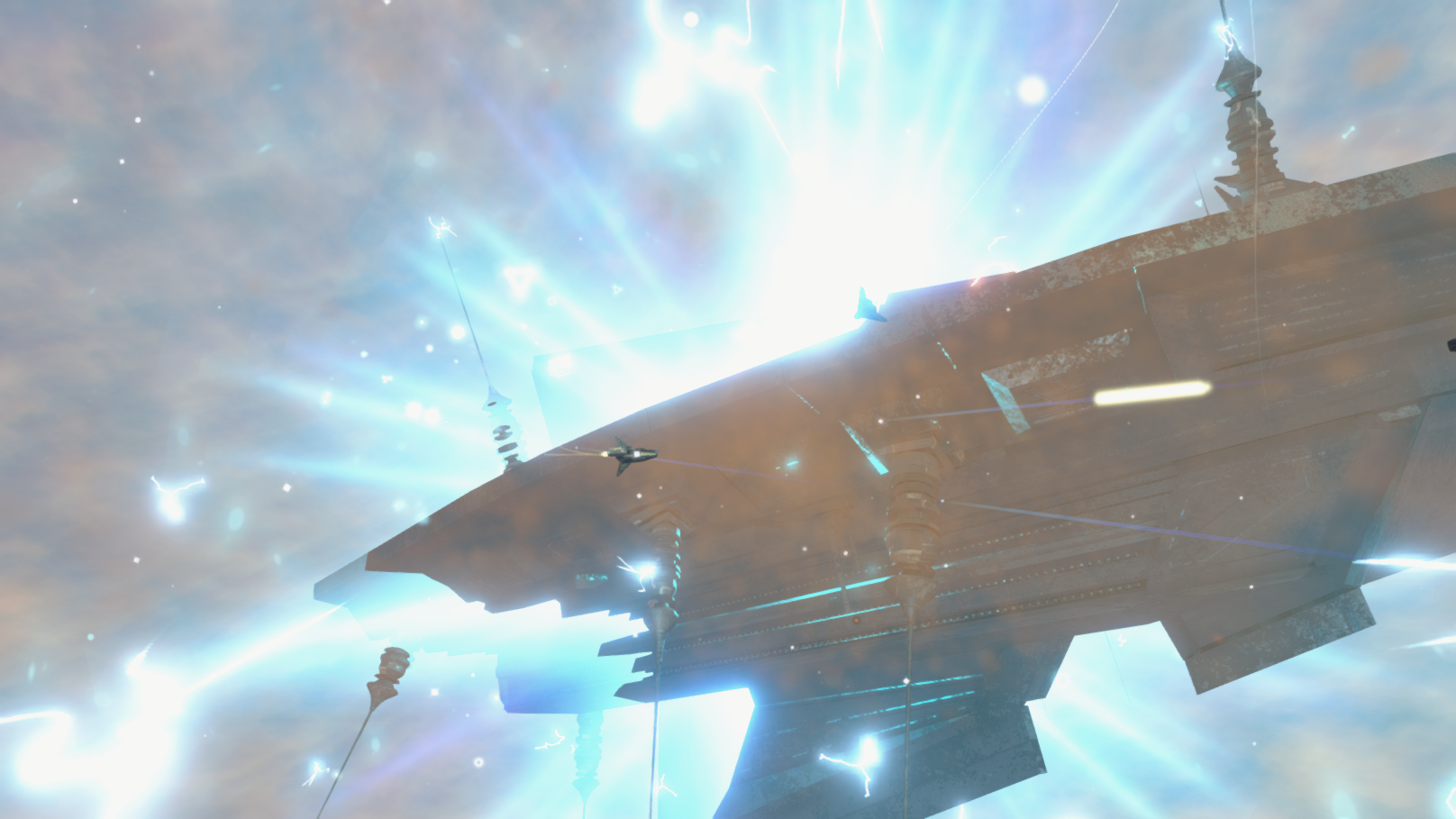 There’s a lot of underlying systems that were added to make these boys work, but the good news is that such work only has to be done once, and like most trailblazing bosswork only gets faster and faster from here on out.

We’ve also done more with quests, mostly focusing on non-demo quests, which can start to get fairly in-depth, with many colorful characters and often unique mechanics and endings.

A few of these new quests are still being worked on, but a few are in the finished stages. If you ever wanted to participate in a murderhobo death tournament, have we got news for you!

The campaign isn’t safe from our questing fingers either, demo feedback often asked for a way to track where to go for the next campaign mission, so we’ve added simple quests to help track that.

And, for even more help, if you try to leave the initial starting area without going through the tutorial, it will warn you of that. You can still leave, it’s just that if you smack into a planet, it’s no longer our fault.

Storms also had more done to them this month. First, unstable jumpholes, which shoot the player to completely random systems, were placed all throughout the galaxy and had special graphics created and tweaked. 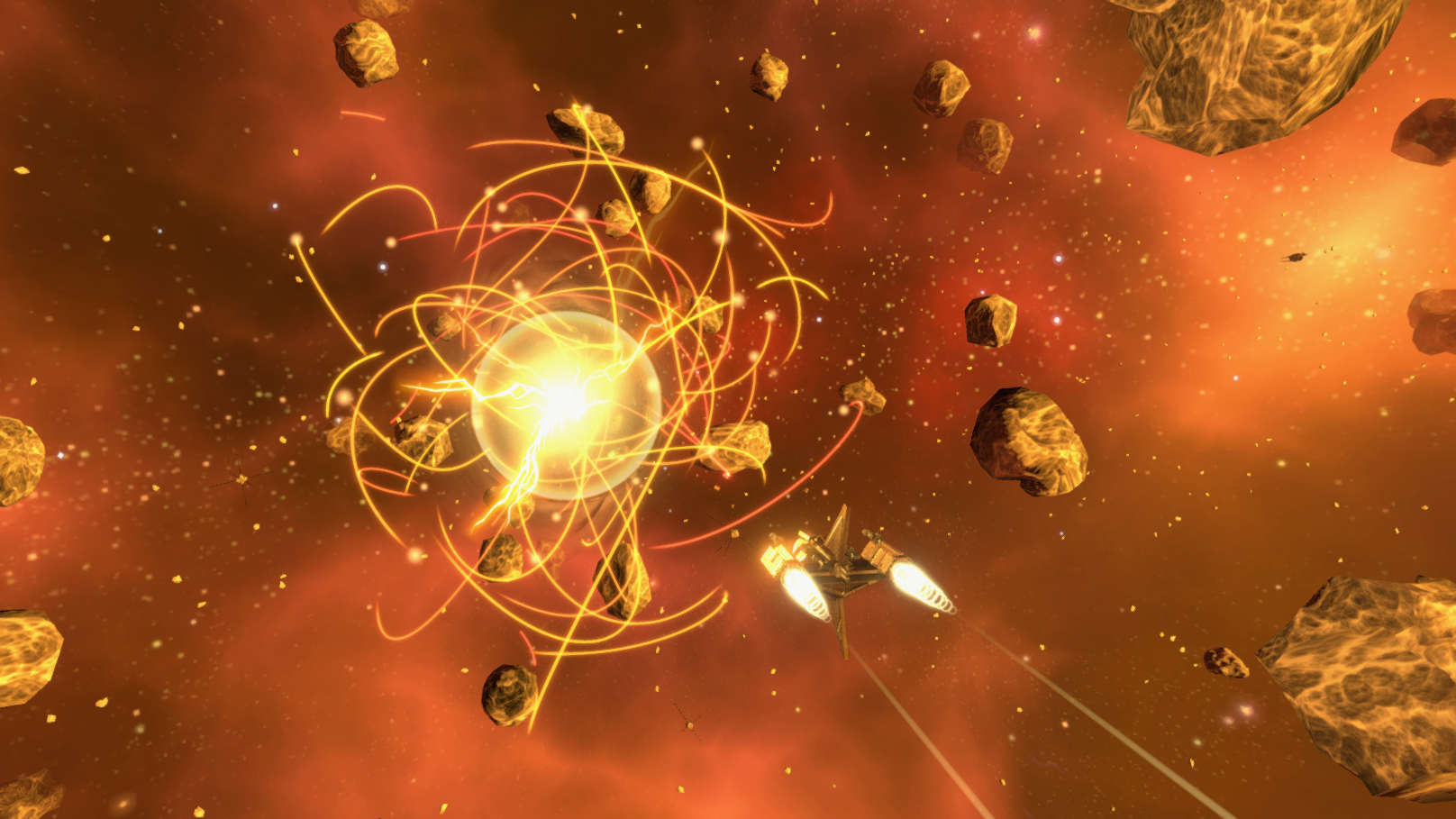 Speaking of graphics, Distant Horrible Objects (yes that is their full and proper name) had full models added, along with better, more color appropriate effects in matching storms.

The final storm thing we added were ghost ships! These minibosses guard various storm rifts, and can be the reanimated wreckage of ships you’ve previously killed. Just be careful: They’re not happy that you killed them. 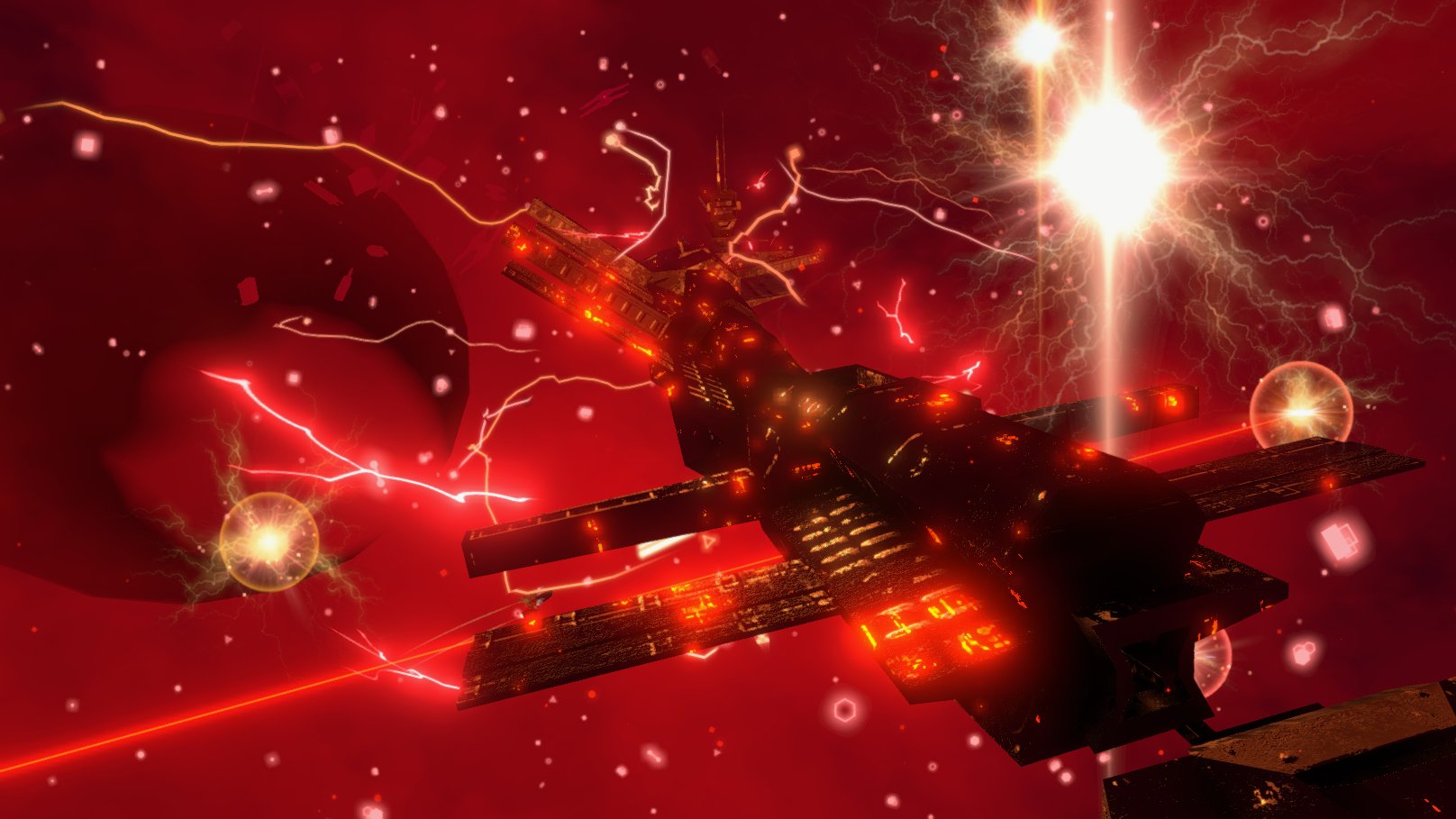 We’ve been doing some small QoL improvements here and there after the big demo release, mostly based on user feedback. Freeflight has a few changes to its controls, and docking is smart about where it tries to aim you initially.

We’re also working on yet another flippin’ refactor of spawning code, this time to allow forced overrides of where NPCs can spawn.

Also we worked on some new gun sounds, based on user feedback.

And cargoboxes are around big wrecks in all systems. Watch out for mimics!

And not too much in terms of assets this time around. We’ve got some plates and dishware, and also I’ve been wrecking a few fixtures here and there for the sake of vignettes. Also I’m working on particle effects for flak cannons, and new background effects for the Shipstar system. 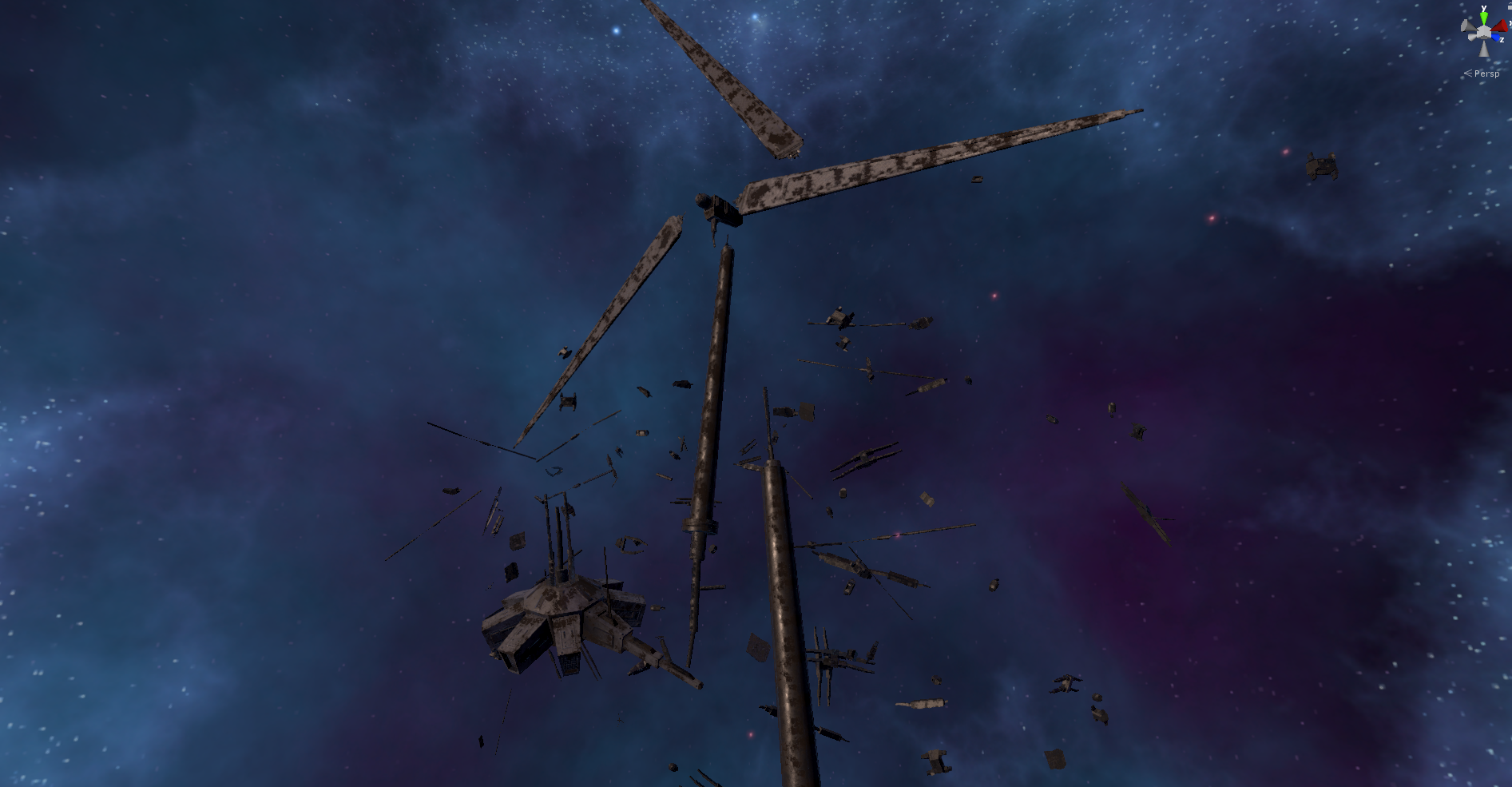 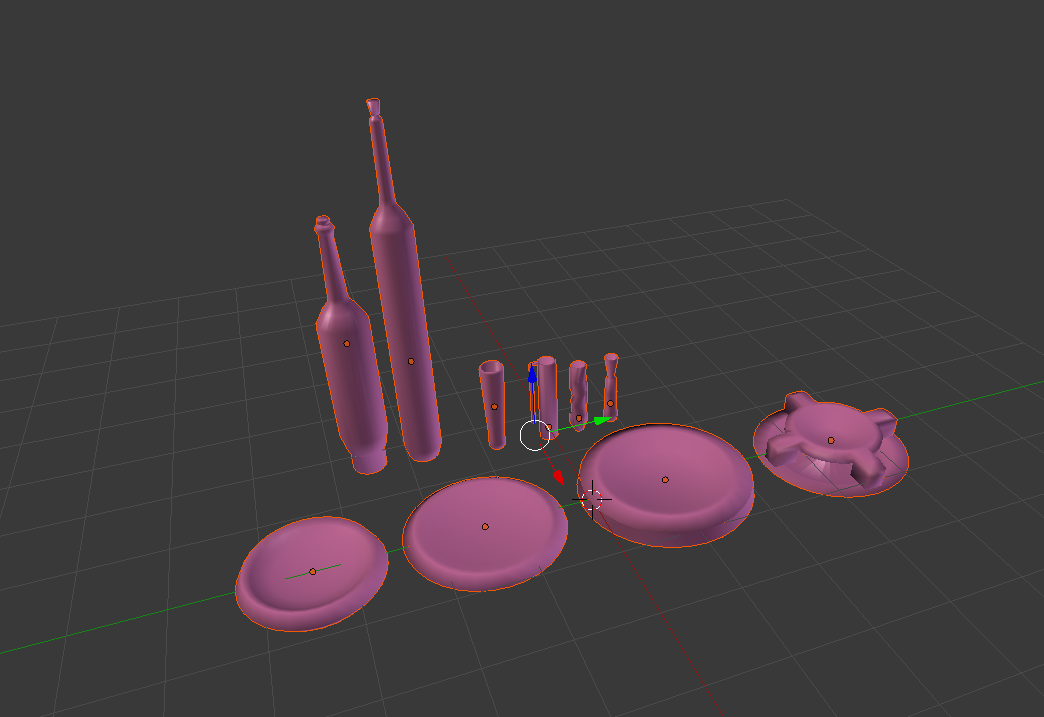 That’s all for this month, our next month’s progress bits will probably be less impressive than this, but still, check back for more!