News, news, news, some stories about the factions and some pics, if anyone now reads this little box.

First of all I want to tell you that we have had a productive time here on our side and we hope you haven't lost faith in us just yet ;). Secondly work is being made on a website that we hope will be up soon with forums, media, features and regular updates.

Now to the news of today!

We have finally made great progress on the factions(believe me, when two guys try to get along with a name, it is NOT pretty!) , that includes names, units, economic system and locations in the game world.

Antaris
The Antaris faction is based on a mix of the spanish conquistadors and other european nations warriors from the early industrial era.

The Antaris had a ship called the HMS Turning tide, this ship was the flagship of the largest and most advanced fleet in the known world, because of this Admiral Habs commanded his entire fleet to pursue the enemy whilst the enemy fled between small islands, when his entire fleet except the HMS Turning tide where close to the small islands the Korosans opened fire. The Korosans had men hidden in the bushes and woods in the islands and opened fire towards the ships with cannons and muskets, in this chaos many ships brought each other down by colliding and the entire Antaris fleet was brought down, during a single day, because of the enemy being so mighty Admiral Habs fled along with his crew in the HMS Turning tide.
Of map and of course, nobody knew where they where sailing.

The capital city of the Antaris is Karmatan which was founded by the survivors of the HMS Turning tide, Karmatan is a rich and wealthy city, for some. The citys two grand laws that where made during the day of the founding of Karmatan, one shall never be poor and one shall never be treated as an outcast, even thou these laws exist, no one strengthens their existence.

Karmatan is nowadays based on trade between it and smaller cities and is a perfect place to be in if you need to sell or buy something.

The Quekal have lived on Yaab ti'pa' as long as anyone can remember, they have as all larger civilazations have had alot of internal struggle for land, power and money.
Overpriest Tanach'tu encouraged all the people that are sons of Ki'n, K'aax and K'ak'nab' to unite and fight back the intruders that came from the sea with their magic weapons.

Utiay is the Quekals largest city and is a modern stronghold. The Quekals don't have cannons and muskets but their efficient mix of bows and melee weapons makes them very dangerous to an un expecting foe.

Utiay's economy is based on agriculture and is alot more modern than the Karmatan agricultural system, Utiay has a large aqueducts system running through the town.

Enough with the stories here is a map with names for every island in both Quekal and Karmatan. 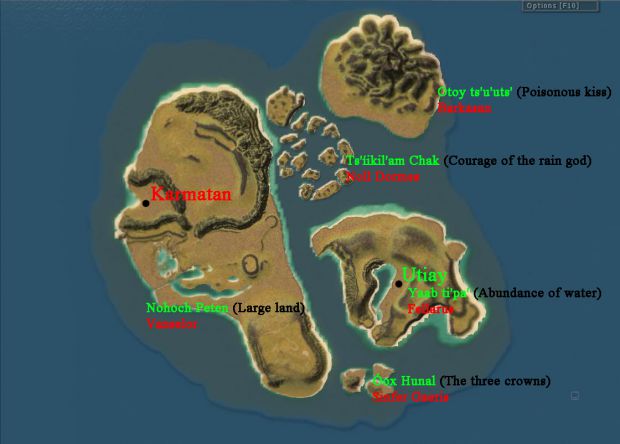 That is all for today, bäver33 out.