Over 50 new weapons to blast enemies in Brutal Doom

The Ultimate Brutal Arsenal is the next (and first of many to come) Expansion Pack for Brutal Doom. This expansion will feature aprox 50 new weapons. It's a large variety of machineguns, shotguns, assault rifles, rocket launchers, energy weapons, explosives, flamethrowers, BFGs, and melee weapons. 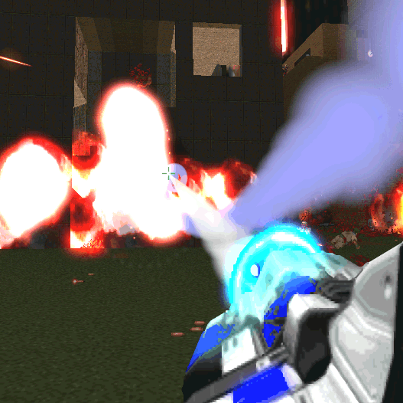 The confirmed weapon lists (until the moment):

These weapons (and their ammo) will be distributed through the map, replacing existing stuff. A pistol clip may spawn a pistol or rifle clip. A shotgun may spawn one of the two low-tier shotguns, or a rifle, etc.

I have plans (but still not sure) to put a limit in the weapons that the player can carry. Limiting the player to have a limit of 9 or 10 weapons (one pistol, one sub-machinegun, one shotgun, one rifle, one machinegun, one rocket launcher, one energy weapon, one BFG, one flamethrower, etc.).

You will able to dual wield some weapons when you find two of them.

For this, the progress on Brutal Doom v18 will slow down a bit, because until the release of the first beta of the expansion, I will not have enough time to work on BD.

i have a version of that :D
send me a email:
thekillerdarky@gmail.com!
:D
but not with fifty weapons, D:

Dude, I want that!

Never ask for a file to be delivered to your email. Secondly, never reveal the address like that.

4 assault rifles. I MUST SEE THIS!

please have doom 3 shotgun! or simmilar

The red one to your left.

Oh, dude, that rocks! I'm huge fan of Brutal DOOM and I haven't even expected something as cool as this!

Awesome. I just hope the weapons won't become too tedious to scroll through. Also these well laid out in a new campaign with new monsters would be sweeeet.

Ah man, at least keep the art style in the same direction as the original BD, else it's just going to look fuggly...

That BFG looks -way- too much of a screenshot rip.

This is great! You brought new life to the Doom community..
Keep up the good work!

... Have you ever heard of a place called ZDOOM forums for example?

Sure... but I see many old players comming back because of bd..

The weapon limit is a very good idea because if you have too many weapons choosing from them would be hard in a fight or with the mouse.

Wow that would be great expansion, imagine playing doom 2 with all this options xD
But yes the weapon limit is needed. what i like on brutal doom is that current weapons set is very well balanced, 2 or 3 more weapons could improve it but carring 50 more at once could ruint it.

Yeah, even thought Doomguy is a really strong man, holding 50 weapons could make the game crash.

You just went full retard. Do you even know how the engine works?

You have a great sense of humor.

Finally weapons that sit to the side of the screen like they should.

No, actually that doesn't fit to Doom. Why should it be like any other ****** run-to-the-mill shooter?

Doesnt fit doom? Im pretty sure doom 3 had weapons sitting to the side of the screen. Have you ever shot a gun?

doom 3 was a ****** survival horror game set in the doom universe. it broke everything DOOM 1 and 2 started. DOOM 1 and 2 were all about "run and gun" using your skill and wits to fight HORDES of baddies. Doom 3 can be completed with just the shotgun, cause you RARELY have to fight more than 3 things at one time. the pace was slow and it relied on "jump-scares" and reading through people's PDAs and other ****, like a survival horror game.
TL;DR Doom 3 should never be compared to it's counterparts, as it is a **** game. go play more COD kid

Agreed, Doom 3 was horrendous. Good thing ID Software is going back to "run and gun" with their new Doom 4.

Doom never had guns sitting to the side of the screen and people still loved it. Shut the **** up, nobody wants you here.

So how exactly will the random distribution work? When I start playing, say, Doom 2, will the shotgun behind the secret area of the first level have a chance of being one of the new shotguns instead, as an example?

Shoot ALL the guns.

This looks great, but I hope those 4 BFGs don't unbalance the game too much.
Bigger weapons need bigger demons, after all.

This sounds awesome. 50 guns sounds a little overambitious, but if you can make it happen it will be great.

Over 50 new ways to kill every, single, last son-of-a-bitch in sight? Come at me, hellspawn >:)

yo do you know when this may be comming out has it been delayed?
They said today!

This is an expansion pack for Brutal Doom. It contains 15 new weapons. I have plans to make a total of 50 weapons for this expansion. This is a very alpha test, and many stuff is still not complete. This is just made for testing purposes and doesn't reflects the quality of the final product.

Hey is there a new version of this finished? it's been like 6 months!

yes Alpha v0.2c was released in March of this year, Mediafire.com

Epic as always. I downloaded the alpha and only noticed a few errors. Only one of them is a game crasher. You can't die because if you try reloading the level it crashes. Same with loading a saved file. Also I was on IDE earlier and tried downloading using getwad to join on the public beta, but getwad couldn't find the first file epicsongs.

Anyone here know if Getwad has been screwing up lately? It does this for a lot of music wads that are required downloads to join certain servers.

WE NEED A QUAD SHOTGUN

So the Brutal Arsenal is awesome. Really cool stuff Although ever since I started using it whenever I try to load a saved game I receive this message "Expected a name but got something else." Doesn't seem to happen every time but it's more often than not.

I found out that only happens with GZDoom. It let's you load save games on Zandronum.

I got the same problem using Zandronum.

Don't save when you picked up a backpack - As far as I can tell having one causes the problem in the alpha.