You would not want to miss this news. This may be the most precious news to date ever since the mention of "The Hunt Begins"! Stay tune to what is about to be talked about! :D

It is time to let the public know that the mod is very, very close to its release. At this stage, the UA mod team is hoping to do something special because of it. Within this month or March (at the worst possible scenario), the second to the last alpha mod internal versions of the mod and so on will be caught on video and displayed to the public as we are in definite need of public feedback, and definitely some finely tuned views coming in. We will not mention where they are or where they will get posted, so if you want to see live videos of "The Hunt Begins" public videos, then it is up to you to find them! xD Note that they will be posted at random times with continuous slow or fast updates and at no estimated time of arrival. :D

But here is the bad news. It may be or may not be (depending on the audience) a 1.74 patch. The grand release of 2015 (The Hunt Begins) is close to release, that, making a patch for something that will only last like 15-40 days seems like a good effort to be placed within the grand release itself. Avoiding the confusion of the difference between what 1.74 is compared to "The Hunt Begins" would be good, too, but it is up to you guys if you want to deal with the balances of 1.73 versions until "The Hunt Begins" is released. I'm not saying 1.74 patch is cancelled, I'm saying 1.74 patch could be cancelled if the audience just wants THB and if the team agrees to stick with THB also. Up to you guys! Do you want a 1.74 patch or wait a bit longer? 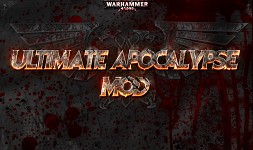 Is now officially our new logo and will be displayed everywhere possible upon the THB release. We are very glad to replace our old logo, and very soon, this will be applied as our official UA mod logo! You can see more details here:

We are doing the contest again, and we already have three other logo participants willing to publish their items in the future! You can be one of them! ;)

A gist of what we can promise you THB will bring:

Now let us talk about the THB release:

THB stands for "The Hunt Begins". It is a grand release of 2015, not a patch, and the version number will be much different than 1.74, we're talking around version 1.8. The Hunt Begins is all about the Inquisition Daemonhunt versus the evil and twisted Chaos Daemons! All factions will receive new content, and there will be so much added to it, that took us over a year (almost) to achieve.

We know we said that THB would not take too long to get released, but fortunately, it is another 1.73 release as it is BIG, and even includes two new factions to play! All races were further polished and made nicely, plus what THB will bring is pretty much finished skirmish and is the last and final skirmish overhaul. It is official.

Version 1.73 was supposed to be skirmish overhaul and final, but then over time, we realized the flaws of most factions, and so THB revamps them to an all new and fun style. We know you will like all factions, at least better than 1.73, and we hope to continue the campaign after this! :D So THB release, full skirmish overhaul with two new factions. FUN! NExt grand release afterwords? Campaign and stuff. We'll see how it goes.

Keep in mind THB grand release will not be perfect. There will be bugs to fix afterwords like 1.73 release, and we hope to continuously patch it and patch it just like 1.73 versions. Only this time, you guys will have everything, so whatever we offer, you guys get immediately! :D

We cannot wait to see the THB release at last! Sorry it took us a while to post the news.

I say that if The Hunt Begins is truly close to release, like a few weeks at most, then just wait for it. Kind of a waste to release a patch before a major release if you ask me!

Wait for the update, better have this in one go

Exactly my opinion, better wait a little longer for a big release than a quicker patch. You guys already do great work, just take your time :)

Why would anyone want a new patch for something that's gonna be obsolete in a few weeks is unknown to me. Definitely wait for THB.

As a final note thank you for the time you took to make this mod.

I'll wait but can you make the SM Honor Guard attachable by the Force Commander ,the 1st Company Captain and the Chapter Master? and can you make the Lieutenant's Leman Russ Upgradeable with Fok's wargear and weapons instead of the vanilla UA russ' weapon upgrade and lack of Wargear?

Isn't the Honor Guards already attachable with any commander? I thought I fixed that within one of the patches?

I've never tried that
and the LT's Leman russ idea?

Will you add it?

No even in the 1.73.9 the honor guard stand alone......wich is very epic, but it could be more powerfull with a command attached to it :)

Wait for THB. It's best to keep the version numbers consistent.

if thb is released in maximum 1 month and half..its useless to release 1.74 before. If more..why not ?

1.74 patch pls, I cant wait for full new version, it will take to much time, again

I vote with a 1.74 patch and then THB later on. I'd much rather wait and get a perfect, fully-functional release instead of something loaded with bugs that would just have to be fixed later anyway.

And, if I may add, BY SLAANESH that's alot of promised content. Seems like, when TBH is eventually released, it's going to be a massive game changer for everyone. I'm particularly looking forward to the new AI and maybe the Sisters of Battle will get some love? Maybe a new melee unit or two?

Sisters of Battle is getting new stuff, new nice gameplay stuff everywhere, like research and neat changes, but as far as new units go, there are none I'm sorry to say as there are none to be found...

I'm a bit confused if you want a patch or wait. It seems contradictive sort of.

Any chance on celestians getting bolters? There able to use any weapon a sister squad can, there not normally dedicated AT

I'm tossed up. Most of me wants to wait but at the same time I'd appreciate a hotfix for the IG air doctrine bug.....*begins convulsing* can't contain......the excitement.........

Yep I know of that problem...

Wait for THB. A patch shouldn't be put out if it'll be obsolete within a month by a major release.

Better wait. Don't rush it as I want to enjoy the grand release as much as possible to support this mod.

It'll be difficult but I'll try to wait for THB. And thank you for this awesome mod.

I'd definitely rather wait. So close...

I hope you will make relic units more powerful as they become more expensive (not so much the titans but the lesser relic units like the baneblades)?

PS- Im definitely in favor of waiting as well

Better wait till THE HUNT BEGINS!!

Will you guys make it 7th Edition by chance?

would love for some tyrannofex' and new assassin types aswell. but anyway really cant wait for thb forget the patch bring on the big stuff :)

I'd go for THB
Appreciate your efforts, keep up guys, this mod is awesome!

I'd go for THB
Appreciate your efforts, keep up guys, this mod is awesome!

wait for thb. id rather no bugs when its out

Wait. I'd rather play the thb asap vs patching current. Will tbh allow the apocolyzed maps to work in multiplayer?

Actually, they already do.
I only play apocalyzed maps with my friends, with the few exceptions of those maps without an apocalyzed version.

I'm happy to wait for THB but will happily take the patch if one is listed for DL :P I cannot wait to get my hands on that campaign! Really exited bout that! Keep up the EPIC work guys!!!

listen to him... WAIT.. He will protect us all along

I say wait for THB, this mod got me back into Dawn of War and I would gladly wait for it. Also can't wait for a campaign in the future!

Will the Necron have "Doomsday" Cannons and Annihilation barge?

Please release it as soon as possible

I vote we wait for THB.