Posted by UltimaRatioRegum on Dec 20th, 2014

Well, it took longer than expected and ran into a million delays (as these things also do), but I am very pleased to announce that from (roughly) now onwards, I will be working full-time on URR for approximately a year. This means my doctorate is no longer my #1 priority (it is effectively finished, and due to be bound and submitted on Jan 31st) and URR my #2, but they have been reversed – my academic work obviously remains important, but development on the game will take precedence for the coming year. 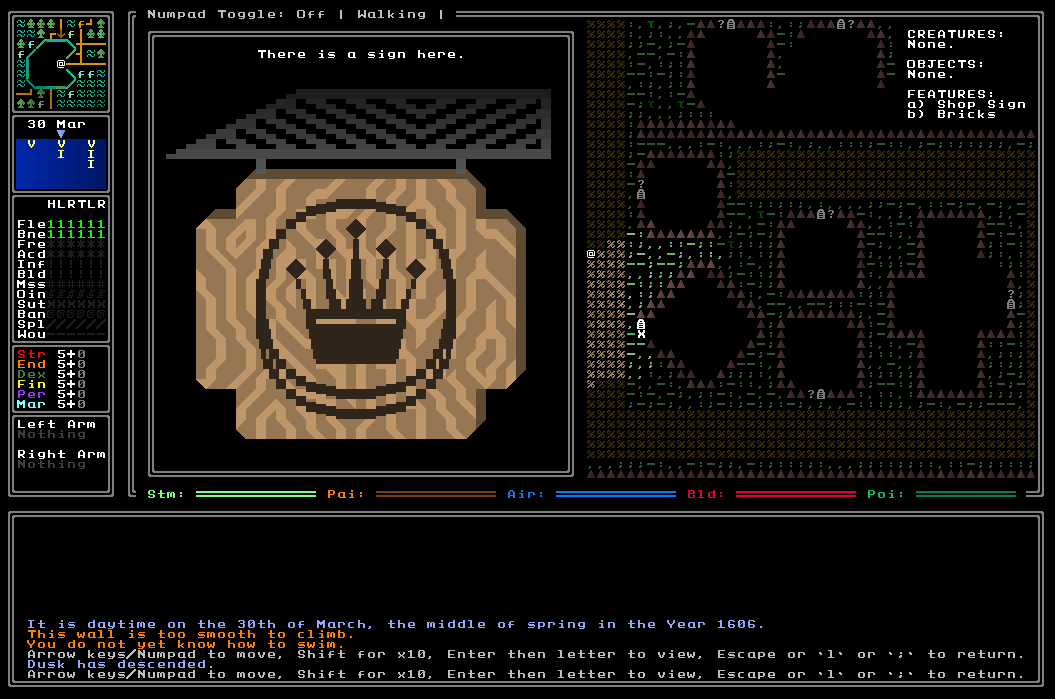 So, what does this mean in practical terms? Well, it should mean four releases this year. My plan is to release 0.7 (building interiors and major code optimization) in March, followed by 0.8 (NPCs!!) in July, 0.9 (strategy, coinage, travel) in September, and 0.10 (combat!) hopefully in December 2015, or just after the start of 2016 if not. It will mean the weekly blog updates will continue with the usual mix of URR updates (90%?) and general game design/history/criticism posts (10%?), and I’ll simply be able to spend significantly more time on coding the game and get through what I want to get through far, far faster than I have over the last three years. 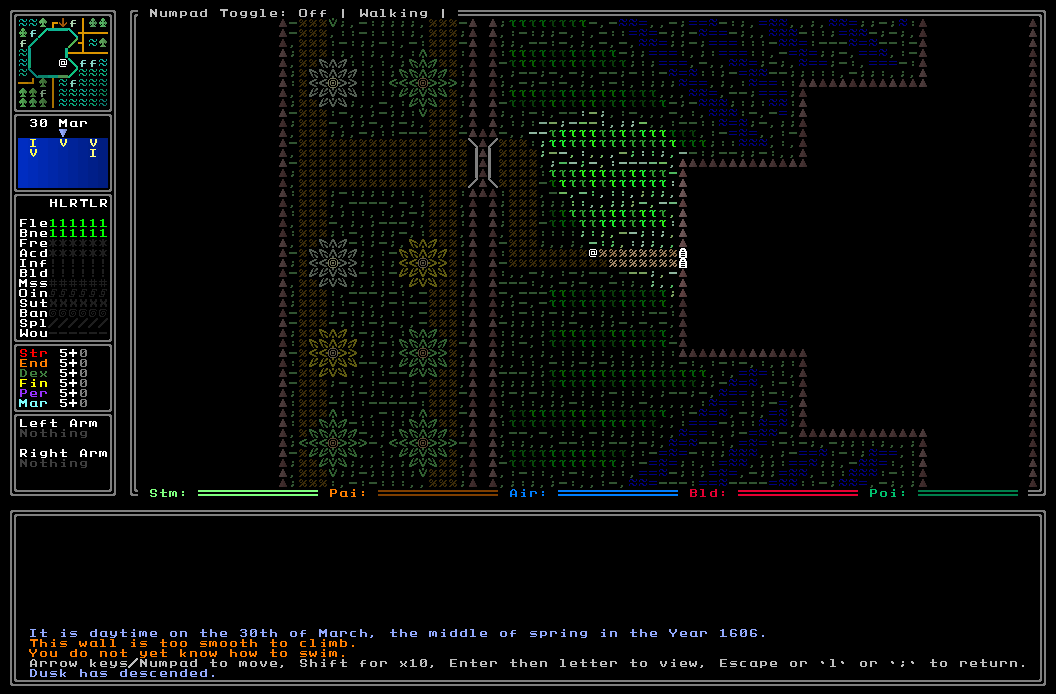 However, there are some contingencies. There are currently several potential academic positions in the works for me, and if/when one of my applications is successful, and when that research project starts, will obviously influence the full length of this full-time development period. As much as I’d like to “guarantee” a full year, the academic jobs market – especially when one is trying to very suddenly change field! – is not to be trifled with, and I cannot with any degree of sanity consider extending to a full year and sacrificing a promising position I would otherwise had taken, if one comes up. As ever I’ll keep you all posted. The other contingency, of course, is that I cannot devote 100% of my time to URR – a significant portion of my time (roughly what I’ve spent on URR in the past few years) will obviously remain on my academic work, for there are a wealth of papers I intend to publish this year and close to a dozen conferences I hope to present at (including hopefully GDC Europe, if all goes well). Regardless, this is a major increase in the time I can commit, and the speed of development should reflect this! 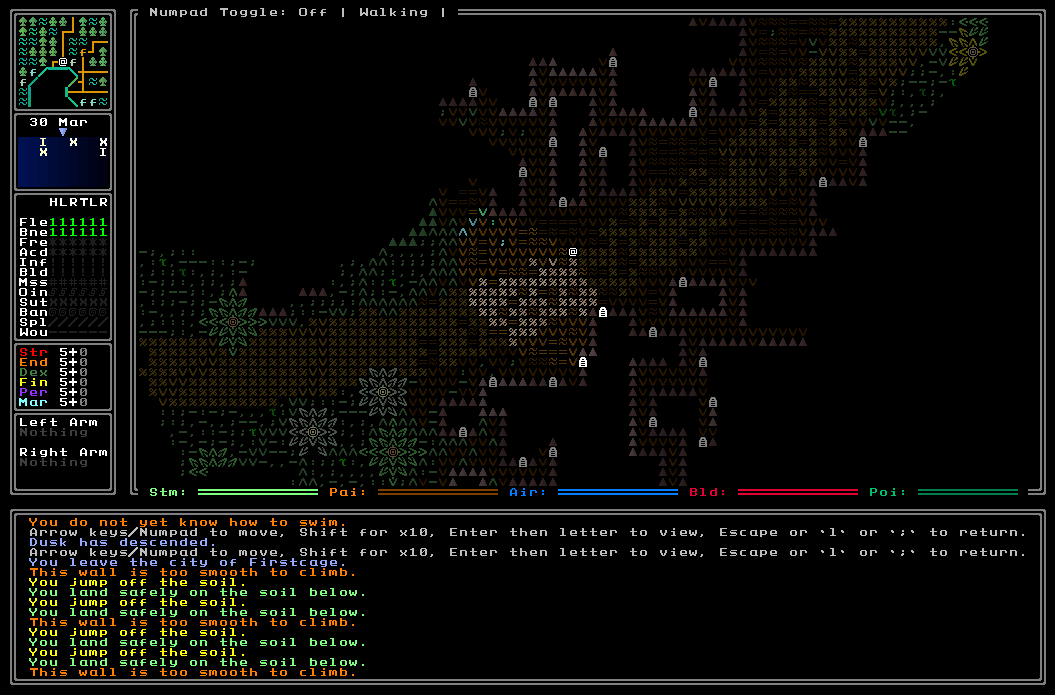 So there we go. Coding development on 0.7 will begin in the next few days once I’ve finished planning out the technical improvements/optimizations, and March is the target for major coding optimization and the generation and storage of every single interior within the current game world (or at least the overwhelming majority, if some turn out to need other releases in place first before they can be designed). I have a few other end-of-year updates lined up for this blog, then regular updates will resume in a couple of weeks. 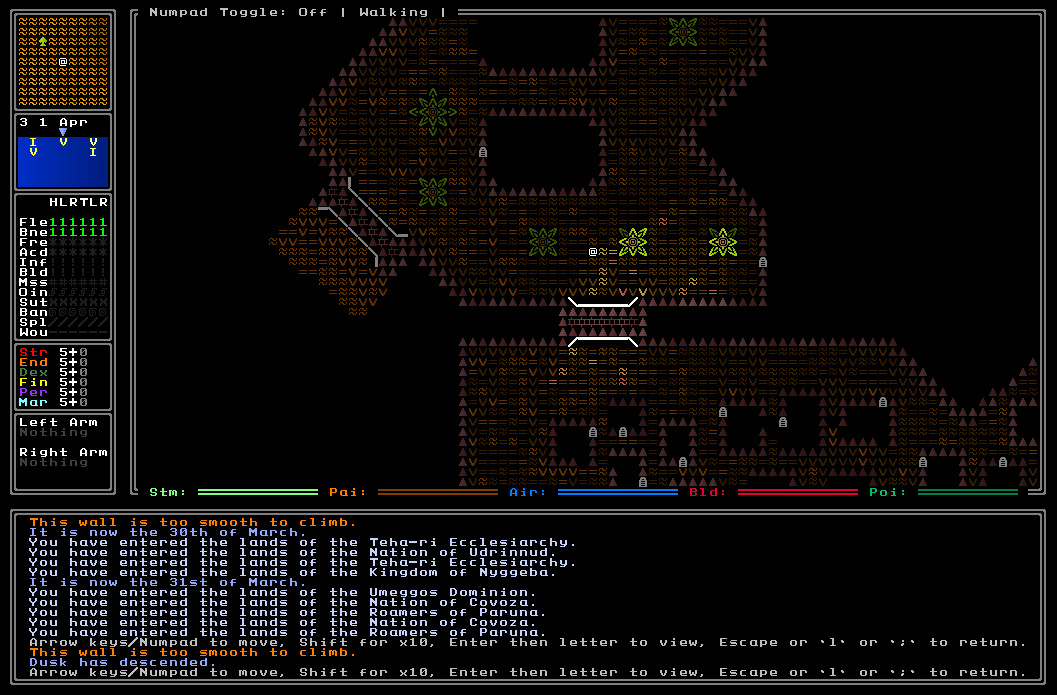 Last but not least, I just wanted to put up a brief summary of the last week’s 0.6 release. The download rate has been pleasingly rapid, and thus far I’ve had two very, very rare bugs identified, each only by a single person. Given that we hit 1000 downloads within just a little over the first two days (thank you all!) and they haven’t been reported more than once, I feel confident saying these are highly unusual rare bugs. One is in world generation and appears to take place when the game attempts to give a feudal civilization a hunter-gatherer religion (which should be impossible); and the second was a crash at a particular point of worldgen, but with no more information, so that one is sadly just too vague to pursue unless I can get an error log for it. If the person who reported the crash after the “C” and “F” of the worldgen screen is reading this, I need more information! There are a million different functions going on there and an error log is pretty much essential to hunt that crash down. As such, I’ve decided it’s not worth the effort to release a 0.6.1 (unless some major game-breaking bug appears or many more people report these same issues) and to simply push onto 0.7.0 and fix these bugs in the process.

Next week I’ll be posting an end-of-2014 summary of URR’s development (and a couple of other things), and then the entry afterwards I’ll be posting about where we go from here and the plans for 0.7! See you all then. In the mean time, you can keep up to date on my devlog, Facebook page, or Twitter!