Vote for the Ultimate Apocalypse, mod of the year 2012 today!!! We are bringing you the Grand Release this December, and thanks to the entire team, we are almost ready! If you love the old beta versions of this mod, then this mod to you will be irresistible! THIS IS THE MOD OF THE YEAR! Please vote, if you haven't yet, do so.

VOTE FOR THE ULTIMATE APOCALYPSE MOD!!!!

Above this news and above the images section of this mod page, there is a green highlighted button that shows you that right there is the button to press in order to submit your vote! Your vote is very appreciated as it will make our mod more noticed as it should be, plus it is as simple as a click of a button. This is one of the best mods for Soulstorm, if you are a fan of Soulstorm, or you like Soulstorm, then this is your mod! Vote or risk updates to come!!! 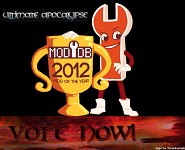 In other news, the Grand Release is coming the 20th of December!!!! 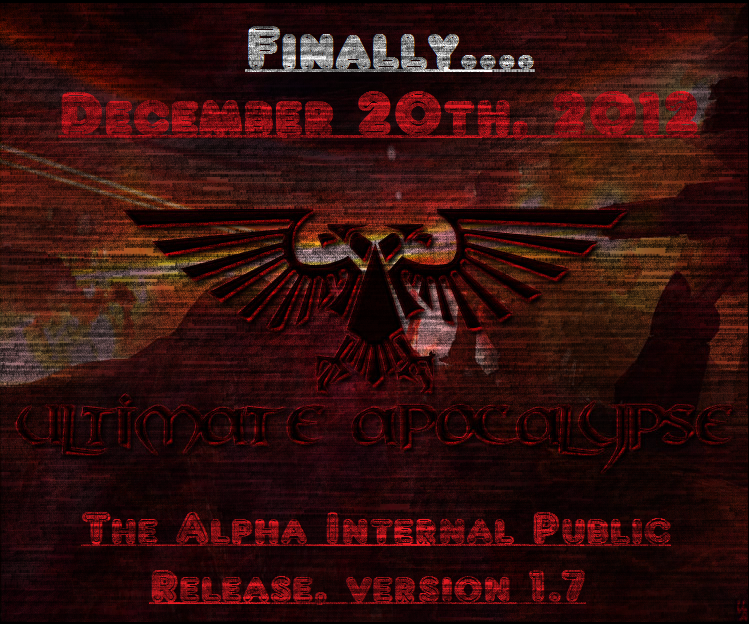 
That... is a one year old trailer featuring only HALF of what the Grand Release is about. This is no mod that just revamps something into something epic, but this mod has developed hundreds of stuff from scratch donatable to this community. If this was no DOW mod limited by the crappy engine, it is almost at an extreme chance that we should be one of the top 10 mods in the world. Only problem is, we are not as well known like the Codex mod for some odd reason, please talk about this on any form possible, new, authentic, somewhere we did not explore yet, so we may become known and share to the crowd what we are all about!

The Grand Release is no patch folks, it is no giant patch either. This is a two year well worked on super version finale of all time in this Ultimate Apocalypse mod. If you have not played this mod, you should, because here in the 20th of December, it is going to be released!

DOWNLOAD THIS MOD, PLAY IT, OR MISS OUT ON ONE OF THE BEST MODS FOR DOW!!!

And of course, thanks to Andrea Smith and John Devaux, there will be one more Grand Release immediate update to keep this mod going. Everyone who has donated to this mod has made 1.62.59 through 1.62.65 available today for public play! Please play these versions, if you enjoy these, then you will love the Grand Release, period. Thank you donators for speeding up our progress and developement throughout the years that came. You have changed my mind to release the Grand Release this year of 2012

Your donation is highly appreciated and optional.
View all donators who donated.
Comments

its 20's, where is the alpha release?

Any moment now the devs will get up and be like o **** I need to do something important today!