Twitch is a popular internet video streaming service simular to YouTube except that Twitch streams content from gameplay for example.
Some of our developers have access to the Twitch account and can Live Stream their gameplay footage of Renegade Imperial Age.

Daily Streaming
Our developers are usually streaming their games nearly every day a couple of hours.
It will mostly be announced in advance when streaming will go live.
Or you can simply follow us on Twitch and be notified everytime we go live.

Thanks
Thanks for watching! 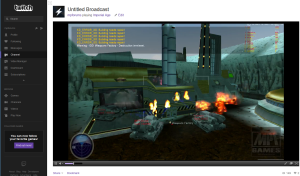