We'd like to take this opportunity to wish everyone of our loyal fans a happy new year. To start off 2013, we have a render of perhaps a lesser known Soviet tank: the T-70 light tank. 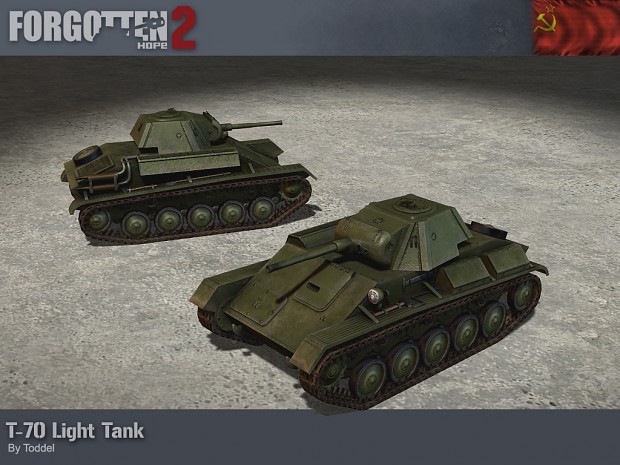 Even as early as 1942 the Soviets considered light tanks to be obsolete, especially compared to the T-34. However, light tanks had the advantage that they could be constructed in small factories that were unable to manage with the larger medium and heavy tanks. In 1942 the T-70 was introduced to replace both the obsolete T-60 reconnaissance tank and the complicated and expensive T-50 light infantry tank.

The first T-70s to roll off the production line were fitted with two engines, each of which powered one track. This was not an ideal setup, and the tank was soon modified to the T-70M with both engines mounted on the right and working together. The turret was also simplified and the mounting moved to the lefthand side.

One big drawback of its design was its cramped turret, which was only big enough for one crew member. A version with a bigger turret was produced as the T-80 starting in 1943, but by that time there was enough lend-lease materiel flowing into the Red Army that the light tank was declared obsolete and all production stopped. 8226 T-70s were constructed in total, and ours was made by Toddel.

Our winners for this week's screenshot competition is United_Stealth. You can view the winning submission here.

We are now accepting entries for the week of January 7th. If you think you have the best FH2 screenshot, post them href="http://fhpubforum.warumdarum.de/index.php?topic=16835.0">here.

You are my Knights in shining armour, thank you so much for bringing the Eastern Front to FH2.

I hope the T-60 is also represented, I like the T-70 but there's something about the DAKKA DAKKA of the T-60 that makes it funner (if less successful) to play.

Just make sure the armor model isn't retarded like in Red Orchestra where a T-60 can destroy an IS-2 from the front with a dozen shots, and bounce 122mm shots when at a slight angle. This applies to the T-70 too I guess, but it actually has decent armor. 40-45mm heavily sloped (75-80mm effective) at the front, 60mm turret (basically Panzer IVH armor from the front, when you think about it) which is about comparable to early-model T-34s.

Eager for the EF mod. Hopefully sometime soon we see the Pacific Theatre