Continuing sprite improvements and engine work are detailed in this progress update for Turnover.

Turnover Steam Greenlight campaign is live! Please head on over to the campaign page and say “Yes!” to Turnover on Steam!

First, I want to say thanks to everyone who has voted for Turnover on Greenlight. If you voted ‘no’ and left a comment why, I’m keeping an eye on the discussion so I can continue improving the game.

Someone commented over at Turnover’s Greenlight page that they were concerned about being able to clearly see the characters in game. With this in mind, I’ll be experimenting with setting the characters apart from their surroundings.

In the image above, the first step I took was increasing the light level on the character sprites. Not a major change, but it does help the sprites pop out a bit better.

Sprite Improvements, Before & After 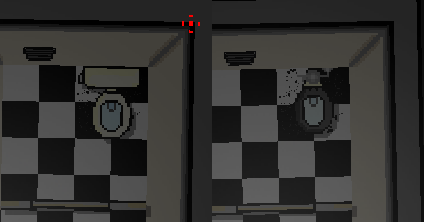 Honestly, these type of toilets are more apt to be found in an office building than the traditional ones with a tank. It’s all about the details…

Here is a window variation, something for the Automation Building levels.

Still working on the engine, improving it as I go along. It’s pretty nailed down now, and I don’t anticipate any more major changes.

I have been improving all of the character sprites, adding shading and other details. I’ll detail some of the improvements in a future blog post.