Internal Testing, dialog system, stealth aspects, and the recent changelog are detailed in this progress update for Turnover. 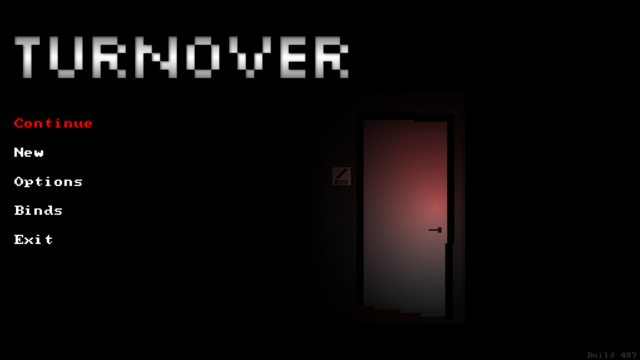 Turnover has reached an important milestone. This week marks the very first play test that represents the full game. That means Turnover, though unfinished, is playable from splash screen to credits.

This is an important test, and it should give myself and my tester a good understanding of where Turnover is as whole. I’m very excited to see how it stands up. After testing is all complete, then I am on to decoration, sprite work, and putting an Early Access build together.

Now, on to some recent progress.

After much wrangling, I have decided to ditch the Experience System in Turnover completely.

The Experience System went something like this: each enemy you kill, each trap/alert you evade, etc, would award you with XP. After so much XP, you could spend them on Perks, or awards that would improve player stats. It was very similar to many RPGs that are out in the wild.

Initially, I really liked the system, but as Turnover began to flesh out more, it felt like an awkward fit. Turnover is a tense stealth game, not made for grinding, not made for engagement (if player chooses not to). My biggest complaint was that it always felt like you had to go out of your way to gain XP, interrupting player focus.

Before the XP system, I had another Perk system in place, called the Task system. Each level had a task, such as not being alerted, or not making any noise. Upon completing the task, you were awarded a Perk at the end of each level. I ended up ditching this system because, after so many tasks, you could get enough perks to be god-like, wrecking the balance between those who obtain perks and those who don’t. When I cut the tasks in half, it felt like you were constantly waiting to do tasks, yet again interrupting player focus.

I had been brainstorming a replacement for the XP system for a good couple of months, and I was at the point where I was going to ditch the system altogether. After much thinking, I decided to implement a new Perk system, one that needs testing. Overall, I am very pleased with it compared to the other two previous systems.

Here’s how it works. The perks are meant to aid the player in a secondary way. As an example, that means no changes to player speed, but maybe an improvement to the amount of fatigue a player experiences, things like that. 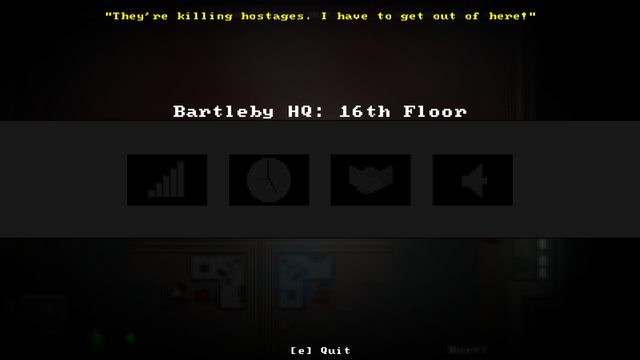 There are 4 perks in the game (notice the icons in pause screen shot). There is no constant tasks or XP to acquire to unlock them. Instead, there are 4 “hidden in plain view” objectives scattered around the entire game. For example, you may find a worker who has a request. Satisfy his or her request, and you will be awarded a perk.

I’m happy with this system because it rewards the player for keeping an eye out. Acquiring all of the perks won’t make Clea god-like, but will instead help take the edge off of the more difficult sneak situations later on. 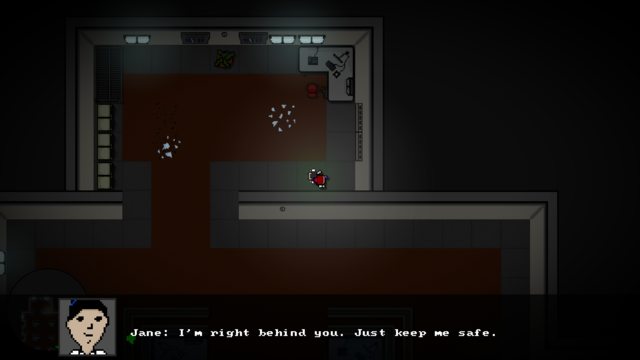 NPCs will now speak to the player when first recruited. I implemented a dialog system because I implemented game play scenarios that require NPC dialog (ahem… perks….) On top of that, it adds a little personality to the NPCs.

Recently, I’ve been adding a lot of little things to enhance the core stealth game play. One example, as shown in the GIF above, is vent covers.

There is a lot of “vent play” in Turnover, so it makes sense to have the openings covered that need to be (loudly) kicked open. So now, the player has to make sure there are no enemies around before entering or emerging from vents.

Also, there have been many tweaks to enemies and their reactions.

Often, my tester would tell me “Alright, so bumping an enemy alerts them, stepping on glass alerts them, hearing an explosion alerts them, but seeing a grenade whiz by doesn’t?” Point taken. Now, thrown objects will draw the suspicion of enemies as they go flying by them.

Here are the important changes to Turnover since the last progress report.