Internal testing results, such as game play, camera, and effects changes are detailed in this progress update for Turnover.

Turnover’s first internal round of testing is finished. The test yielded 5 hours of recorded footage, 80+ screenshots, and 3 pages of feedback notes. Not too bad at all, actually. Up to that point, each level had already been tested individually as they were created, and other elements were spot tested when finished. So, most of the issues pertained to the overall game play elements, as well as level order and difficulty.

So, what were the major results of the test?

Let me detail some of the results.

Security Servers now have a preview look ahead, where if you press a key at a server, the camera will pan and show you all of the security systems attached to that server. The pan can be canceled and brought back. On top of that, if one of the connection lines are yellow, it means that disabling the server will trigger an alert, causing enemies to come running.

This should remove frustration and unnecessary guess work when it comes to servers and what they control. 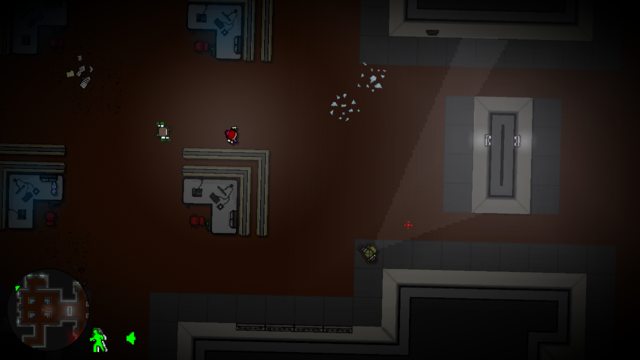 Previously, all NPCs and enemies had a light that emitted from them. This was to help the characters pop out from the world. I was never too found of the round light and was looking to replace it.

In the screenshot above, you can see that the light has been replaced with an outline, which I think its much more visually pleasing. Red outlines indicate an enemy, and green outlines indicate a friendly, as shown with the Worker the Sentinel respectively.

The player’s white light above will eventually be replaced as well.

I added an effect where liquids cause footsteps. Simple, but neat. It’s sometimes easy to overlook little details. When I start the next art pass, I’ll be looking into adding more effects like this, as long as they are unobtrusive and feel right.

As usual, here are some important changes to Turnover since the last progress report. Most of these are the result of the internal test.