In making a new level for the show, Sprout has found itself as almost an entirely new game. See how.

I've been busy. I've been rebuilding a new level progression into the old editor so that we can have something good and playable ready by the time TooManyGames starts tomorrow afternoon.

Here's the schedule: Tonight, pick up my old friend Mark from the airport and then force him to play through the level build to make sure it's long enough to get 20-30 minutes out of.

Tomorrow morning, head out before 9 am and make the trek to mysterious Philadelphia, where the founding fathers wrote the first video game in 1776.

We've redone some major aspects of the game here. Perhaps most noticeably above is that grass no longer grows everywhere- now, it signifies areas where trees can be planted and grown. If the columns, stones, and grass in the foreground isn't enough to tip the player off that "Hey! Look! Listen!" then hopefully the grass going will do the trick.

Second, you can see a floating platform. That should give you some kind of an idea about what's happening here. We're moving away from the more slow and dramatic kind of pacing that you saw in earlier videos. We've upped the speed ~50% and added in some more traditional platforming. Long story short, Sprout the Game is getting a platformer-esque makeover.

You'll also see that the above picture shows grass in the foreground. "How could this be, you ask?! Everything is dead!" Well, yes. That was old Sprout. This is New Sprout! 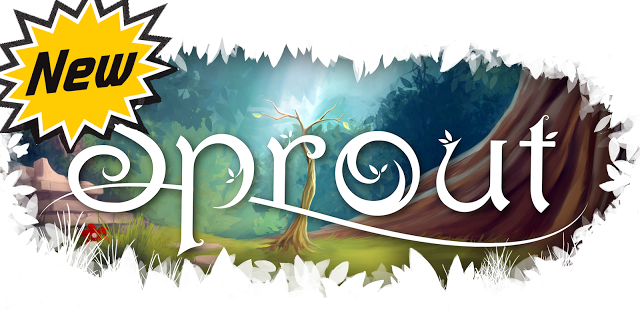 Okay, just kidding. But basically, this version is more or less a game that takes place entirely within a person's (read: mine) memory. Each puzzle represents a specific memory and occasion, each unique object has it's real life counter-piece. I'm not sure how other people get with stuff like this, but I love dissecting things like this and I hope players will get some entertainment out of it as well.

There's a lot of things left to add in, but we're pretty much out of time now. To tide you over, here's a short video showing off the new cave terrain. I wish I could give you something more, but I want to keep some stuff on the proverbial "dl" until at least Monday.