Changes to the way harvesting plants works to avoid the player selectively breeding the forest.

Posted by PokingWaterGames on Nov 25th, 2014 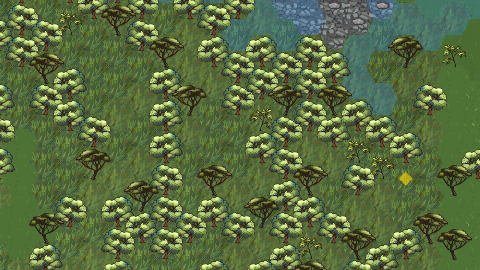 This solution was too well-engineered for a game set in the Paleolithic era, and it wasn't very fun to constantly be cutting down trees but trying to avoid/remember the fruit producers. So now, food harvesting has changed. When the harvest button is clicked in the menu, all the potential hexes that can be harvested are marked on the map.

Almost every tree and bush has a chance to produce fruit or seeds when it is harvested, and the type of produce varies depending on the species of plant. Some plants will produce nothing, and others will produce a random amount of food. The player won't know what they'll find until the harvest action is complete. They also won't be able to tell which hexes will be fruit-bearing, so cutting down a whole forest will mean the loss of potential harvest locations.

After a certain amount of time you can harvest the plant again, unless it's been cut down or died of old age.