First information on the upcoming title Trap Mansion! Created by new start-up Too Easy Games! (four idiots who are very aware they do not have a clue what they are doing)

Come children, gather round! Let us tell you a tale of how four idiot graduates somehow managed to start a game studio and create a game. (almost)

We recently graduated from Abertay in Dundee, Scotland. We worked together on several little silly projects during our time there, we enjoyed it so much we got the crazy idea that we could do it for a living. So without further delay, we give you our first attempt at a game!

So… as you may have noticed, we are making a little game called Trap Mansion. It’s a lovely little game that takes place in a haunted mansion that is bursting with boobie traps. The player will take control of many unsuspecting individuals who have had the misfortune of stumbling into the wrong building. It’s up to you to try and lead these poor souls to safety.

You will be required to Run, Jump and Slide your character to safety. Different traps are avoided in different ways, like the totally not dangerous Suit of Armor for example, which requires the character to slide under the swing of the blade. 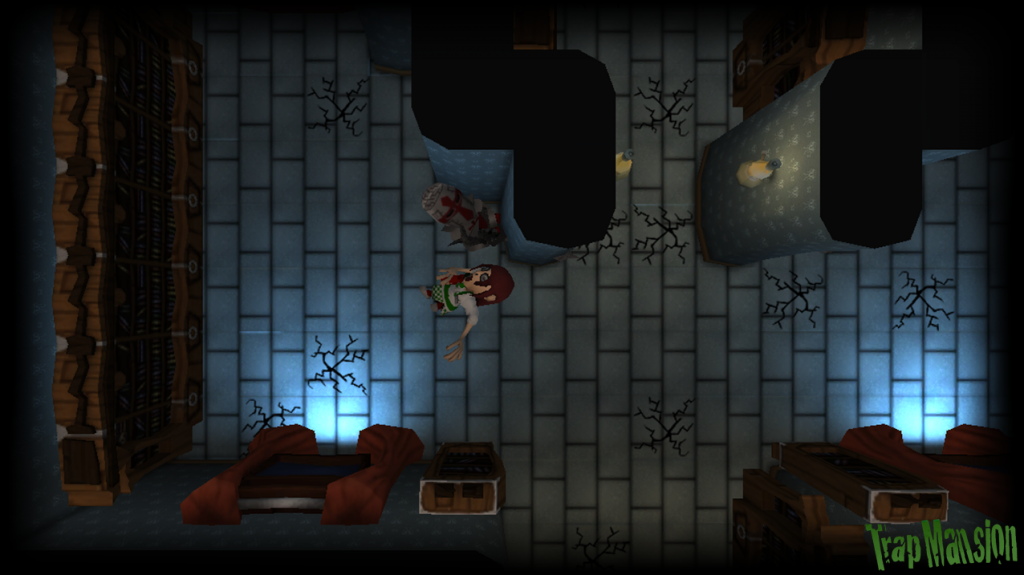 It’s a blend between memory and twitch reaction games, some traps will kill you flat out, and others will have a visual warning which will require the player to quickly react…. or die. Tie that in with some, beautiful environments, ridiculous selection of traps, awesome level design, collectibles and achievements, and we have a nice wee game that doesn’t punish you for a single mistake you make. (sarcasm) 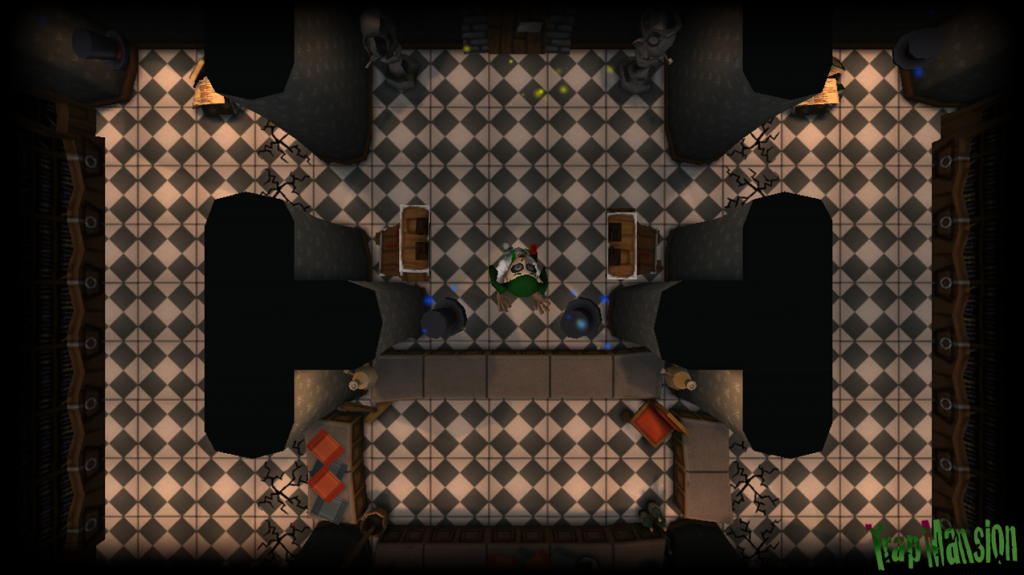 Feature: Randomly Generated Characters!
We have LOADS of potential character variations, and to add to that we also have randomly generated unique names for each character upon their untimely demise, which the player then gets to see on a nice little gravestone that pops up on screen to pour salt on the wound. Which brings us nicely to our next feature!

Feature: Personal Graveyard!
Each time you fail and a character dies, his or her name, and demise is recorded and logged. Once a player completes a level they will be treated to a post level roundup of all their statistics, because everybody loves statistics… right? Anyway, among all of these stats there will also be a button that looks strangely like a tombstone, and if the player hits it they will be warped away (standard menu transition) to their own personal graveyard for that level! This will show the names and deaths of all the characters featured in their best run of that level. If you manage to beat a level without dying, you will be treated to something special when you visit the post level graveyard.

There is also a global graveyard which can be accessed from the main menu, this is where you will be reminded of all your failures, a monument to your sins as it were. Here you will be able to swipe through a seemingly endless line of gravestones, each featuring a name and type of death engraved on it. Every single time you fail to save a character they will be sent to the graveyard and a new grave will be added. If there just so happens to be a certain gravestone that tickles your fancy, you can share it on Facebook or Twitter! You will notice two little icons sticking out of each grave, if you tap those a zombie hand will burst out of the ground holding the icons, this will allow the player to link their social media accounts so they can post and tweet hilarious character names and deaths until the interweb explodes. Speaking of death…. next feature!

Feature: Death!…. so much death
Now, you are probably wondering how we can justify calling death a feature. Well…

We put a lot of focus on how we could kill the main character, and after realising that there was going to be a lot of dying in this game (you really have no idea how much death there is…. so so much death…), we decided to take the focus away from a single character and use randomly generated folk instead. We are doing things a little backwards by treating the Mansion as the star of the show instead of the characters, this is because of our relentless persuit to come up with new awesome ways to kill these unsuspecting folk. We have tried to do everything we can to make sure dying is always interesting, whether that be in-game when a giant demonic hand bursts out of the floor, launching a helpless little Pizza Delivery Girl called “Derpina Marmingblabwibblesteinsmith, the third” up into the air as her undelivered pizza spills out onto the floor. (Yes, this can actually happen) 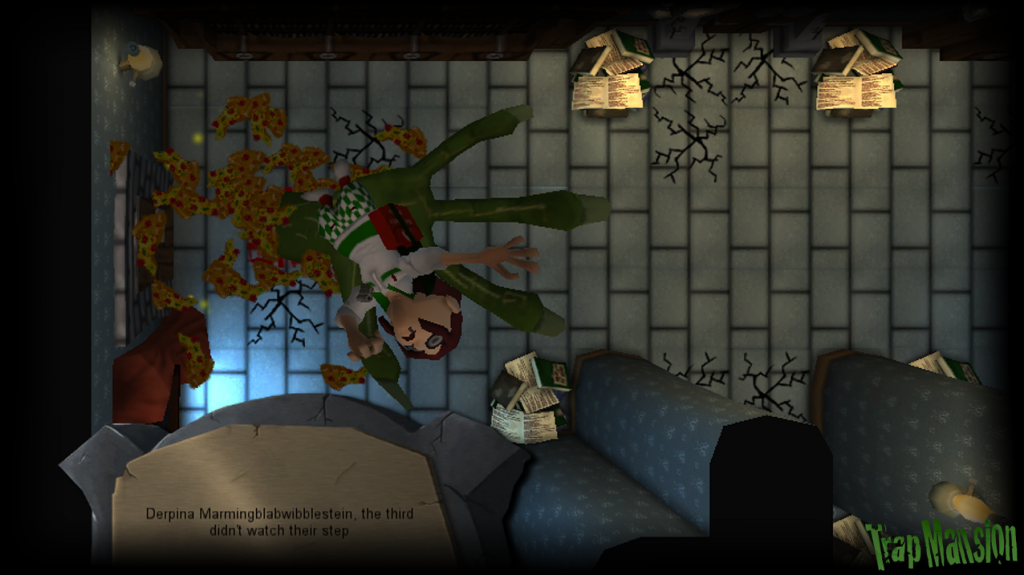 So that’s it for now, if you want to see more about the game in the coming weeks, Like & Follow us for more news, screenshots and the inevitable epic trailer.

Trap Mansion will be coming to an iOS device (and hopefully a PC & Mac) near you this Halloween! …….. if you buy it.

Bonus News!
We are also going to test the waters with the PC/Mac version on Steam Greenlight at the end of August. This test version will look very much like the mobile version of the game, just think of it as a very early, playable preview. 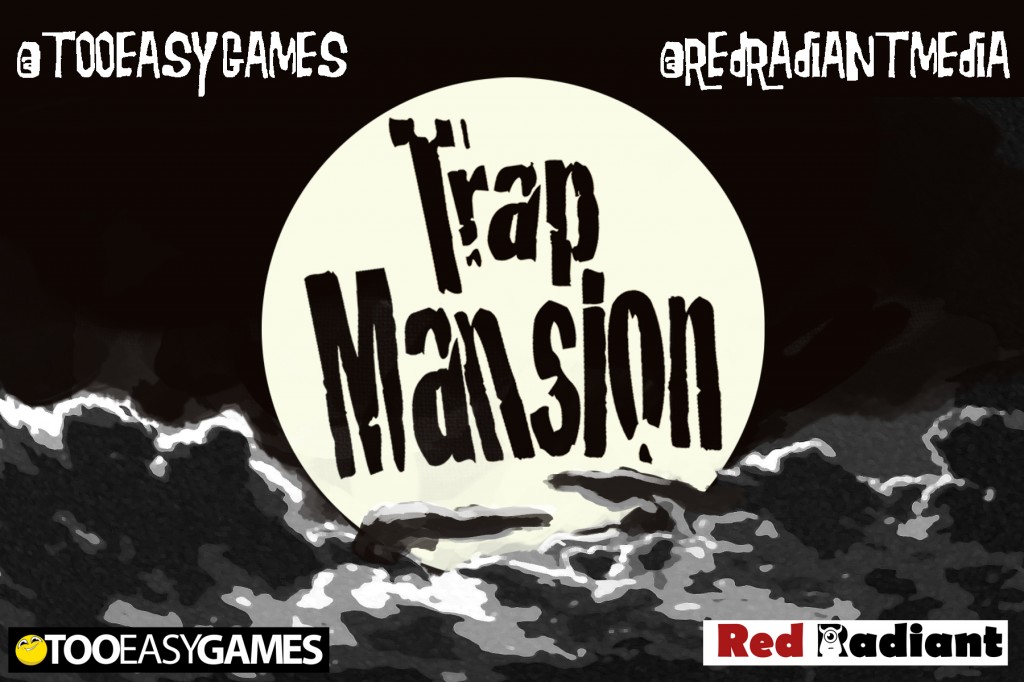