Today we are showing off the Citroën Type 23 U light truck, one of may transport vehicles that served the French in May 1940.

Today we are showing off one of the many transport vehicles that the French depended upon during the German invasion in 1940, the Citroën Type 23 U truck. 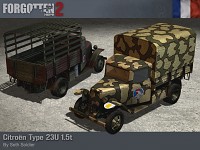 Introduced by Citroën in 1936, the Type 23 U was light truck with a capacity of 1.5 tonnes. Sharing similar styling to the Traction Avant series of cars, it also used the engine from the 11CV. With the start of the war in 1939 the French Army would order 13000 Type 23s. With some simplification to the design such as flattened fenders, almost all of this order was delivered in 10 months.

6000 would serve with the Germans after the armistice, with production of the related L and R models continuing under occupation. It is claimed that many of these vehicles made for the Germans were subtly sabotaged by marking the fill lines on their oil dipsticks wrong. Ours was made by Seth Soldier.