Next version will be an emigration to 3D and implementation of LWJGL.

The next version of Trashcan 2346 will be an emigration to 3D and will focus on implementation of the LWJGL Library and OpenGL.

Trashcan 2346 will be the same game but it will now be represented in 3D. The text messages will now be shown in a console in the 3D window.

I will probably not release a new version until you can do everything you could do in text, in 3D.

I almost work on Trashcan everyday so it will probably not be to far into the future.

My long term goal is to make game that gives you a new experience every time you play. With a dynamic world, AI, etc. 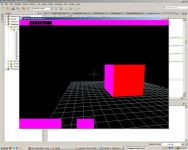