Today we are showcasing a series of hand grenades that will outfit our upcoming French faction.

Today we are bringing our own fireworks to the party in the form of a series of French hand grenades that you will be able to use. 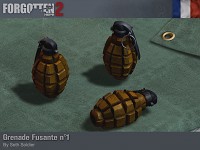 The F1 was the first modern French hand grenade, taking the classic grenade shape of a knurled cast iron ovoid. A defensive grenade, it would typically throw about 10 dangerous fragments up to 200 metres. Originally fitted with the Mle 1915 fuse, this was soon replaced with the Brilliant automatic igniter. This grenade would be copied by both the Russians and the Americans. 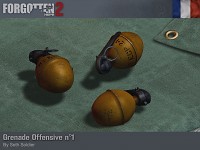 The OF1 was designed as an offensive hand grenade, more useful in the assault than the F1. The casing was thin sheet metal pressed together in two halves that did not throw off dangerous fragments very far. Grenades were delivered without fuses, and the soldier would have to poke a hole for the fuse in the filling with a rod before assembly. Fuses were the same as the F1. 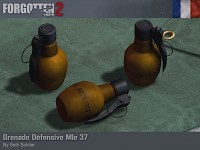 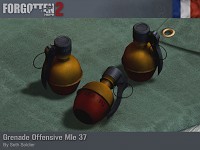 The Mle 1937 grenades were modifications of an earlier design in 1930. Both featured a flat base, and now had an internal tube to make inserting the newer Polish designed Mle 1935 fuse easier. In function they were identical to their older cousins. The yellow and yellow/red paints indicated the type of explosives used as filler. Our grenades were made by Seth Soldier.