It is the Third Age of the Sun in Middle-earth, but in the deeps of the great forest a gloom gathers. The Elvenking Thranduil has been the leader of his people since the War of the Last Alliance at the close of the last Age but in the long centuries since, ominous rumours have troubled the borders of the Silvan folk. As the Elvenking looks out upon a world changed, he must make a choice: merely to defend his ever-shrinking realm, or to risk war once again on his own people’s behalf.

It is the Third Age of the Sun in Middle-earth, but in the deeps of the great forest a gloom gathers. The Elvenking Thranduil has been the leader of his people since the War of the Last Alliance at the close of the last Age – the battle that saw his father Oropher slain, and from which he led back home a host that was scarcely a third of the size of the one that had set out.

That war saw the defeat of Sauron, but in the long centuries since, ominous rumours have troubled the borders of the Silvan folk. Now, more than rumour stalks the fringes of the forest. Evil stirs under the eaves in the southern reaches of the wood, whence Oropher removed his people long ago. Cruel people of the Witch-king settle at the sources of the Great River, and Orcs multiply in the caves of the mountains. And to the east, a powerful folk has emerged, slaying or driving before them the free Northmen who once dwelt south of Celduin.

These great movements of peoples have brought war to the kingdoms of Men. The vigilance of Gondor has failed. As the Elvenking looks out upon a world changed, he must make a choice: merely to defend his ever-shrinking realm, or to risk war once again on his own people’s behalf. 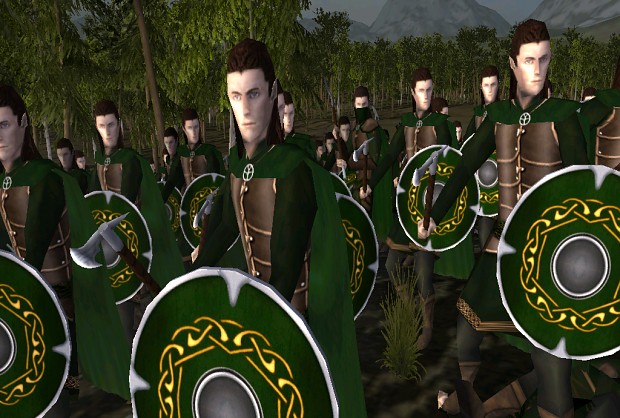 The woodland Elves have never had great store of metal for weapon-smithing, and those who go to war often arm themselves with bow or spear. An axe, however, makes a reliable weapon as well - especially when it is light enough to wield in one hand. The Silvan Axes, unusually for the people of the Greenwood, train solely for melee, holding off foes as part of a line of battle, where it is often their role to defend the lighter archers arrayed behind them. They are well-trained and disciplined, and their style of fighting, with axe and shield, makes them suited to attack as well as defence. 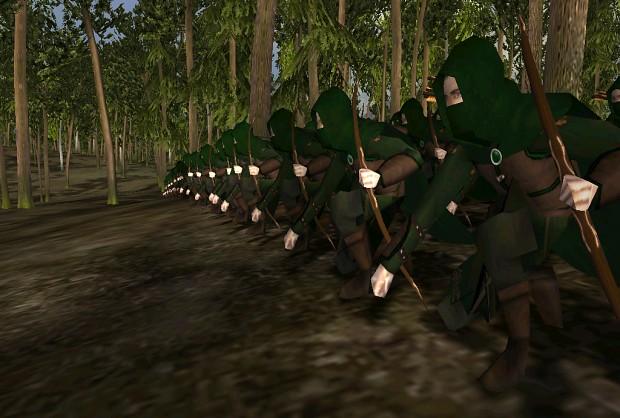 The dense forests of the Woodland Realm provide little opportunity for massed volleys of arrows, but the Elves who dwell there learned long ago the value of striking down a foe from a distance. Greenwood Bows are the archer companies trained in those forests, skilled in the arts of stealth and ambush. The axes at their belts are sharp, but their light hunting leathers are little protection against a spear thrust. Thranduil's people must remain vigilant against new threats from the lands beyond their borders, and these archers are a boon to any Elven host. 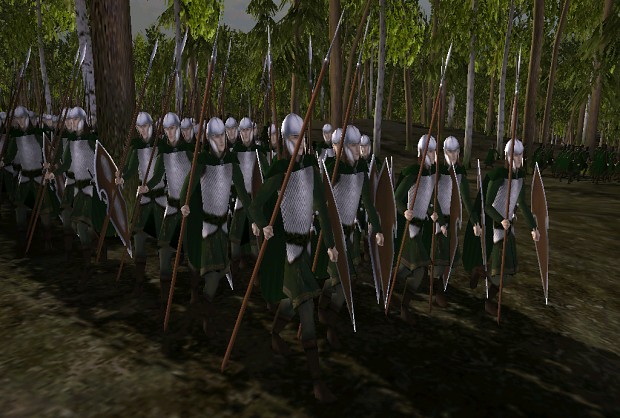 These are some of the best-armed guards and warriors of the Elvenking and formidable defenders of the Woodland Realm. Protected by strong yet light Elven scale and burnished helms, they are a resilient arm of the Elven host. While often defending Thranduil's halls, if called upon to fight in battle they provide a sturdy bulwark for the many archers and lighter troops fielded by the king. Their large shields and skill with their slender spears make them reliable defensive troops, whether standing against foes who threaten their homes or ranged in a battle line against hordes of enemies. 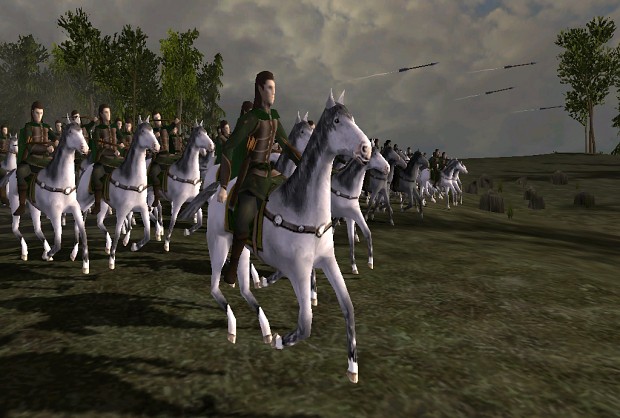 These lightly armed riders bear a bow and long knife into combat. Their normal duty is to patrol the outskirts of the Woodland Realm and give early warning of enemy movements, but they are swift and deadly in open battle as well – provided they are supported by hardier troops. Greenwood Scouts often range along the flanks of a battle line, letting fly their arrows from horseback with unearthly accuracy and riding down fleeing or poorly disciplined foes. 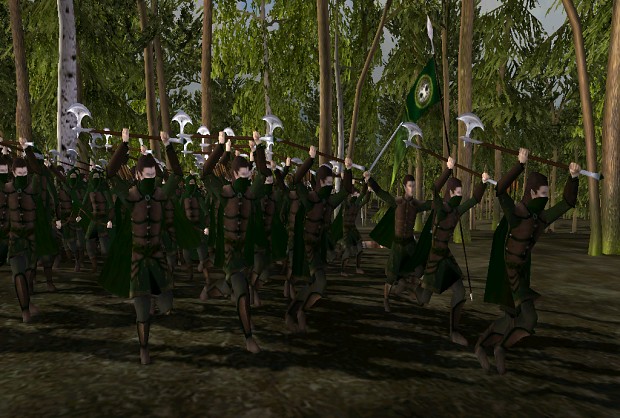 The Elvenking's halls have many guardians - some seen, some unseen. The Greenwood Guards are among the former. Famed for their skill with the bow, they also wield great axes against foes who close to fight in melee. These are among the strongest troops available in the Woodland Realm, suited for a variety of roles in battle. Their leather armour is light enough to ensure they will not tire quickly, and stout enough to withstand blows – but prolonged fights against disciplined foes are best left to more defensive troops. 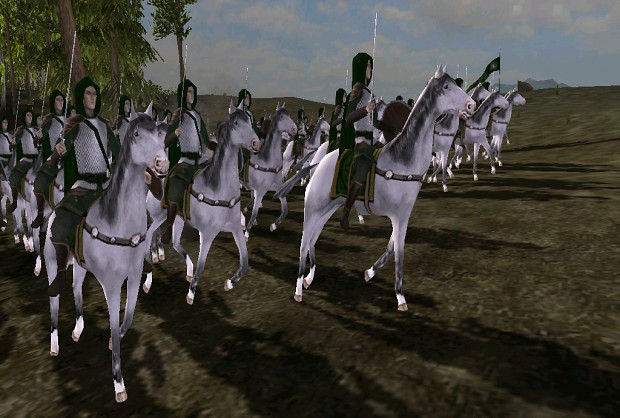 These riders are better armed than the Greenwood Scouts, suiting their role in battle. They bear sword and shield and wear flexible scale armour that protects while allowing freedom of movement. Centuries spent defending their shrinking lands against Orcs and other evils have honed these riders' skill: though they are not shock troops, the swiftness of their mounts and the valour of their hearts make them a threat to most foes save well-trained spearmen. 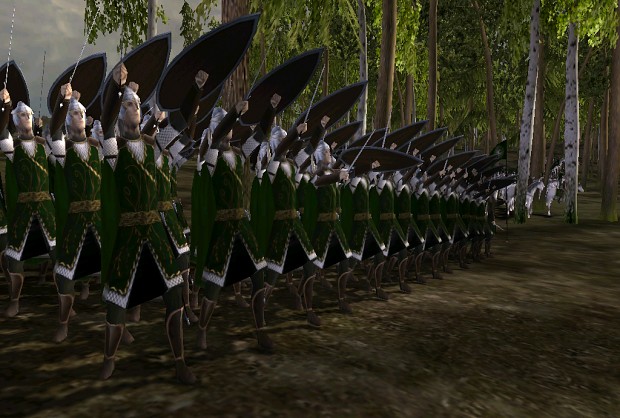 These elite troops are armed and trained in the fashion of the Sindar, clad in armour of leather and scale and bearing fine helms and large shields. While many in the Elvenking's forces prefer the bow or spear, these warriors wield long swords in battle, and their skill and courage makes them the most dependable troops in the realm. Entrusted with their lord's life, these are among the best trained soldiers in the kingdom, equally able to stand and hold a critical point in a battle line or to charge the enemy in a rush of glittering blades. 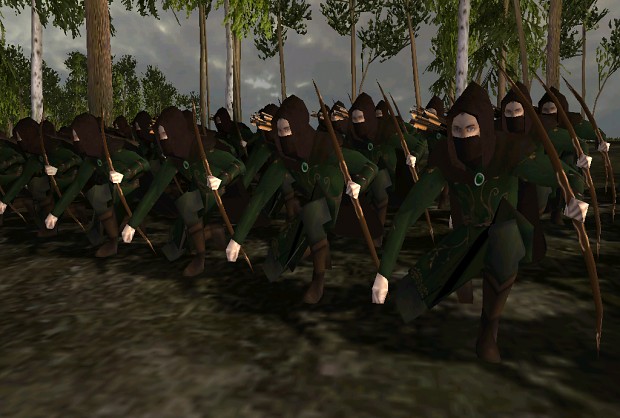 Many of the Silvan folk do not live in great Elven cities or settlements, but in smaller communities; some take no permanent homes but wander between villages and hunting grounds, moving according to the season or for some other purpose. It is best to band together in the wild, so these Silvan Elves will often be found in companies of skilled and stealthy bowmen who can take down their prey unseen or avoid unwelcome watchers. While their keen eyes make them deadly hunters, they are lightly armed and carry only a knife for close fighting, making them better suited for springing an ambush or shooting down foes from behind a battle-line of stronger troops. 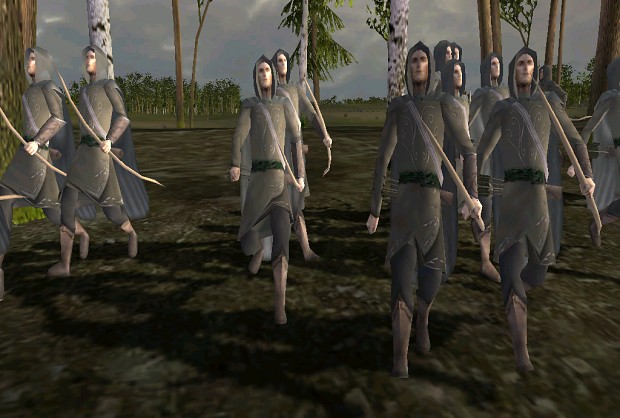 While the Galadhrim are most commonly found in the land of Lothlorien, like other Silvan Elves they sometimes wander in the outer world, often gathering together into companies of archers for protection during their travels. A captain who takes these Galadhrim into his host will find them dependable and disciplined marksmen, not shrinking from combat. Living near dangerous foes they are used to conflict, but are not as heavily armed as others in an Elven host, and are best kept from melee.

Love this faction! I am looking forward to what you have in store for the next elvish factions