Today we are showing off the main French light anti-aircraft cannon, the little known CA38 25mm.

Today we are showing of a render of the main French light antiaircraft gun, the CA38. 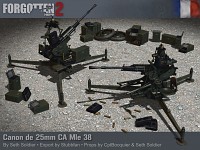 The Hotchkiss company had presented their 25mm light anti-aircraft gun to the French military but it was rejected due to a low rate of fire. Hotchkiss then turned abroad, licensing the design to the Japanese Navy to become the Type 96. A small number were ordered by the Spanish, and the Romanians placed a large order for them as well. The French anti-aircraft program was focused on larger strategic guns and broadly considered infantry machineguns to be sufficient on a tactical level.

In 1938, following their observation of the Spanish Civil War, the French had a change of heart and with their preferred Schneider 37mm gun not finished and war on the horizon they confiscated the Romanian contract weapons.

These Romanian guns would be adopted as the modèle 1938, and were fitted with newly designed single mount tripods. However this tripod was considered to be a rather poor construction. With a new mount that was considerably more robust the gun was adopted as the modèle 1939, but these newer models would remain relatively uncommon in comparison to the earlier design by May 1940. 512 of the Mle 38 and only 62 of the Mle 39 were produced and with the troops by the Armistice, greatly limiting the French Army's ability to counter the Luftwaffe. Our CA Mle 1938 was made by Seth Soldier.