Post news RSS Too big for the comments section

This was originally going to be posted in the comments section but it exceeded the 2000 character limit.

This was originally going to be posted in the comments section but it exceeded the 2000 character limit. Not wanting to cut it short i decided to put it in an article instead.

The thing that really bugs me lately is that ozzy uses the popularity of the TCW group to prove a point when in reality it proves nothing.

All it proves is that 103 (by the time this article is authorized it will probably be more) people prefer bad story telling, plot holes and continuity errors. People today are stupider then they were ten years ago, just look at whats popular on tv! Look at whats popular in music, look at whats popular in entertainment its all shit. All of the music of today is 1 word or phrase sang over and over again to snythisized music, everything that's on tv now is a reality show about some spoiled brat(s), every movie now a days is a remake, sequel, or book adaptation. as our technology advances we get dumber, this is the law of diminishing intellect.

We rely to much on technology to do things that years ago where done manually and i'm not just persecuting TCW fans i do it too! I admit i rely too much on my calculator, too much on my spell check and its making me stupider as well. Lets compare TCW to SW:CW for a second. SW:CW was drawn all by hand, the way cartoons are traditionally drawn. TCW on the other hand is done entirely with CGI. The problem with this is, that the graphics are so amazing and well done they feel its alright to let the story suffer and they know they will be fine because you can pretty much slap a SW logo on any piece of shit and people will worship it. They like to think that TCW is all deep and interesting when in reality all they're watching it for is for the pretty colors flashing at them on screen.

Am i saying they're stupid for liking this garbage? Kind of but i'm really saying that we're all stupid. No one knows what quality entertainment is anymore. I go on their group page from time to time and i see them shitting on the comics, books, and miniseries all the time. They need to learn to respect their predecessors because without them TCW wouldn't be on tv right now would it? So its not just TCW that's bringing Star Wars down the proverbial tubes but the entire entertainment industry. TCW isn't the attacker its the victim, all of you TCW fans are victims as well, they're exploiting our stupidity because like i said before, they know that they can slap a Star Wars logo on any piece of crap and you'll kiss it's feet. TCW could be so much better than it is but you wont be able to see that until you open your eyes.

There's my rant for today, to lighten the mood here's some funny images i made. 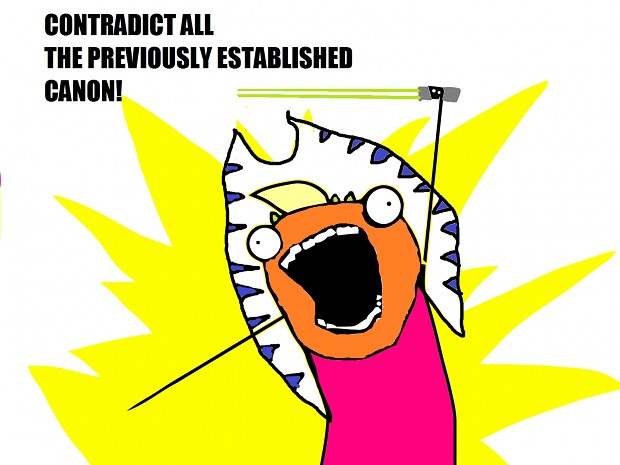 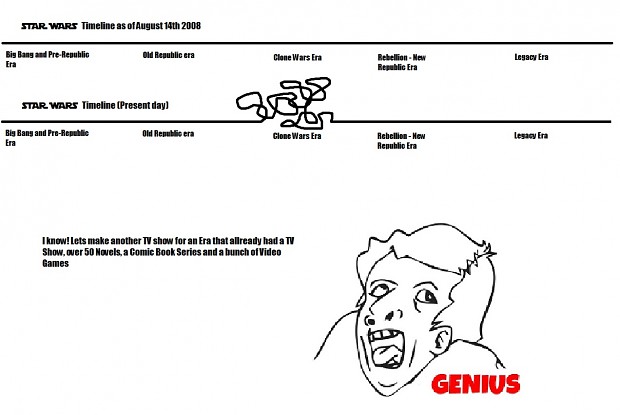 I agree, they remake every movies (Robocop is the next) and people are in love with commercial "music" and in love with their reality tv stars...

I don't understand why they remade the clone wars, they could have tried a serie on the imperial pacification or during the galactic civil war...

Your argument is good except for one small problem: it's not an argument. Had TCW been before SW:CW you'd be for the former and against the latter. What you and many others fail to understand is this: 1. Lucas has the last say when it comes to star wars (or did till he sold it, thank the stars) so if he wanted to change the established cannon so be it. 2. The books whilst cool aren't established cannon, they are not quite cannon not quite fannon, a limbo state between the two. Yeah I'll give you the bad writing in TCW but it was hardly better in SW:CW they're for kids what do you expect? TCW has however despite your many attempts to ignore it stayed pretty close to established cannon, with the Rep' Commandos for example. They kept what they liked from SW:CW too e.g. V-19 Torrent.

My point? Whilst I know you do this with the best intentions, your hatred for this show relies on just as much bias on your part as it does on TCW being poor in places.

never said it was an argument, its my thoughts and theories

ARG! Here we go again another article full of angry opinions that are not because TCW's story is bad but because its not the exact story that SOMEONE else wrote and delta read.
I will agree 110% about dumber people since I see them all the time at work and in public. People that would have been eaten by wolves or would starve to death back in days before mankind as a whole outsmarted natural selection and choose to bring the lazy, arrogant and stupid along for the ride but I have yet to hear delta provide an intelligent review of any of the story arcs. Everything has been either a seek and destroy mission for contradictions or a general rant like above calling the whole show crap. Week after week I see shows and behind the scenes video and read aticles that explain in depth why they choose to do many things in the show, explanations of the story line, what elements they choose to add to the show to acknowledge EU or the movies, what the story arc or episode is doing to connect Ep 2 to 3 and make that transition, etc. The studio has hundreds of hardcore Star Wars fans working for them and yet Delta seems to think that they know nothing of star wars and are too stupid to realize they contradicted something. A whole group of star wars writers meet with GL constantly and plan out each episode start to finish.
As usual you rip on a story that you know nothing about. If you seriously want to rip on the show you need to provide a more educated review of the exact storyline which you claim is so shallow. Some story arcs have been bad, some good, some great but certainly no one with an unbiased perspective can declare the whole show has horrible story telling but you would never be accused of an unbiased opinion.

As I said many many times. Most EU authors are warned ahead of time and were warned years before TCW that GL still may do stories in the era that will make theirs non canon. It is George Lucas' story. The same is about to happen with Ep 7 8 and 9. Can we expect more of the same attitude about those Delta?

7 8 and 9 will be g canon so no ill have no quarrels with the other movies. plus knowing jj Abrams they'll probably be epic

you people do realize it wasn't meant as an insult right? i said ALL of us were stupid, ALL of us were deceived. we ALL need to open our eyes and see the bigger picture. ALL of us. myself included