Hello! Today, we will talk about signs and feedbacks in T.I.M.E.S.. Indeed, our user interface and our stress factors are two important parts of our student prototype.

Hello! Today, we will talk about signs and feedbacks in T.I.M.E.S.. Indeed, our user interface and our stress factors are two important parts of our student prototype.

Stress Factors
During the pre-production, we focused a lot on the stress of our Japanese soldiers. Our stressline system was an interesting gameplay feature and also a useful development tool for our designers.

But we realized, secondly, something very essential: we didn't know how to communicate this game mechanic to the player. Little by little, signs and feedbacks became a significant part of our production effort. And after all, we decided to display all our stress factors directly on the UI. Here is what happens when the player activates some stress factors on a group of enemies. 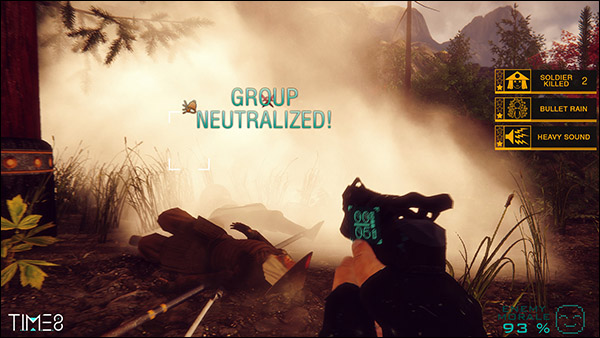 Yellow stress factors are a little bit stressful, orange ones are frightening and red ones are terrifying. It means that you should focus on red stress factors to quickly increase the fear of an enemy group.

Combos are highly rewarding and are the best way to win! You just have to activate as many stress factors as possible in a single action to neutralize the enemy group. Besides, it will save you a lot of ammunition for the next fights.

Enemy States
An enemy state icon above an hostile indicates what is his current reaction:

Some enemies will have specific reactions, not necessarily hostile ones:

All of this is fully systemic!

We hope you enjoyed this news about important signs and feedbacks in our prototype. Do not forget: T.I.M.E.S. will be released on Wednesday the 1st of October, 2014. Stay tuned, and see you soon!

I'll say this again, your game sounds like one of the most original, innovative and interesting productions of the last years, I really can't wait to play it.

Oh yeah! Don't forget this is just a student prototype.

I love the sound of this, though it sounds odd that taking out a general is the same as a regular officer.

And will enemy reactions vary a bit? Like soldiers will retreat but one might try to stay and rally the others?