The current geopolitical situation within the galaxy can best be described as tense yet hopeful. With the two major nations, the Galactic Alliance and Galactic Empire, at odds with each other yet neither willing to commit themselves to open warfare just yet. While both nations have their fair share of revanchists, the majority populations are wear of war. Though, the disposition of the masses is fickle and may change at a moment's notice. Internally, the situation for both nations is precarious. Chief of State Vancil of the Galactic Alliance has struggled to gather enough support for his programs of civil & military reconstruction, enemies gather on the frontiers of Alliance space. Fear that local conflicts might erupt into full-scale war divide the senate into coalitions; those who would safeguard the frontiers through military means versus those which would rely on Jedi intervention. Sadly, fear and misinformation have wracked the Jedi's reputation throughout the galaxy. Similarly, the Empire faces its own challenges; the sudden return of a large number of former Krayt loyalists resulted in growing animosity between units which previously faced off against each other during the war. To make matters worse the empress Marasiah Fel pardoned most of returning military and government officials citing the need to rebuild the nation, this did not sit right with many Fel loyalists. Marasiah re-established the moff council, consisting entirely of Fel loyalists furthering the rift between them and the former Krayt loyalists. Perhaps the greatest challenge the Empire faced was when the Empress was assassinated, throwing the Empire in disarray until Rena Fel ascended the throne. Publicly, the young empress is well received by the public, however the upper echelons speak of her with disdain due to a weak claim to the throne and Rena's strong desire to centralise power, having positioned herself as head of the moff council.

Following the battle of Coruscant at the end of the Imperial Civil War, the majority of the former Krayt Loyalists suddenly found themselves without the support of their Sith masters and promptly returned to the Fel Empire. It came as a slap to the face to the Alliance when the late Empress Marasiah Fel unofficially pardoned the treasonous elements of the Empire, instead directing her energy towards rebuilding a nation. However, not all those who fought for the One Sith returned to Bastion and many have since, for various reasons, sworn loyalty to new masters beginning a new era of warlordism.

In Hutt space, a new nation rises. Born from the atrocities of the Yuuzhang Vong War and the Imperial Civil War and united under a Supreme Mogu. The Hutts are a dormant superpower, their efforts focused on reconstruction and a large buildup of military assets. Relations between the Cartel and other governments is strained due to the unwillingness of either the Alliance or the Empire to admit to having previously received sizeable wartime contributions from the criminal underworld.

Meanwhile, the Hapes Consortium, previously a member of the Galactic Alliance before its disastrous war with the Empire, has chosen to return to a state of isolation. The Hapans were largely unaffected by the Imperial Civil War. In Mandalorian space, the new Mandalore is more interested in chasing rumours and rebuilding the depleted ranks of Mandalorians following the disaster at battle of Botajef. For the foreseeable future, the galaxy will have to make due without the assistance of Mandalorian mercenaries. Disturbing societal changes are occuring among the Yuuzhang Vong, the widely hated species is seemingly being organised under the leadership of a new Warmaster with the ideal of strength in unity established firmly. So far, there have been no glaring acts of aggression and yet the galaxy dreads the prospect of a second Yuuzhang Vong War. Finally, the Chiss Ascendancy, as it has during the vast majority of its existence, has returned to a state of near total isolation stating that disturbing events are unfolding within the Unknown Regions.

Not all factions are created equal. While the main page of the Roleplay Hub will always display the major galactic powers, there may be numerous other smaller factions vying for their place in the galaxy.

These minor factions will be listed (in no particular order) below, alongside a link to their military page. If applicable, a link to their Mod DB group will also be provided.

All currently controlled sectors colour-coded according to main faction owners. 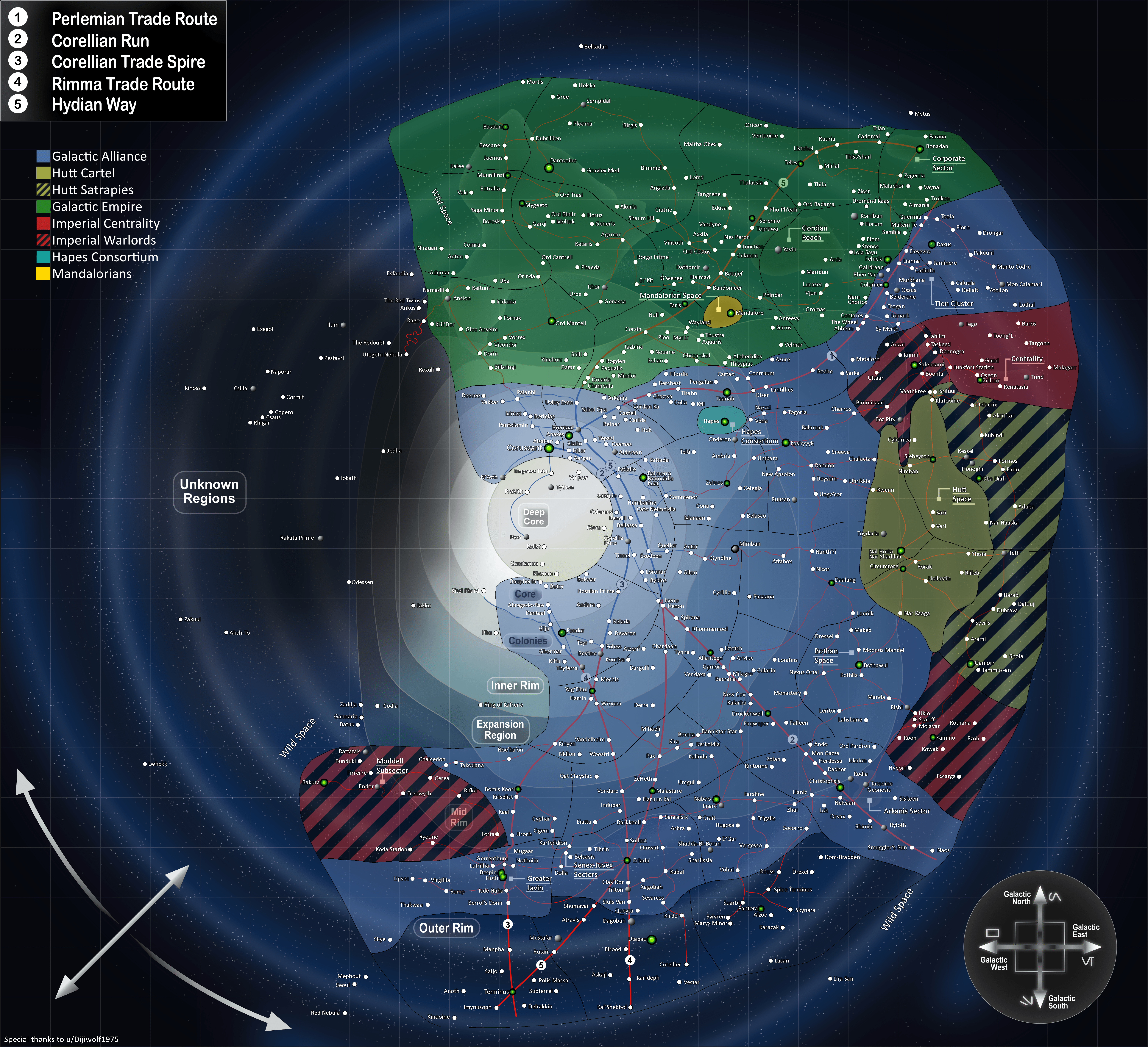