Read on for what's new in our eleventh monthly alpha release. 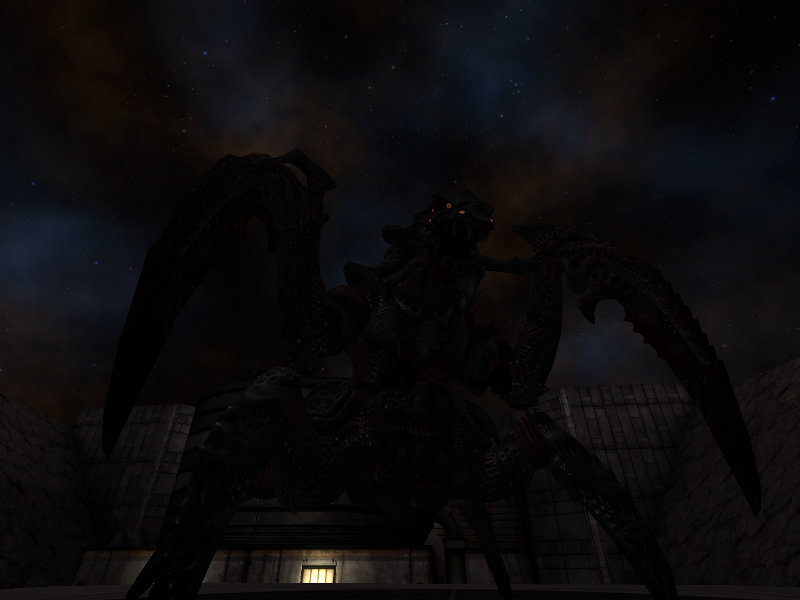 The map has been completely redone from scratch, and while it maintains a similar layout, the appearance is much more refined. For instance, the lighting is better, and the outside area is brand new, featuring a high-resolution space skybox. The textures are all properly aligned as well, providing a smoother appearance. Over successive releases, the cliffs and the structure outside will receive further detail, but for the time being, the map is fully playable and pleasantly overhauled.

Based on feedback, Yocto and Parpax have received updates to their layouts. For instance, Yocto now has ladders in the formerly inescapable gill room, and Parpax has received some alterations to its rooms and corridors. This will be the tentative final beta for Yocto, assuming that no further changes need to be made, as work will begin soon on another map. As for Parpax, its textures will begin to be normal mapped shortly.

We've had bloom in the engine for a while, but it didn't look the way we wanted it to. For this release, we've fixed it, and we've also provided a menu option and the appropriate shaders in the asset pack. If you're running the GL3 renderer, try it out! It works with any light source, and will take on its color when appropriate. It looks particularly nice with the marauder zap and the flamethrower, as well as other flashy human weapons.

Our bot behavior has been refined, and your favorite computer-based friends should now be much less awkward when dealing with map geometry. For instance, small gaps will no longer prevent them from movement. Navmeshes for the bots are generated much faster than before, too!

Shaders will be generated faster than before, as there are fewer of them to be generated in the first place – they have been optimized by removing two unused macros. This should shorten the wait for those on older hardware, and should make it relatively painless to recompile shaders on a whim when testing things or switching between graphics options.

You will no longer need Speex to build the server when compiling from source, and WebP is now internal, which should make things easier for those that do not have the proper version in their repositories. We're now on GLEW 1.9, and unnecessary GLEW files have been removed.

New translations!
Entirely by accident, German was not included in the prior release, but it is there now and should be functional. In addition, we now have French! This means that you can now play Unvanquished in English, French, German, Polish, and Ukrainian.

Ubuntu packages!
PlayDeb has been down for a while now, but there's no need to worry! We now have packages built for Ubuntu 12.04 and 12.10, and we will continue providing these packages in the future. They should work just fine in derivatives such as Linux Mint, too. Instructions for adding the repository may befound here.