Hello everyone, I'm happy to hereby unveil a new Mod, Tiberium Refined to the public. But first, please allow me to apologise for the discontinuation of Alternate Warfare, my previous Cold War-era Total conversion. A project on that scale requires a large amount of time and energy invested in creating art assets for it, which is sadly something I can no longer personally afford to do, since I had to do all these by myself. So it is with a heavy heart that I must now halt the development of Alternate Warfare indefinitely.

Which brings us to the focus of Tiberium Refined: a deep dive into the coding aspect of Tiberium Wars for the purpose of uncovering its full potential in order to improve the gameplay, as well as fixing the many flaws present in the vanilla game, adjusting aspects of the game which conflict with the setting, and also further differentiating the Scrin from the human factions in order to make them more alien.

So without further ado, allow me to introduce to you the new changes brought forth in version 0.1 of Tiberium Refined:

All engineer units gain the ability to uncover capturable neutral tech structures on the map, and will be able to issue capture command through the fog of war, instead of having to click on the general area around the structure and issue command to the unit a second time once they get there. Engineers can now also slowly repair any garrisonable neutral structures they occupy.

Human infantry killed by Tiberium radiation now have a chance to respawn as a Visceroid as well. Visceroids can also turn human infantry into Visceroid by killing them. Damage and HP increased for Visceroids, but they now take increased damage from Sniper fire. May introduce more functionalities in future updates such like allowing multiple Visceroids to combine and form one giant Visceroid.

Stealth detection overhaul. Regular infantry can no longer detect stealth air units, only anti-air units and turrets can. Landmines can only be detected by engineer units. 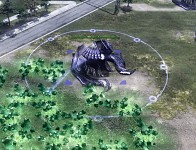 Reactors can now provide additional power by taking control of a nearby Tiberium crystal. Naturally, blue Tiberium crystals would produce more power than the green ones.

The Buzzer Hive can can also provide experience for the Stasis Chamber (and also benefit from its upgrades) with the Buzzers it spawns, but at a reduced rate of 50%.

The Nerve Center can now upgrade the Portal (Scrin Barracks) to enable it to replenish losses for nearby Scrin infantry units.

Buzzers no longer gain promotion individually, instead they transfer all experience earned back to the Stasis Chamber to level up the structure itself, which can then in turn be ordered to promote all Buzzers. The attack and defense bonuses gained on promotion for Buzzers have been reduced, but they now receive increased movement speed when promoted. Reduced Buzzer damage to heavy infantry.

Disintegrators will gain small amounts of cash when attacking structures. slightly increased cost and HP. can no longer detect stealth. Enemy vehicles will now take more damage when they run over Disintegrators, as well as suffering reduced speed for a short period.

Added the Emergency Shield Reboot to Annihilator Tripods, Devastator Warships and Planetary Assault Carriers, allowing players to manually recover Forceshields on these units. Initial Armor Points for Forceshields have been reduced by 20%, natural recovery time decreased from 120 seconds to 90 seconds.

The Armory can now replenish losses for infantry squads within a certain radius. 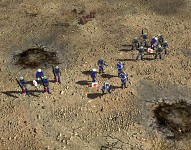 The Armory will now allow all Rifleman Squads, Missle Squads and Grenadier Squads to upgrade themselves with a Medic unit, providing constant healing and increases their resistance to suppression. TIP: The Medic's healing range is larger than the size of the squad, and the effect doesn't stack, so it is a viable strategy to upgrade only one squad and have it provide healing to all nearby allies.

Increased Missile Squad members to 3 and adjusted individual stats accordingly. Infantry missiles now have a change to miss targets that are too far out, this penalty is removed once the unit is promoted to Elite. Reduced damage to heavy aircraft.

The Confessor upgrade will now allow Militant Squads and Militant Rocket Squad to replenish losses when they are outside of combat. Upgrade cost increased to $1500.

Increased Militant Rocket Squad members to 4 and adjusted individual stats accordingly. Reduced tracking for infantry rockets, and rockets now have a change to miss targets that are too far out, this penalty is removed once the unit is promoted to Elite. Reduced damage to heavy aircraft. 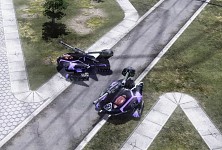 Scorpion Tanks now retains its main cannon after researching the Spitfire Laser Capacitors upgrade. Overall damage of the added laser cannon have been reduced, but damage to infantry have been increased.

The Signature Generator ability for Venoms can now create several mirror images of itself and increases its defense by 25%, this effect lasts for 5 seconds. Upgrade cost for Signature Generators increased to 800. KNOWN ISSUE: For some reason this ability wouldn't function the same way as the Decoy Army support power, where decoys created by the latter would appear overexposed and pale to differentiate themselves from the host.

---
And that's all for now, try and enjoy. If you are yearning for more new stuff, please follow the mod page! Any and all feedbacks/suggestions are also welcomed!