The newest update to Through adds an Alchemy system and a new level up system.

The focus of the newest version was on addressing balance issues. I wanted strength and intelligence focused heroes to feel more distinct at high levels, and to generally make intelligence heroes stronger overall. 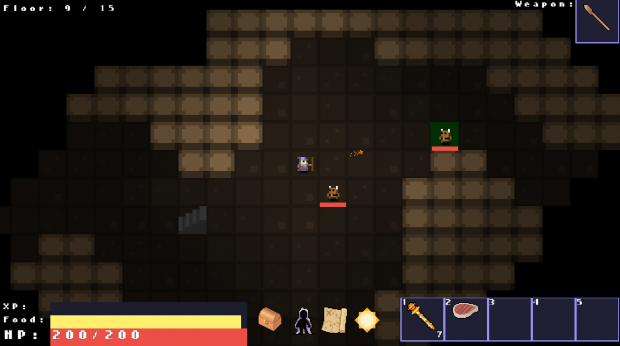 The new alchemy system allows players to combine two items to produce a new random item. You can access it from the inventory screen. However, the player needs alchemy points to use the alchemy system which he gains by leveling up his intelligence stat. This allows intelligence focused heroes to recycle old wands into newly charged ones and get rid of useless items to make way for more useful ones. I haven't added an explanation to the tutorial on how Alchemy works yet, so please tell me if you find it confusing and if so what about it is confusing so I can attempt to address this in future patches.

The new level-up system focuses characters more than the previous system did. Whereas you used to gain a point in all stats every level, you now get 3 stat points to allocate as you see fit. This is slightly more restricting then the previous system (leveling up all stats once and then leveling one up a second time would take 4 stat points), but serves to focus characters stats more towards their chosen role. For instance, strength based characters may level up HP and Str, whereas int focused characters will probably focus more on Int and a little bit of Str and HP. A Jack of All Trades type can level up all three. With the addition of the alchemy system, I believe all paths are valid.

For future patches, I would like to add items that are only accessible through alchemy. The next patch will probably focus primarily on increasing the character creation options. And following that, I'm hoping to substantially increase the number of enemies and items. Post in the comments section or email me at willswannack@gmail.com for any questions or bug reports.

While playing this game I distributed heavy whipping cream into my cloth bindings on numerous occasion. A+++++++. Would play again.

Though, I've got to say I really hate the art resolution mix-up.
Everything looks so purty, and then, suddenly: HUD is fugly.

The art resolution is consistent between items and characters now, that screenshot is old. The only video is really outdated as well. The lack of screenshot/video updates is due to my stupidity and laziness, as well as lack of time. Hopefully I'll get some up to date screenshots up soon to use for future news items.

Unless you mean the actual buttons have a different resolution (like the map and character button). I hadn't really thought of that as an issue, but I guess if it's bothering people I can look into changing them.