Throne of Pendragon. Rome TW realization of my universe. This is the article about one my project for old good Rome1 TW game.

I think, all knows now, that i have full realization of my universe, not only in the Warcraft III or Zero Hour engines, but also in Rome TW engine. I have a project with name - Throne of Pendragon. 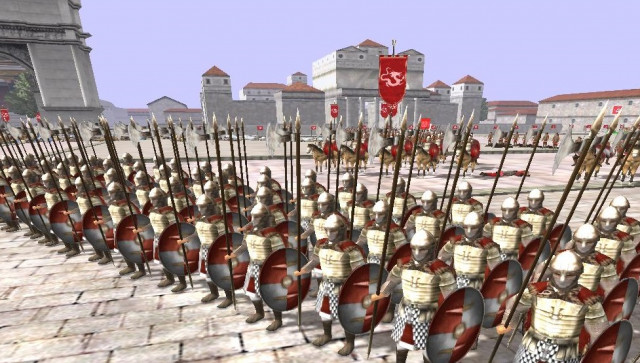 You can find the topic here.

and some information about the Mod background.

481 - 485 AD
Arthur Pendragon becomes Roman Emperor through the power of the Holy Grail. He founds his own empire and soon removed the concept of "Rome" from it. The Knights of the Round Table become his loyal generals, and some even provincial governors. Merlin is rightfully the supreme chancellor. However, everything changes, thanks to the machinations of Lord Mordred, the governor of the East, who is rumored to be Arthur's illegitimate son. Some believe that he was not a son for the king, and the ruler only adopted a boy, picked up on the street. At first, Mordred tries to come to terms with the lords about the overthrow of Pendragon. Some of the nobles condemn the aspirations of the governor of the East to seize power. Others feel empathy. However, a whole league of nobles soon formed, which would not mind taking advantage of the situation in the Pendragon Empire and splitting the country into several parts. In the same year, a meteorite falls in the region of Western Anatolia, which immediately interests Mordred. The Governor rushes to the crash site with loyal troops, and soon discovers there a strange artifact known as the Splinter. Mordred takes the relic from the meteorite for himself, and orders to bury the place of the fall. For unknown reasons, a rapid change in personality begins in the Knight of the Round Table. His strange behavior repels even the conspiratorial lords. The only exception is Lord Andarin, who studies the artifact together with his ruler. In 485, Mordred announces the separation of the East from Arthur's empire. Lord Finian, commander of the troops in Europe, immediately organized his own league and also separated from the country. Then there are branches of the governorships of the North-East and other eastern territories. Rebel lords such as Malagant, Finian, Guilden, Belén, and Vindex revolt against King Arthur. Thus, new states are formed. Mordred remains to rule in the East in Constantinople. The Fragment's power greatly increases its power. The Great War for the Throne of Pendragon begins.

Year 486-489 AD
The Great War for the Throne of Pendragon is underway with varying degrees of success. Arthur's troops, led by Lancelot, gain the upper hand both in Britain and in all the borderlands. Lancelot utterly crushes Finian's troops in Eastern Europe, and then eliminates the resistance of Lord Vindex. Sir Dagonet organizes an operation to destroy Malagant's troops in Romania and Bessarabia. Mordred plans to strike at southern Italy, where Arthur is entrenched along with Merlin. However, Merlin sends a powerful psi-storm to Mordred's flotilla. A monstrous storm destroys up to 300 enemy ships. Mordred calls off the operation and continues to fight in his territories. The Grail Knights' cavalry, along with Lancelot, inflicts three defeats on the troops of Mordred in Greece. Fights have been going on for more than 4 years throughout Europe, Asia Minor and North Africa. Arthur is getting closer and closer to the domain of his former Knight of the Round Table. However, fortune soon intercepts for Mordred. He successfully defeats Guilden's army and weeds out Malagant from Macedonia. The Fragment's power gives Mordred an incredible amount of energy. The black knight personally participates in battles and slays thousands of enemies. His sword glows with a mysterious blue flame that makes even allied forces tremble. Three months later. he conquers all of Greece and defeats Lancelot. Mordred then defeats Gawain's army in Bessarabia. The Black Knight again forms a large flotilla to capture the Holy Grail. He knows that he lies not far from Rome in one of Arthur's residences. With the help of the Fragment, Mordred opens a portal from Bessarabia right into the heart of Northern Italy - to the Eternal City of Rome. He orders the flotilla to block all ports of Arthur's Empire. Soon Mordred appears at the walls of Rome with a hundred thousand army. Arthur rushes towards him along with Merlin and the faithful knights. In the decisive battle, Arthur kills Mordred. But he wounds him with a sharpened piece of Debris. Thus, two great rulers are killed in battle. The Arturians win the battle, but are left without their master. The body of King Arthur is taken by the druids of Merlin and taken to the mysterious land of Avalon. The Great War for the Throne of Pendragon ends.

Year 490 AD.
Merlin's research revealed that the Splinter was a mysterious relic created by unknown beings. He read only one single word on it, which for some reason remained on it. The word resembled the name of an unfamiliar creature and sounded like Lodegrance. Soon, Merlin completely destroyed the Fragment along with the loyal druids. They performed a whole magical ritual at Stonehenge and put an end to the mysterious miasma emanating from the piece of meteorite forever.
Further information about Merlin and the Knights of the Round Table has been lost.