A maze, a ball and some vomit. Who wants to join? Hurlbags not included.

I've always wanted to do something awesome in the Blender Game Engine. As for now, I still have to achieve that goal.

Bicobee is a simple concept with certainly confusing gameplay:
You are the blue ball (okay, that is easy...) moving through an obstacle course (yeah, that sounds very original) whilst spinning and rotating and whatever synonyms for it you may find (wait, what?)
Not only the ball itself spins - so does the camera. Your movements are relative to the view and your view follows the ball, in location and rotation. So if the ball is tilted to the right, the left arrow key makes you go up. Due to the lack of friction, the ball does not stop spinning on it's own either and in many places there is no platform or similar that would allow you to slow the spin.

So, aside from the simplicity of the concept, it requires some strategy: Smash through the crates at the wrong speed and be thrown into a violent spin, rendering you unable to navigate. Be too slow about it and gravity may end your move. Of course, crates are only the first of a variety of obstacles, ranging from rotating platforms to wall-mounted turrets. 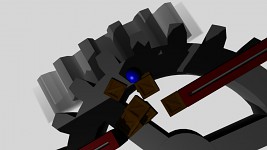 Up isn't actually up here. It's down-left-ish. The red beam is in fact vertical.

Ha that sounds funny. Took a couple of seconds to understand the concept but this could be interesting :) I guess it could make me sick as well.. :P By the way, if this is going to be published, will it be free? Or is it possible to sell games made with BGE?

License-wise it would be no problem to sell a BGE game. It's open source, after all.
I don't think I would do that, though. Would be kind of a **** move, I guess.