Lots more lore covering what the Forgotten West is, who the Light and Darkness is, Golems and Ochre Stones. More concept art too!

Posted by StephenGibson on Oct 3rd, 2014


The clouds clear momentarily, the blazing sun piercing through to your sensitive eyes. As you wince in pain, Bo offers his tattered hat as solace from the light.


“Eh, Don’t mention it...as I’ll be taking it back right quick when the sun hits the hay”.


“Guessin’ you’ve realized you don’t ‘member much. It’s not uncommon fer folks to have an awful bout of amnesia after bein’ sired. All that tinkering with yer brain meats is bound to cause a few problems up in there”.


Origin of the Forgotten West


See, he was one of the Architect’s “Golems”. Legend has it that Icarus tried to save humanity from a...sort uh family feud, I ‘spose you could call it, among the “Light”. Unrestricted by organic flesh or the weakness of a spirit body, such as the Light had, Icarus possessed greater power than either side of the feuding parties. I mean, this is the Light we’re talkin’ bout here! So it’s sayin’ somethin’ that not even those folks could destroy him.


Anywho, either side alone wasn't able to defeat him, as I was sayin’, so they joined together and cast a spell to imprison him here. Feel bad for the guy...sentenced to an eternity in this dusty wasteland.


It’s a mystery that he ain’t escaped yet. Some mighty powerful hoodoo at work if you ask me! Know what? I don’t think Icarus minds the dust. I'm sure if he did, he’d terraform the whole damn place into a fine paradise. Lucky us though…


Current state of the Forgotten West


The Forgotten West happened ages ago, before the old worlder's were runnin' amuck the Americas. Before the natives sent up their little huts, before the buffalo roamed, before...get what I’m gettin’ at?? It’s old!


It’s awfully full’a ghost towns. Rumors say the Iron Witch did all kinds of experiments on the populace once it was established. Gives me shivers jus' passin through some parts, ain’t right the kind’a things yer peepers see.


No mass ghost-town-making experiments lately though. Just the usual. Criminals from all around sent here so high-minded lawmen need not git their conscience dirty or hands bloodied. Just exile ‘em here!


As you can guess, ladies and gents in these parts are low-lifes. Dirty scoundrels, supernatural riff raff. Yer general undesirables. Hey, I ain’t judgin! Ol’ Bo rubs shoulders with the lowest, heh heh.


Probably best you don’t remember much, wouldn't want that past of yer’s gettin’ ya down. Ain't that something? The Forgotten West givin’ the unredeemable a chance at redemption. Hoo hoo, what a thing!


Though, you’ll soon find out most folks don’t give a damn 'bout redemption. This here's the devil’s playground.


Inhabitants of the Forgotten West


Like I said, you got all manner of dirty deeders. Vampires, Witches, Werewolves, Ghosts, Ghouls, Demons, so on, so forth, et cetera...Generally people tend to stick to their own kind, but alliances have been known to form. At the very least, an agreement of peace.


Most of the tent cities and towns are gangs that have gone'n banded together fer survival. The “Valley” is where we’re currently squattin’. A decent establishment located below the Temple.


If folks can contain their persuasion to pernicious past times, they can etch out a decent life here. The Iron Witch and his coven’s presence is pretty common in the Valley, so folks don’t get too rowdy.


Magic keeps crops growin’ 'n food flowin’ year round, so a good many come and go from the Valley. Best get cozy!


As I understand it, they’re a host of extraterrestrial bein’s that watch over the affairs'a men, at times intervenin' on their behalf for the exaltation of the species. Scribbles on scrolls suggest the Light favors “righteous” and morally correct behavior...whatever the hell that is! Heh heh, anyway, they apparently act down right righteous themselves, though I heard some deviations have occurred throughout time.


Far as I know, they don’t vocally associate themselves with what some call the “Creator Of All Things”, though most assume their connected. 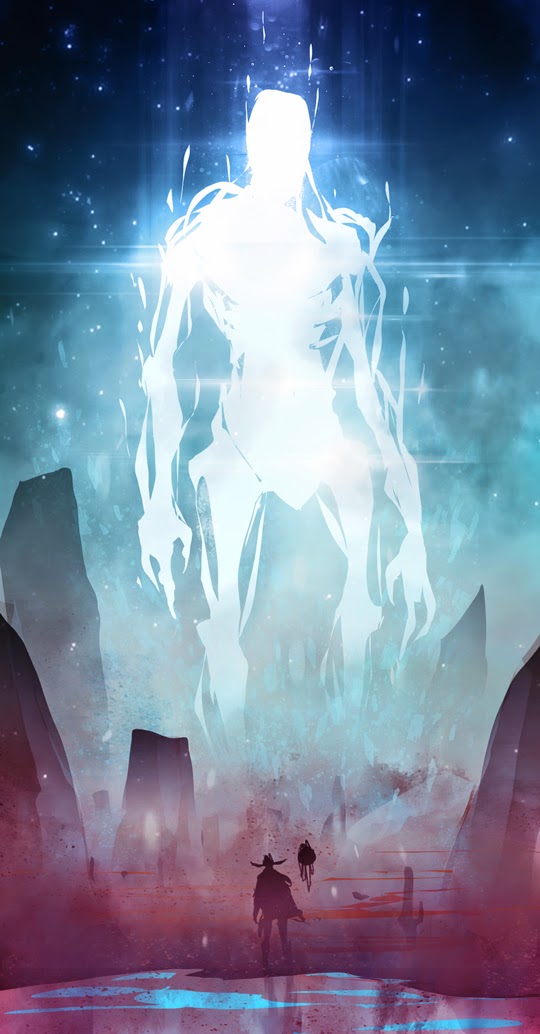 
Oh the Darkness, their my favorite, heh heh. Nah just jokin’, they’re a menace to mankind in the worst way.


As I said earlier, a division occurred within the Light. One side wanted to force mankind into becoming a more exalted and evolved species, the other wanted mankind to find it’s own exaltation and help it do so in less direct ways.


Well, a war began up there in the Heavens, and those who we now lovingly refer to as the Light were the victors. They cast out all those who disagreed to the depths of the earth and they became the Darkness. Oooo, spooky! Heh Heh.


Huh? Oh well, yeah, the Darkness has been corruptin’ man ever since, your’s truly as proof! Not only that, but the pure ways of thaumaturgy and, of course, anything to devolve mankind, as an open opposition to the Light’s desires.


Golems, Golems Golems. Uh, I think I heard one time when I was peepin’ in on a lecture the Iron Witch was givin’ to his coven, that most living creatures began as Golems.


A Golem's basically an organic or mechanical thing brought to life through magic and at times, granted a soul. Mankind itself started out as one of these Golems, and as you now know, The Iron Witch as well. I’m guessin he’s got a beautiful little soul himself locked up somewhere in all that machinery.


The Iron Witch considers mankind one of the greatest Golems, what with the ability to think and procreate all bundled up in one lump of clay. Must say, I am right grateful for one of those things!


Oh yeah, ‘spose I did mention one of those Ochre stones. Well, they’re said to be a tool of both the Light and the Darkness to grant supernatural abilities. I figured it was nothin’ more than a myth until the Iron Witch started sirin’ new witches with one.


Can't promise when the next lore drop will be but, here's what it will contain: