The Whip is the structure that the Commander will want to build when employing a more offensive strategy.

Continuing with our Alien structure updates, here is a quick look at the "Whip". This is a new upgrade structure that really has no counterpart from NS1. Here's the concept: 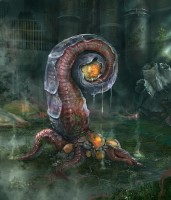 The Whip is the structure that the Commander will want to build when employing a more offensive strategy. It provides Commander-researched, player-purchased upgrades which increase the amount of damage aliens can inflict upon marine players. Currently it allows Melee 1/2/3 upgrades, a Lerk upgrade called Piercing (makes sniping deadlier, adds a satisfying "crack" when firing and pins targets to the wall on death) and a Bloodthirst upgrade for Skulks (details murky, any ideas?).

As discussed previously in our Crag reveal update, each of the alien structures has a "passive" ability, "triggerable" ability, and "targeted" ability. The passive ability for the Whip is a melee attack which automatically strikes nearby enemies. Lashing out with its main tentacle body, it whips marines who happen to be within its sweeping arc, and it can do damage to more then one target at a time. When its triggerable ability is activated by the Commander, alien players and structures nearby squeal in unison and are given a short term damage boost (similar to the Lerk's Primal Scream from NS1).

For its final ability the Whip can be upgraded to a "Mature" Whip, which adds a bombard-style attack. The structure forms and grows glowing balls of acidic goo, that it coils its tentacle body tightly around, until given a command to hurl its deadly projectile at Commander selected targets. The acid ball explodes on impact and has a splash damage area effect. All the abilities use energy which replenishes over time. In addition to new abilities, mature versions of alien upgrade structures have a higher maximum energy and more health.

Here’s a render of the final model in its default pose: 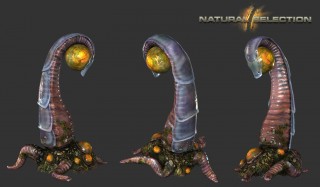 One other feature worth mentioning is that the commander can relocate the Whip structure, though slowly, after it has been built. It uproots and drags itself around by its supporting base tentacles, a useful feature for being able to strategically place the Whip in ideal positions from which to attack. This should also be useful to keep the marines on their toes and even sneaking them into an offensive position. Of course they will be completely vulnerable while moving, so they'll need to be protected by aliens on the ground.

We hope you’ve enjoyed this first look at the Whip...stay tuned for more sneak peeks of the new alien structures!

Talk about it in the community forum!

Hm, reminiscent of the new zerg spine crawlers, but it has more than enough originality to hold its own in my opinion, especially with that ranged AoE attack. Can't wait to put a few in my employ, or crosshairs, depending on faction, of course.

Eyes are for the weak :)

Whoa, that guy looks fantastic! Can't wait to get my hands on this game, already lost the pre-order that I wanted ;(

for the bloodthirst for skulks you could make it so that you can see players with low health through walls, which will be represented by a drop of blood. You should also be able to leech the life out of them when you bite them (i.e, for every 3 damage done,2 health is restored.)

If I were walking by that as a marine the first thing I'd say "it looks like ****" but not in quality, it's a beautiful looking piece of **** really high quality stuff, I wouldn't know what else to say before it whips my head off and scares the **** out of the marine next to me and making him run like a little girl.

What's the rate of fire on those acid ballz of doom?

The concept art is better than the model.

The whip is wider and better able to hold that ball of acid in the concept.