The Weaponographist has a new free content patch with a "Survival" dungeon mode and "Jinxes" that provide new ways to play. Upon release of this DLC, Puuba and Mastertronic also announced a new Doug McGrave cartoon short by video artist DuDul. 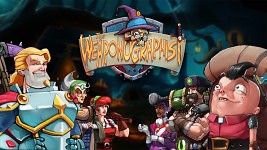 Puuba and Mastertronic have released a free content patch for The Weaponographist. The "Survivalation" DLC features the addition of Survival Mode, an endless dungeon that becomes progressively more difficult the farther the player gets. The Weaponographist - Survivalation also introduces new gameplay mechanics in the form of "Jinxes", which are alterations to the curse on Doug McGrave, unlocked by finding pages of the Witch's Grimoire during Survival Mode. Survival Mode can now be unlocked by defeating the game on normal difficulty.

Coinciding with the release of The Weaponographist - Survivalation, there is also a new Doug McGrave animated short, by video artist DuDul.