Post news RSS The votes are in... we have a winner

May news update for Exterminatus, Warhammer 40,000 themed mod for Half-Life 2. The next beta of EX is not yet ready, however I thought I should post to announce the result of poll I mentioned in the previous news. We put to the vote the choice of what feature should be added to EX next. The result with 40% of the vote and a clear majority is "Terminators & Genestealers".

The lure of tactical dreadnought armor and an extra early game option of the tyranids won though with the EX forum members, beating "Ammo dumps & Bio-mods" into a distant second. Although enthusiastic team members have leapt in making a start on player models for the new classes we still have a lot of work to do to get them in-game. 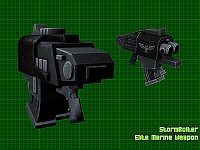 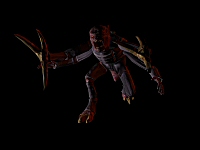 40k rules lawyers have politely pointed out the EX veteran's inferno pistol clashes with the warhammer universe. To correct this ChromeAngel is working on replacing the Inferno pistol with a more conventional Plasma pistol, using a model we received in trade from the Renegade 40k mod. He's hoping to i include this new weapon in the next beta. 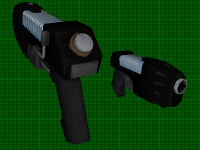 One of the EX community regulars Nic2 is looking at the AI code to get Tyranid brood creatures working in EX. A complex feature we had originaly planned for EX that had been shelved in order to deliver the public beta we have. EX community members "Dark Marine" and "Cowz with gunz" have also been busy working on their own maps for EX. I look forward to seeing the battle front of the war between the imperium and the tyranid fleet expanded with more maps.

can't wait for the terminators :D
good luck with it :)

Nice update, I still think we shuold of had healers! Loving the Terminator model, and nice to see you are using the Renegade 40k plasma pistol!

so wait, will this be human controlled terminators fighting bot controlled genestealers then?

No archkyrie, the new classes will be in addition to the classes in the game mode that is currently being Beta tested. This does put us in rather nice position to do the game mode you suggested too later on ;)

maybe i need to redownload hl

Oh, so this is your excuse for not putting in something as simple as a health charger or ammo box? Good job being lazy.

oh yes cos its sooo much easyer to model, animate and code 2 new player classes than add that.

It is still a stupid excuse to not put in something as important and simple as health chargers and ammo boxes.

Don't whine around just because it wasn't your option that won... .

i came. not really ;) but im excited to see this mod is not dead. :D
keep up the fantastic work guys <3

Please tell me we get claustrophobic hallways and power fists

Else its just not Space Hulk

This WILL be Space Hulk!
Great job Typh and Chrome!