The various units forming the main part of the rebellion against the Empire.

I have chosen to use the faction "Varden" to represent all humans fighting against Galbatorix. This means that the Varden only have human units (except the Nighthawks): no Dwarf or Urgal can be normally recruited. This said, three human "countries" fight Galbatorix: the Varden, Surda and the Wandering Tribes. I have tried to recreate the evolution of the human rebellion throgh the tpe of units from each faction:

=>the Varden themselves are the basis of the army with basic infantry (soldiers, archers and spearmen) that can be recruited from the Varden training Camp: 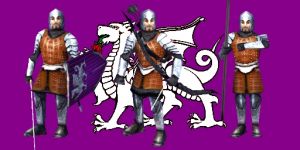 
In the Varden Training Camp can also be recruited the Nighthawks, the Varden Mini-hero. 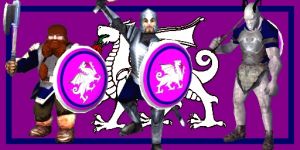 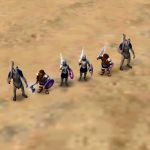 Dwarf, Human and Kull NightHawks and the whole horde.


The last type of unit belonging to the Varden is the Du Vrangr Gata member, the magic user of the faction.

=>Surda controls all cavalry units of the faction with riders and horse archers. 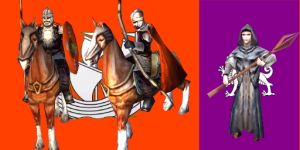 
=>The Wandering Tribes control all elite unites of the faction, representing their late arrival. 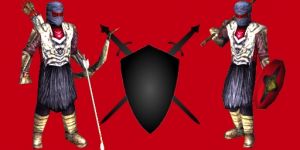 
All those units are finished and coded ingame except the Du vrangr Gata member as I don't know what powers to give him. So if you have any ideas, please suggest.

You can give him some simple magic offensive powers, hmmm, AFAIK, they read the minds of others in-book? Maybe they should have some kind of reveal powers, or even mind-control.

that can be done, the sorcers turn enemy units against each other in ROTWK :P

I was thinking of giving them some form of healing power to blance it with the other factions. A mind-control power seems to powerful but a mind confusing power (make allies fight each other) could be interesting.

For ALL spellcasters: My idea would be 2 auras. one damaging one that negates enemy damage. so if a spellcaster nears enemies it damages them. but if an enemy spellcaster is near nothing happens. if the casters get close enough their auras deal damage until one dies. just a thought. It would be like in the books with mages being a neccessity.