Post news RSS The time of the release is NOW!

The long anticipated release of Unification is finally here!

Greetings everyone and welcome to the long anticipated release of the mod! 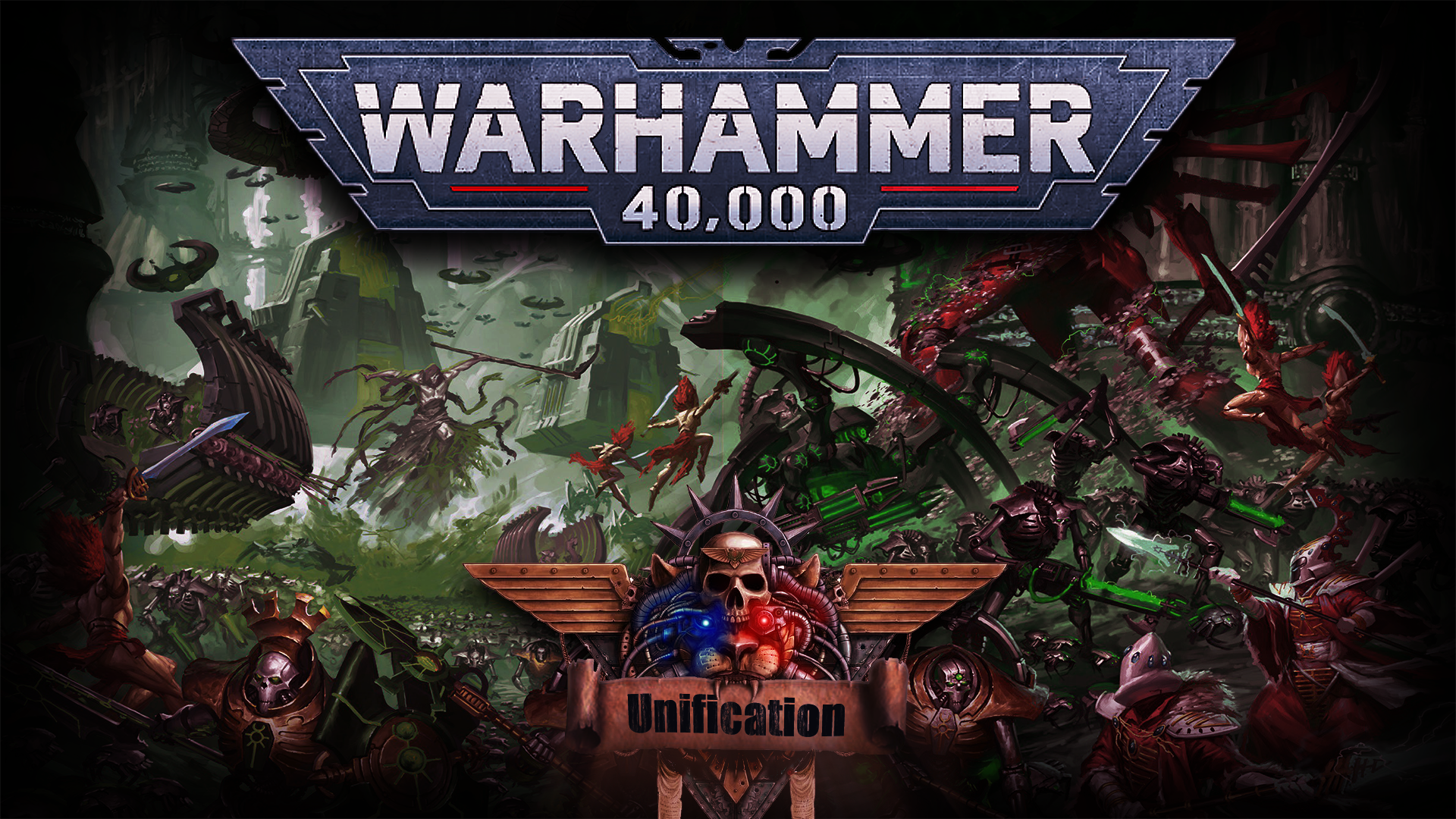 To get quickly on the juicy part,the release itself.
We have three ways of downloading the mod.Each has easy-to-follow and detailed instructions on how install.

- Main Modb release.
Due to the 8gb cap per file,we had to split the archive in two parts.The Core files and the race mod SGAs.The exe is also uploaded separately as we acknowledge we have people who may play the game from Mac or Linux OS(or just do not like exe),so a manual installation is just as easy and viable.
However,the installer also acts as an uninstaller of any old version of Unification and the Race Mods.

- MEGA release.
We have an alternative mirror to the main Modb release for the people who prefer a single link approach.As like above,the exe installer too is uploaded separately.Please note,the MEGA installer is different to the Modb and Google Drive versions,so please do not confuse them!!!!

Installer and MEGA link in the description.

-Google Drive release.
A fully automated installer that connects directly to Google Drive to download the files.Different than the other versions,so do not confuse them!

Google Drive Installer(manual download links for the core and the race mods package in the description).

- Torrent release.
Self explanatory,really.The more seeds there are,the faster the download will be!

And if one mirror/approach does not work for you,please try an another one.In the end,all approaches give the same result.
(For the record,we recommend the Free,Open-Source 7zip for extracting archives.) 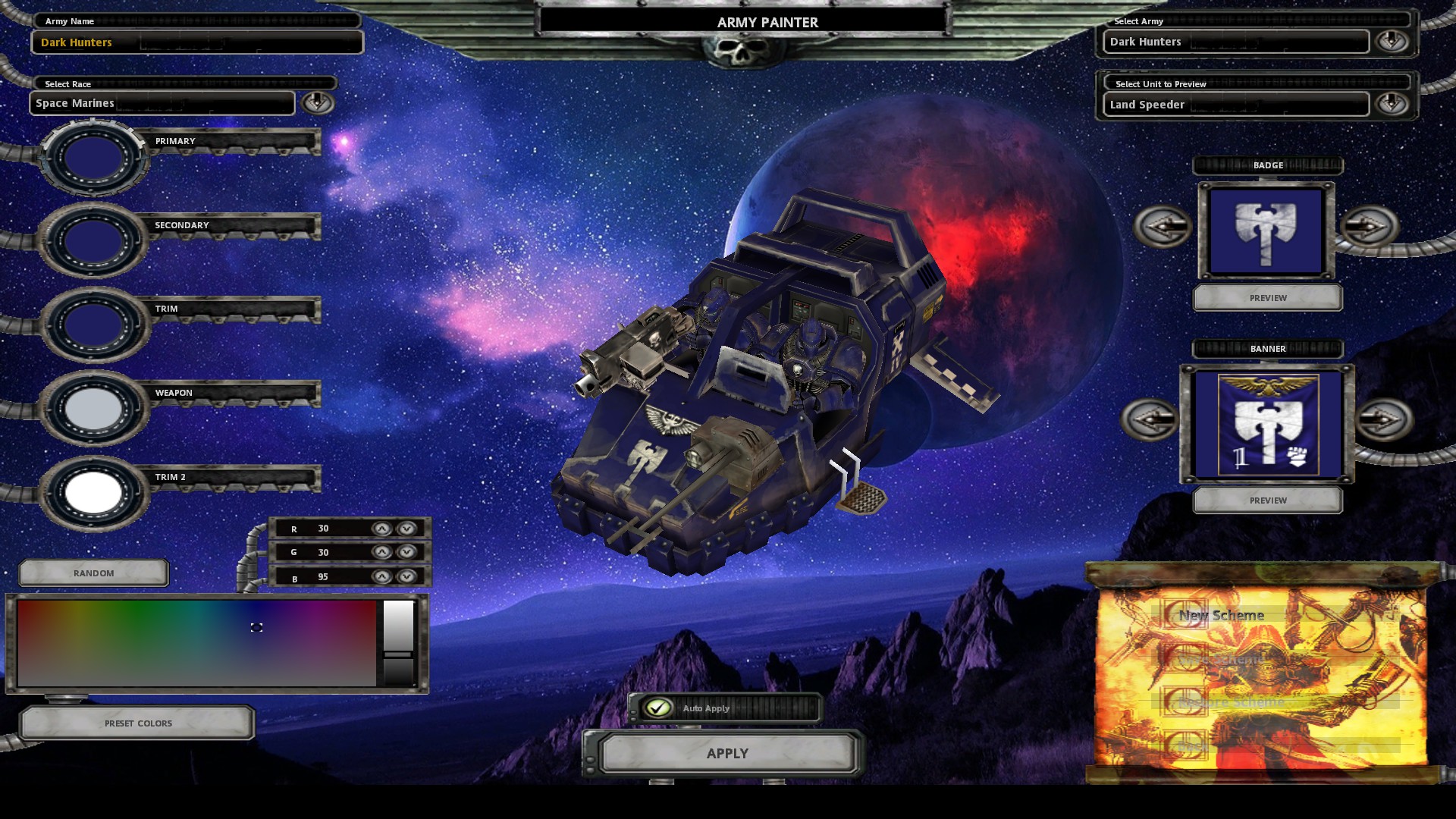 Modularity
One of the main perks of the mod is its high modularity.And this version,is no different.
However,since we have the main mods SGA'd inside the Unification_Bugfix directory for faster loading and compression,there is a small change in how to disable these if needed

Unification comes with two module files.Unification_Bugfix and Unification_Bugfix_New_Races.
The first just loads the core mod with the vanilla updates while the later alongside the new races.
However,if you wish to remove one of the pre-packaged race mods for whatever reason,it is easy.

Essentially,you delete the line of the race you wish removed and re-enumerate accordingly.Save using any notepad editing software.Although,we would advise keeping them all. :)
The included races are as follows:

And what about adding a race mod that is not included you will ask.
Again,no worries,as most are still fully supported and can be added back easily.
The procedure goes as(we will use the Renegade Guard as the example):
Open the Unification_Bugfix_New_Races module file with the notepad programme of your choice.
Navigate to this location.

And add as a required mod the mod you wish to be included like this:

EDIT:Potentially,some mods may be overwriting the Objective Points and FreeUI mods that are integrated in Unification,so it is advisable to add them as required mods if you are adding unsupported races!

And save.Inside the module file exist the names of mods that are excluded but can still be activated if owned.

In addition,if there is enough popular demand,we will release each race mod as standalone in the coming days.Please note for us at the moment,Unification had and has priority.

The Campaign Configurator.
You will notice this version also comes with the long promised campaign configurator.This little programme allows you to enable win conditions in the campaign(like for example,the Optional Units and the Titans).
Just,before you start a game,enable the desired win conditions and click save.These will be injected into the code and will be applied once you start.These do not affect multiplayer(as they have their own in-game win conditions).(Needless to say,Unification comes with the persistent bases fix,just like in the Dark Crusade campaign!) 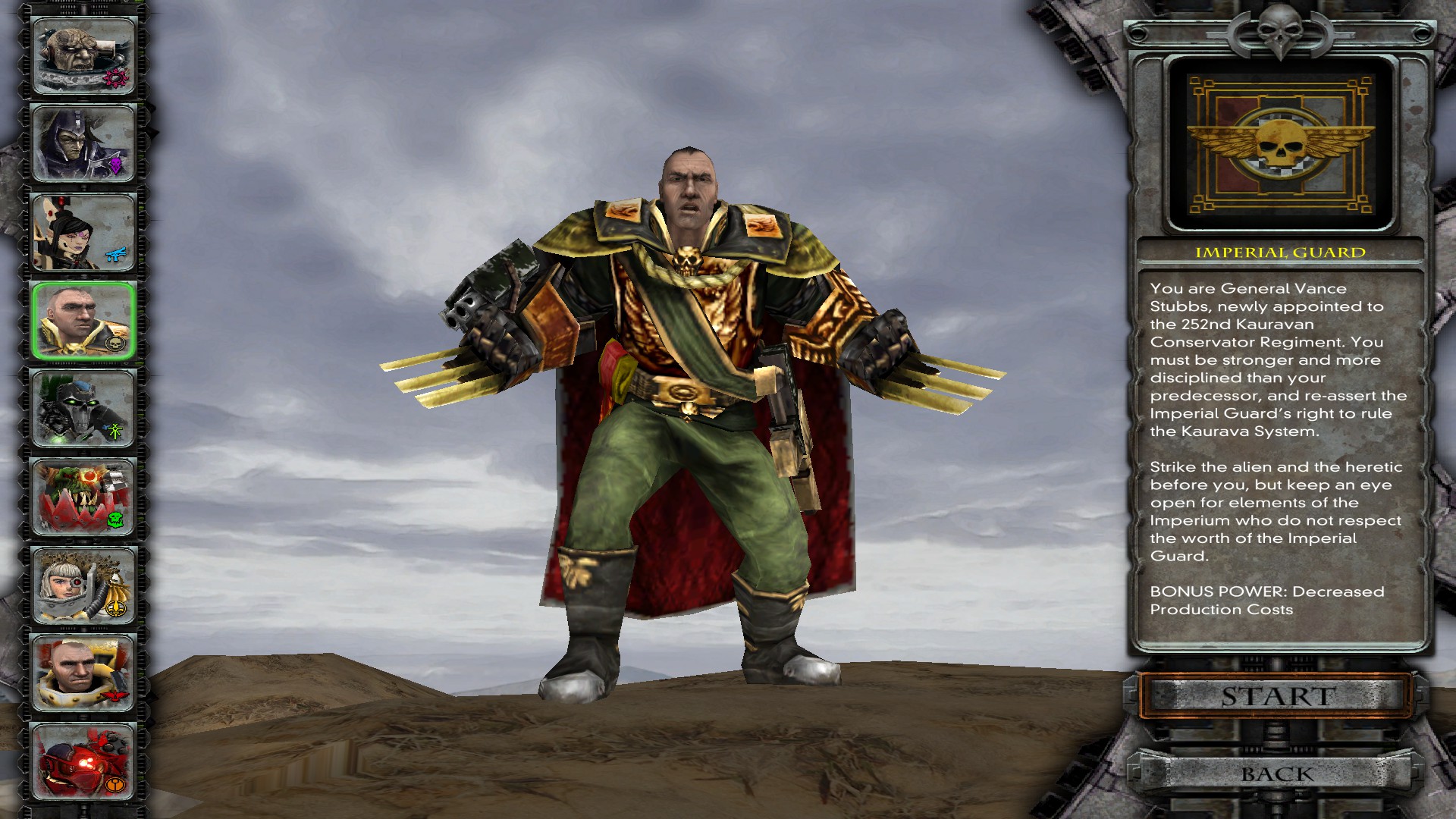 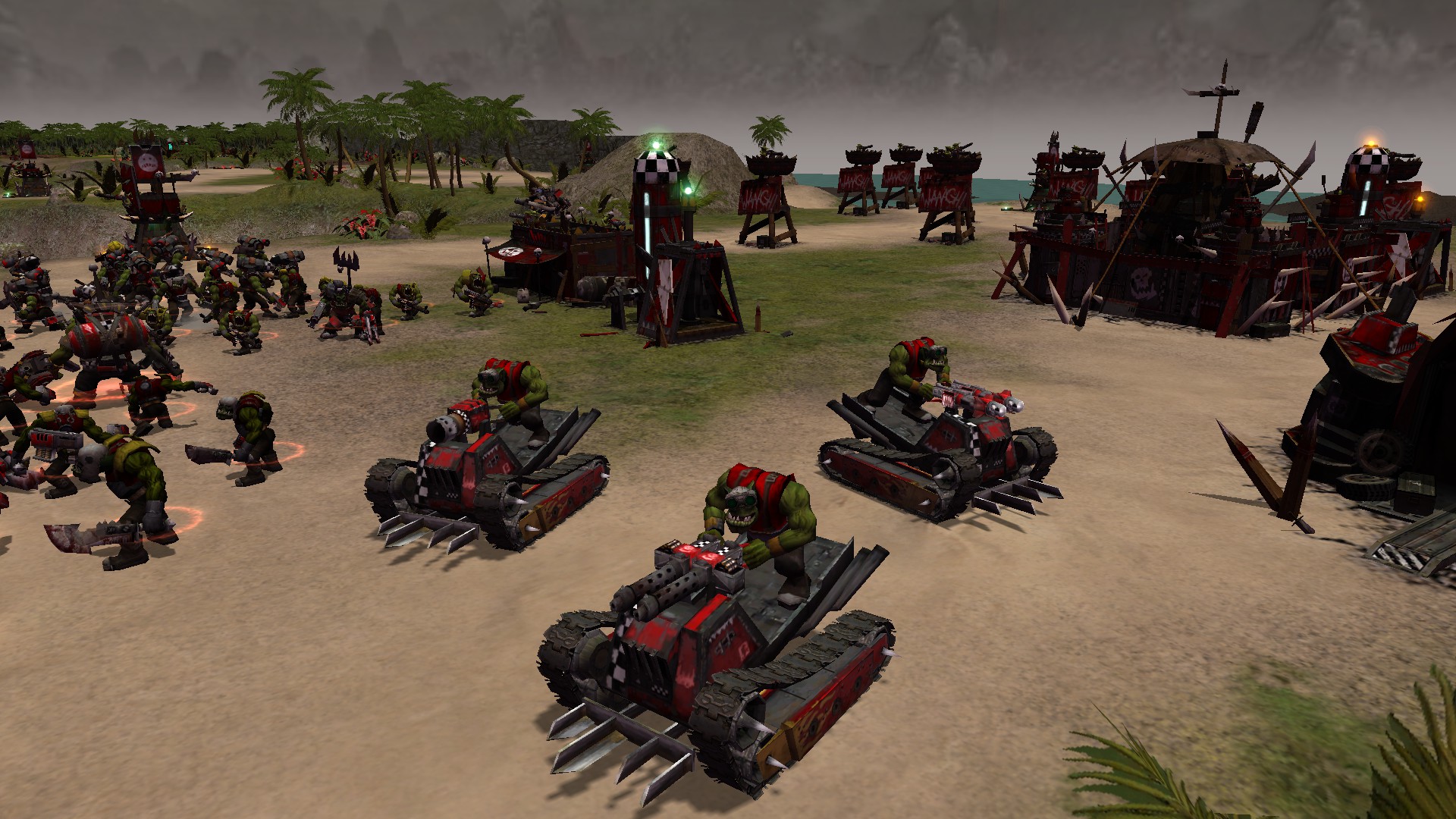 In addition,we believe we have managed to fix the long annoying movie CTD bug from the vanilla game that occasionally happens.However,please let us know if it also works for you or are experiencing issues as indeed,it is one of the most nasty bugs the vanilla game has.

And we would like to conclude with the launch of our Official Discord Server!
Once the downloads have been verified and the countdown ticks 0:00,we will release the server invite to come and join us.There,feel free to share your experiences with Unification as well as let us know of your feedback,suggestions and ideas.Helps us shape the future of Unification together!

For your consideration,a full credits list is located here.

We deeply thank you again for your patience and continued support over all this time.We hope from the deepest depths of our hearts that Unification brings you as much joy as it was for us to develop it.
We hope to see you on the battlefield! 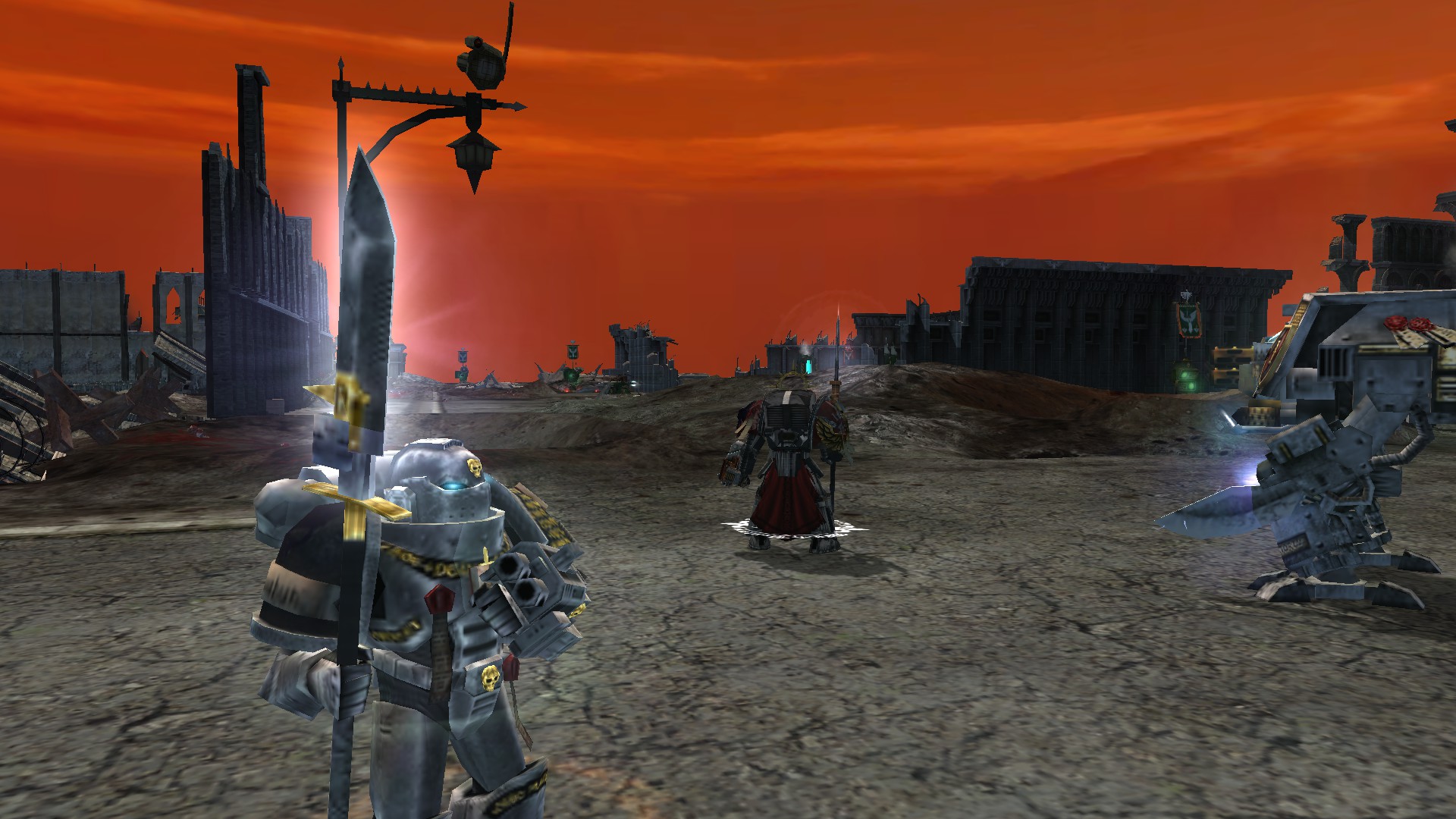 the emperors light shines upon us this day

Hell yeah, surely the dark gods will reward all your hardwork.

wheres the download link or do we have a timer for when its going to be released?

It's about 20 minutes less than 8 hours from now.

i burnt my damn beans thinking the mod was released

There is a countdown.Just the article got approved a bit too earlier this time.Usually it takes up to a day.
Once the countdown hits 0,the mod will be available to be downloaded.
We would also recommend against googling for the mirrors before the rest are released.

would it be safer to do a a clean install and remove all previous mods to not get errors?

Your call but just deleting the old installations should be fine.No need for a clean install of the whole game.
The installers do it on their own but if you go for manual installation(as it is possible as well),then you will have to delete any previous versions of the mods yourself.

Will the mod release include all races mentioned above already?

The Time is near!

Praise be The Emperor and the holy hands of the devs for giving us this blessed mods, awesome work lads!!

Hey guys, pardon my ignorance but could you make a video or article on how to update to the new version? i´ve been having some troubles getting it to work:(

A quick question m8, is it necessary to download the Race mod package even if i had the latest versions of all of the supported race mods? srry for bothering

I downloaded this mod and now my game isonly taking a quarter of my screen and the tyranid mod isn't working after using the installer. any help? please!!!

Run the gamesconfigure exe.It is the fault of the mod itself but rather the Nvidia drivers update.

Hi. Could you add support for this mod ? Moddb.com

Or create your own system implemented in mod settings?

We have specified it will be done in the future as an optional addon by us.

I have a problem : my "warrior acolyte" (daemonhunters) is a pink cube. :/

(PS : My install is clean and I don't have any other mods installed)

An unfortunate corruption of the army painter file during upload.In-game,it plays fine.
Known issue,will be fixed in the coming patch.

Could i have apoclypse with this mod ? or is it incompstible

What a nice time 2B here ˇˇ
Emperor delivers!

Hey, I wanna thank the whole team for great work - mod is awesome, no problems with installation and no crashes, I love the survival mode and its so cool you included the factions in the mod already.

WHAT IS THE SONG!!! the song that comes with the installer, what is it?? fckin banger of a song

Hi, the mod is awesome, but I can't find vindicators, sternguard infantry, only one land raider...for space marines. Am I missing something?

Have you looked in the rest of the races?
It is not just vanilla SM you know...

Yes, and the rest of the races are awesome, but i dont know why units like these are missing. For that reason i asked this because for some reason i forget to install something...

We will add more units to the vanilla SM as the mod develops.But the units you ask are already in the rest of the SM races,like the DA,IF and Salamanders...

Thanks for your reply!

Hi, maybe it has been asked before but what about the pop cap?
Has it been modified?

There are Win Conditions which increase it.
Choose the one you prefer before you start a match.

downloaded the 3 files to the same folder. ran the installer and installed everything (dl the nids nad other file - extracted them to the soulstorm folder as per those instructions) but when I run the game it's the basic races. What am I missing?

I did notice the nids in skirmish mode only and they worked just fine (and are really cool btw). It feels like something didn't install right but I redid it and it looked ok.

I feel stupid. Just found the Game manager button that allows you to turn on each mod...

The main mod works in tutorial but crashes after that though

Hey, am I missing something or is Rage not selectable?

Is there a known problem with Campaign mod and the Space Marines? While playing the as the Tau, the Space Marine main scenario can't be completed. The tracker shows 1 beacon remaining, and it isn't anywhere on the map. There is no way to finish the map, have to give up and go back to the system sector map.

I'm having the same problem, with both Tau and Imperial Guard. Even after destroying everything on the map it claims there is 1 beacon left.

Space Marine reinforcements keep dropping near the critical location, below the airfield.

Hello, I love this mod but I am having 2 Issues. 1st is that campaign will literally not load and freeze the game, 2nd is that some factions for example simply will not load like Emperor's children will give me (cannot create dump file error 183) then crash, or I play Blood Raven 1st company and it will give me a relic crash file, I also encountered an error in link to lack of space in the Temp files. All of them forced or froze the game. Otherwise, everything else works great.