The continuation and final quick summary of the development so far. Featuring old screenshots and mockups...

In part one of the story so far we recapped the development up until Office God was shelved because apparently it wasn't "fun" and people didn't "like" playing it, and it wasn't really a "game" at all. You pampered prima donnas always needing to be entertained! In my day we played an atrocious PC port of Ghosts ‘n' Goblins and said thank you!*

Years(!) later I took Office God down off the virtual shelf and decided to retool it into something less mystifying. I forget why I was motivated exactly, but I had probably watched something inspiring like The Terry Fox Story or Over The Top.

The macro-game of emailing, watching skits and reading chat logs was still cool, but I knew I needed to give the player more agency and a feeling of cause and effect so I figured the obvious improvement was to allow the player to actually assign work to the employees directly. Also many testers would say "how do I assign the work?" so that was a good clue too.

What happened next was a slow-motion shamble through a basic gameplay theory textbook, following every rudimentary example, including the examples labeled "what not to do". Spread over years, I tried to figure out how to make it fun to assign work to the employees through the technique I call "slow and painful blindfolded iteration". Many of you reading this will see the mistakes I made very clearly, and think "it's like this guy hasn't even read Elementary Gameplay Mechanics: The Basics of Fun" or some other first year seminal work on game design. And you're right, I didn't. Instead I looked for the answers in the bottom of a bottle. If the bottle is the internet and looking for answers is me arguing with strangers about politics and watching Worldstar fight videos.

The first playable attempt was assigning randomly appearing projects, each with three stats that caused the assignee's "workload" and "stress" stats to rise accordingly, in exchange for the third "reward" stat, added to the player's score. Workload and stress were capped at 100, and both fell gradually over time, at a rate dependent on the character's stats. Stress had a complicated relationship with the workload start and employees would more likely reject work based on a high stress level.

PROS: It was realistic to the management and office work metaphor, trying to get work done without stressing your employees too much.
CONS: Gameplay was mostly boring, assigning projects to the "most correct" candidate was obvious and without downside or consequence. Reward points? Who cares? 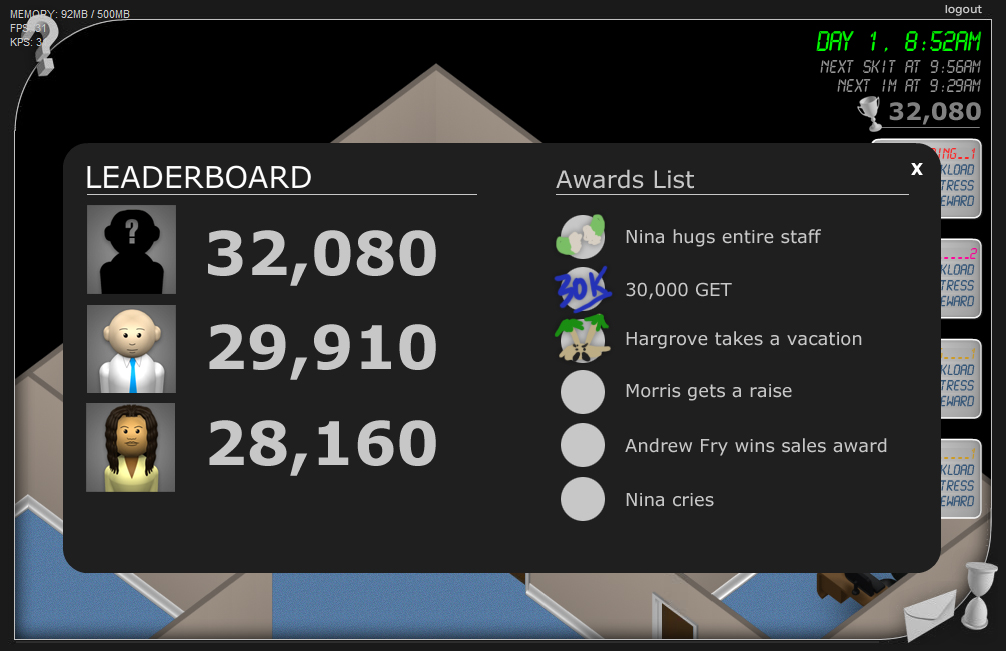 I didn't give up on the core of the gameplay and thought that if I made the reward have more consequences, that would be compelling and motivating for the player. How do you motivate people? Competition! I created two other AI bosses who would "steal" work that you didn't assign in time and get the reward for themselves.

PROS: An improvement with clear goal of keeping ahead of the other two middle managers.
CONS: Base gameplay of endlessly assigning projects to the obvious recipients remains unchanged and still boring.

Here is where I absolutely lost my mind. I wanted to give short terms goals for the player to hit -- daily project completion targets -- since a common early tester complaint was that they were lost and uninterested in long, days-away ambiguous goals. So I thought daily targets for each department could be the answer, and also have a side-effect of increasing the drama between departments, based on their relative performances. Then after a little development break I fired up the Office God files again and with fresh eyes looked upon the monster I had created: 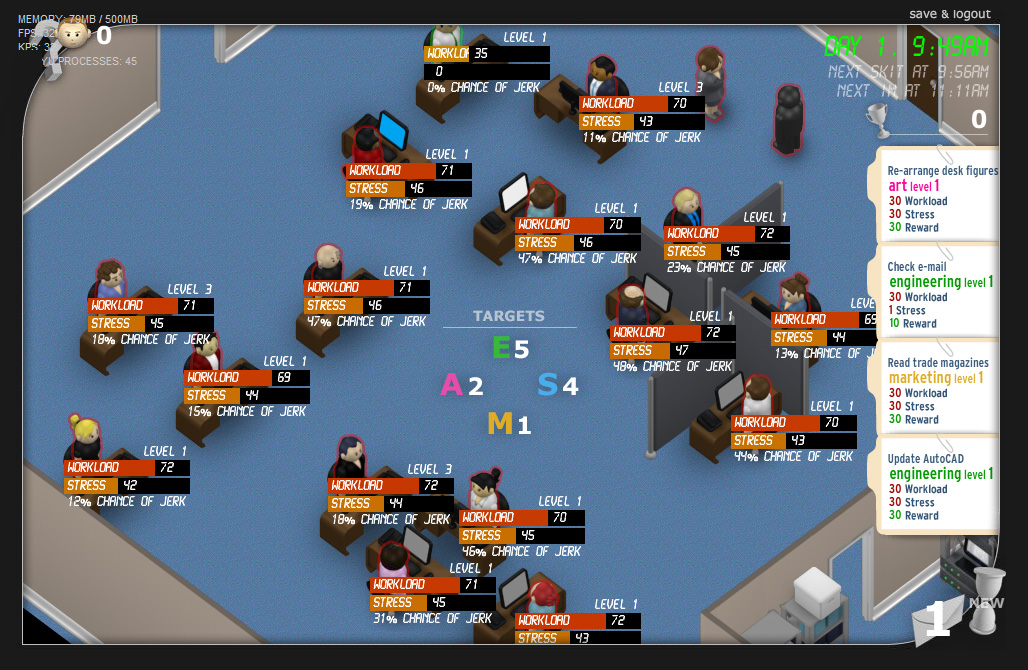 Does that look fun to anyone? And how intuitive and non-intimidating for a new player!

PROS: The manila file folder and paperclip assets I made in this era, which stayed until launch.
CONS: All the chore of navigating a complicated starship, none of the warp drive.

Some people have to hit rock bottom before they rebuild. From my low came a new breakthrough idea, and I began to hack off "features" in the game like I was blazing a trail through the jungle of bad game design with a machete. Cutting the targets, cutting the reward points, cutting the stress stat... This was when I felt most like a competent game designer -- having the terrible game in front of me and being able to terminate the bad parts with extreme prejudice.

But I was only macheting and terminating things in my mind. For this much overhaul to the code I needed Craig's help again, so I pitched Craig on a new gameplay mechanic: checkmarks and stars. You should see Craig's face when I explain that I have a new idea to save Office God, and all it requires is some of his time and effort. He hides it well, but he hates me so much.

The plan was that each task assigned gave a certain amount of checkmarks for work completed, based on the employee's Skill stat, eventually hitting 10 checkmarks which gives them a star. Stars are cashed in at certain points to advance the game.

Also introduced in this iteration was Boss Directives, which was a direct result of testers still explaining that they don't know what to do or why they're doing it or if what they're doing is right. Then it dawned on me that workplaces have bosses and very specific goals, and since this is a game all about middle management, let's do that. I put little faces of Charlie Hunter, EVP and Nina Parsons, SVP, up in the corner, constantly letting you know what they expect from you. 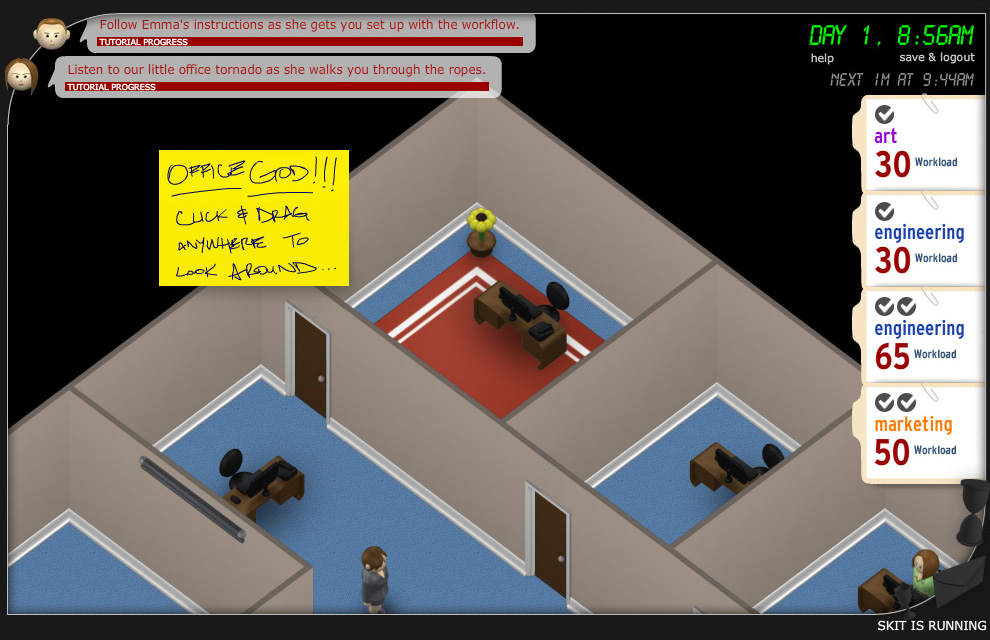 PROS: Removed stress stats, reward points for the player, and even more numbers and bars than I've listed here, if you can believe it. Boss Directives clear up most confusion and remain a launch feature, hooray.
CONS: Assigning work is STILL quite thoughtless with no risk/reward, no reason to choose one move over another acceptable move, as both move can be completed in any order, adding checkmarks to all employees equally.

It's easy to play someone else's game and describe all the ways it sucks, along with every step that could be taken to fix it.

It's very difficult to critique your own game, however, and not always because of pride as you'd assume. Often it's the opposite, which plagued my Office God development: I thought the whole thing was acceptably mediocre, too impossible to fix, and perhaps even the best I could do. Yes, it wasn't that fun, but maybe I just didn't make fun games? Hey, I've played a lot of games in my life that weren't fun, and here's another one.

But finally, late in the Office God development I had excised enough unfun elements to finally clear my vision. With that came an ability to identify and label problems in the game using language that was clear and actionable rather than vague and insurmountable. I went from "this is rather boring but I guess it's just a boring game" to "there are no consequences or rewards for the order in which you assign work to the available employees. This makes the game uninteresting, as a simple script could assign thered work for you. There needs to be an importance to the order of the assignments."

I went to Dollarama, bought a few packages of dice and sat at the coffee table until I had a system for assigning work that replaced valueless checkmarks with something that matters: 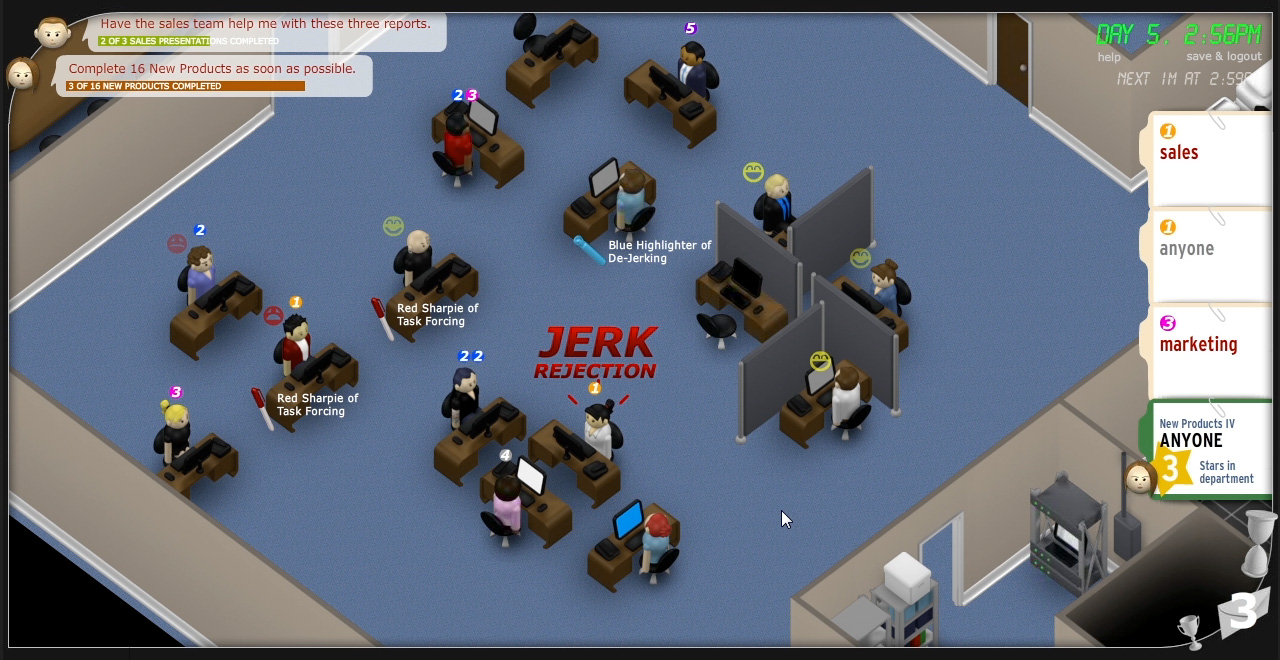 Creating stars by matching OR adding up five different workloads:

You can check out the gameplay of Office God more in-depth in this huge write-up: Officegod.com

PROS: Finally an assigning gameplay that rewards good moves but can also be played slowly to get out of jams. I knew it was good when I was hoping for certain workloads to show up.
CONS: I needed to wrap up development, so let's just say none!

Again, I know it's hilarious that I had to come to an age-old gameplay mechanic like "number/colour matching" from scratch, but that's the way I operate (apparently). I think I'm doing something incredibly original right up until I discover that a great solution is the one that has been used many times before. I call this Blackwell's Wheel Re-invention, and I hope one day it'll be as big as Carmack's Reverse.

* We didn't really say thank you. The $40 wasted on the DOS version of Ghost ‘n' Goblins hurt so much, I basically stopped buying PC games for the next 15 years. Capcom still owes me a $40 reimbursement or apology.