In which I start building the final world and challenges of the game.

Hello IndieDB! I've just added the site to places I'm mirroring my devlog posts to. The list was first being updated on itch.io and GameJolt, so check it out!

The most prominent thing I've been doing since last time is making the final boss! But first, let's talk about the final ship in the game. 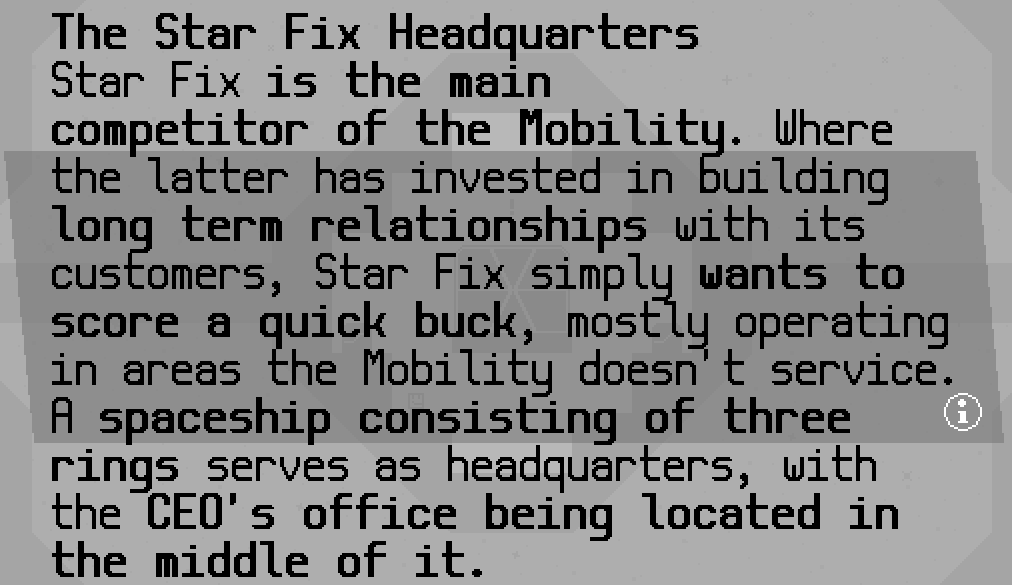 So basically the Star Fix (by far the best/worst pun we've come up with yet) is an evil, greedy corporation, and they're also competing with the Mobility. I'm sure there's a good reason you would want to travel here during your training, right?

I can at least tell you that you're going there to defeat a boss!

Here are a few reasons why I've never created a boss before!
- It takes a bunch of time to create and polish such a boss. Time you could've spent on actually making the rest of the game, which more players are likely to experience, more fun.
- If you're making a game where your character has no access to any offensive moves (read: most of my past games), actually battling a boss becomes kinda hard. You need to create new mechanics in order to make that work. Introducing new mechanics at a final boss is a no go for several reasons.
- You need to make a bunch of moves for that boss that feel fair, don't glitch the game out and can also be changed up so the boss becomes harder to damage the closer it is to defeat.

Here's why I am making one for Mobility:
- I just want to try it out at least once. I've got good base ingredients to make a boss with this set of mechanics.
- Most of my previous games kinda ended with an anticlimax (e.g. without warning, the game is suddenly over). Since this game has a little amount of story, I do want to wrap it up nicely by building up to the climax nicely.

So let's make a final boss! It looks like the main character, but it's a lot bigger, black and also a robot.

So the boss is basically a moving platform. It has some arms that snap to its body. The arms are deadly, and you need to avoid them to reach the robot and touch to deactivate it, like most other platforms from the game. Then, it'll reactivate itself a couple of times until it's defeated.

Teaching it to flip around

You can touch its body (I think I'll replace the big arms with circle saws later) to deal damage to it. Which means that, most of the time, you will be jumping on its head for damage.

There were a lot of funny accidents while programming the boss.

Getting the robot to move right was kinda difficult. It kinda looks like it's dancing...

I even made a little ARMS clone by accident!

I think I'm being followed...

That's it for now, but you will definitely see more shenanigans from our little big robot friend.