It's new, it's spacy, it's sci-fi: The layout of Xarelok is getting sharper, and closer to its final look. Today's media release covers the third environment for the game, following the mining colony Gor Rugi and the military tech center: The Worrajug Space Station. As it is the best guarded space within the Worrajug Empire, this is probably the place where you're going to have the most fun. 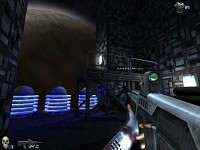 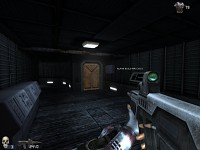 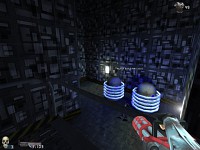 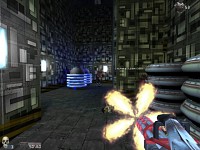 Light decals and shaders create a nice indoor-atmosphere, and our planet skybox in the background makes a good outdoor experience. And we will equip you with high-end weapons, the Mini-Gun and the Tavor Sniper Submashine, both powerful and suitable for a nice carnage in space.


Although the FPSC engine does not give us much scope here, we've managed to establish some kind of low gravity for outdoor areas. Whenever you move outside the space station, you'll have doubled jump height while keeping the jump height normal inside. We're using trigger zones for the control of this feature. Although it's not 100% the same as that original slowly gliding low-grav fun like in the industry games, it still does the job to create a good sci-fi gameplay feeling.

We've had lots of trouble while designing the conceptional level for our space station environment, rendering errors as well as performance problems made Xarelok a haunted development project for nearly all the weekends of May. But now, we believe we've banned the ghost from the mashine, and everything works fine again. But... you never know...

We are happy Thomas-Adam Habuda is joining dhk Games. He will be writing an exciting, driving soundtrack for the game. So come on, be nice, welcome him and say hello to Tom

You can check is online portofolio here.