Posted by TychoCelchuuu on Jun 8th, 2010

The Vortex Tactical Shotgun
For this update we wanted to give you a further look into the Marine's arsenal, with the all important shotgun. 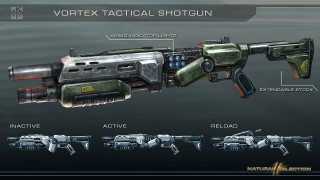 In keeping with the look and design of the rest of the NS2 marine weapons and equipment, the shotgun deploys out of its compact inactive state when drawn. We wanted the shotgun to have a reasonable amount of bulk and to feel solid and powerful in the first person view. Here is a render of the finished in-game model: 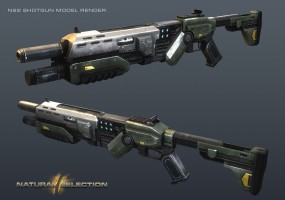 Beyond the visual overhaul, the essence of the shotgun remains intact from NS1. It is a beefy upgrade for marines which will allow them to take the offensive early and push through an expanding or unprepared enemy. Currently it is also good vs. armor so it should also prove effective at larger aliens. It's biggest disadvantage is its range - it won't be accurate or effective at medium or long-range targets.

And here is some brief in-game footage put together quickly to give you a taste for the what the shotgun looks and sounds like in game as it blasts the heck out of walls, dust particles, and thin air.


You can also see that we're doing our best to keep the HUD clear of numbers by putting the ammo count on the weapon itself. We're hoping to have the 6 lights on the side indicate how many shots you have left in the clip but this isn't implemented yet.

We hope you enjoyed the quick look at this trusty marine staple! Let us know what you think.

Great looking shotgun, and wow, the sound is awesome. Didn't know this video was loading, I was on another tab, and my sub was at full. Scared the crap out of me. :D

On a side note, NS2 is showing up as a Half-Life 1 mod on the home page.

Everything looks nice but shouldnt it have a little recoil? its a shotgun lol

It IS a futuristic shotgun, perhaps it has some kind of recoil reduction that we don't know about ;)

Conversely, if this is the future, and technology had consistently gotten smaller (as it has), including guns (as they have too), then why is the shotgun so big and beefy? So if you're going to dispense with that, might as well give it the recoil a shotgun deserves, to compliment the powerful feel.

Also, I'm not quite sure why the shotgun is good versus armor, when shotguns have lower velocity and less projectile mass than most other guns (Modern day shotguns can't even pierce kevlar with buckshot, let alone ballistic plates, thanks to the energy already being spread over a large area). I guess some phlebotinum could explain it or something though.

Seen AA12? Here's a video about it: Youtube.com

Even if they shoot 20 rounds fast they can still aim properly at the target. And that is a weapon of today. Shouldnt it be even better in the future?

A) The AA12 is a heavy P.O.S. We already had a decent automatic shotgun, it's called the Saiga 12. It held 7 shells by default, and if you wanted more, you got a drum mag. It's smaller and lighter than the AA12, and does exactly the same thing.
B) It could just be me, but I think it would be better to but the loading on the bottom of the shotgun. It takes more time to bring your hand to the top of the weapon than the bottom of the weapon, you know. Plus, looking at the video,I have no idea where the hell he is pulling those shells from besides mid air. Having a top loading shotgun may be a cool idea but for the love of god do not put it in the game.

The Saiga is semi automatic not automatic.

For the shell to load, rather than holding it normally and having the hands insert the shells from the top, have them hold the gun diagonally so the slot which the ammo is inserted in, will be closer to the bottom of the screen, making it easier to pull ammo into the screen without making it look like magic.

Maybe have a rack that shows the shells on the side of the gun (could work as an upgrade that increases ammo capacity of the gun for reloading)?

Other than that, a better visual would be clips you can insert into the shotgun to reload it. But it usually would be on the bottom side... Maybe clips of shotgun shells can work if it's horizontal, and is inserted through the side of the shotgun. Otherwise, vertical and inserted from the top.

If you look at the stock of the weapon it has a hole in the middle its only atatched to each side of a pole so it could (i dont know if it does) slide down in when the gun fires.

Probably to make it interesting! It's pretty common in the modding community to put the ejection on the 'wrong' side so you can add more interesting animation; check out all the CS:S skins on fpsbanana :)

I don't play CS - too boring for me XD

the reloading looks kinda funny. Lots of shotguns use clips these days, too. I think that would look a lot cooler, if he inserts a clip and just throws the old one away or drops it.

Even though it's a very sci-fi concept it still looks like a shotgun, so that's well done!

Get that ejection port on the correct side of the weapon before release or I swear to god I will punch a baby!

i smell an alpha release

A someone someone told me that it will this fall =)

Sorry I could not resist that for some reason..

It'd be cooler if it used a magazine, like, why the hell not? But, not going to lie, that's a bad *** shotgun.

if its top loading shouldnt the barrel be on the bottom, and why is he using a left hand configured shotgun right handed

other than that its great

Hm, I like it aesthetically, but the nerd in me is annoyed by the same things mentioned in the comments above. How do the shells get from where they're loaded into the gun to the magazine when the barrel is directly between them? Also, the ejection port throwing casings in your face would be kind of annoying...

I love the way he pulls that gun out. It has the right attitude!

This shotgun really looks sick, but I agree with everybody who said about the top load barrel, change it.

The reason the ejection ports are on the wrong side for most if not all weapons, is for the aesthetic reasons people... It makes it much more interesting to see the shells coming out than to not, am I right?

Then for reloading, if you really want to keep to the top loading, make it so the player holds the gun pointing upward or downwards to load a shell in. If you want to pop the shells out, have the player aim the gun up and open the slot for the casings to fall out.

Otherwise, provide a plausible explanation for it, other than saying it looks cool. Confused player base is not a good sign to keep staying on the idea btw.

How exactly does that work? If you're loading it from the top it looks like you're stuffing the shells directly into the barrel, instead of what I'm assuming to be the tube magazine that the pump goes along

there is a lot of faults with this gun and it's animation. isn't it suppose to be the future? I am pretty sure that pump-action and tube fed magazine would be obsolete by now.

if you just gotta go tube fed, please put it at the bottom.

That and there is also the AA-12, which is full-auto and drum fed, so it would make sense that something like that would be standardized for military use.

I like the model, the animations, the textures etc. I also like the shooting and the reloading sounds. But the sound for putting in the shells isnt "metallic" enough, I think. It´s quite close to the sound which is played, when the small ammo-display shows up. If you wanted this to be like that: no offence. Just my first impression. And second and third ;)

why did you made the shotgun that long if it only have a small distance to travel (because you load in the front of the weapon) ?

Is it just me or is the FPS really bad in that video?

Have you never tried to record a video in game on your computer before? ;)

The sound is very satisfying.

Would a softer firing sound be more "aesthetically" pleasing? If you look at the gun the nozzle is smooth, soft, thick and relatively stubby. Imagine a soft, short, muted sound, like a short burst of compressed air, mulling down that loud, crunchy, open sound it currently has.

My 2c. Of course I'm not thinking realistically, but purely aesthetically - in reality it could sound completely different. I'm just imagining what it would sound like by looking at the gun.

I dunno.. personally after a long time of playing NS1 I got sick of the weapons looks and sounds as I felt they all sounded a bit weak.. would hate to have to replace the sounds in NS2 as well due to the same reason.

*glares at CoD World at War* Don't get me started with you...

Hmm, I'm not thinking World at War soft (good example). Those sound really light. Makes it feel like they're not doing much damage hey (especially when the enemy gets back up every 2 seconds).

I was thinking a heavy boom, but *softer*, or shorter, and not so strikingly crunchy.

game is taking to long imo

Wow guys. If any of you are asking why the shell loading is done from the top- tell that to Bungie =D

Apparantly, everyone is focusing too much on the creative aesthetic looks, rather than balancing it out with functionality and standards.

Plus the area where the shells are inserted are too close to the barrel... Maybe make the slots even bigger so it'll look like the center of the gun flips open to allow you to load it?