Though the mod is just now being published, it has been under development for about a year and a half, and previous mods (for other games) with the same objectives as this one have left a great deal of notes and research material for me to use, which has not yet been exhausted. In this update, I'll be laying out some previous accomplishments, and this week's objectives.

The last few weeks have seen relatively good progress being made, particularly with regard to the replacement of all 5 vanilla factions. Currently the plan is that the mod will eventually not even load from certain vanilla folders and thus save up memory for the game to run with, though the mod is currently rather lightweight and does not experience many problems outside of the "normal" A&A instability.

Currently implemented factions as of this week:

USA = United States Military (gmf23/gmf34) (Night's USA is not currently planned to be in the mod, though all things are subject to change)

101AB = 101st Airborne (Iceball727) (I am very lucky that I already did all my research on this group, since his account appears to have been deleted sometime recently, lol)

REMEMBER THESE ARE NOT ALL THE FACTIONS PLANNED TO BE ADDED, ONLY THOSE WHICH ARE CURRENTLY IN-GAME. One great thing about A&A is there is seemingly no limit to the number of factions which can be added. Famous groups like the Vaktovian Empire, Roblox Assault Team, FEAR, UAF, APN, and my own group, MB, are all to be included in the future.

The plan right now is that the USA, JPN, GBR, and GER tags will be deprecated in favor of the more specific USM, EOJ, BRD, and PL tags respectively. We'll be keeping RUS since it fits and there aren't actually that many other Russia-centric groups for it to be confused with.

Most of last week's progress has been on adding the Red Devils to the game - I no longer have to deal with a vanilla GBR showing up when I test things ingame. This was a small group "historically", with certainly no more than 100 members over the course of its very short existence in 2012, but at the time I felt it was the best fit for the GBR tag, before I made the decision to replace all the tags anyway. It also actively fought with Panzer Lehr, so there was a development reason for favoring its inclusion before the British Armed Forces, or BAF, which was the other major british group competing for the GBR tag.

In any case, the Red Devils are actually amongst the most complete factions in the game at this time, and only requires a few more units, as well as new building and vehicle models, before it could be called a fully complete faction. Their main strength comes in rapid deployment and early game power with very lethal infantry units, including airborne units. The problem is that you suffer from a manpower and command limit shortage that seriously disadvantages the faction in the late-game, and against vehicle heavy factions like the Panzer Lehr you need to be quick and aggressive to defeat the enemy before they can saturate the battlefield with armored units, against which you have few counters besides airpower or your own very limited armored units.

Some more balance work has also been done on USM; we'll be putting out some sort of article detailing how that faction is going to work, since it functions somewhat uniquely amongst the other factions in this mod due to its complex divisional structure; essentially USM is a collection of subfactions representing individual Army and Marine divisions, and you are seriously limited to what you can produce as USM, outside of what "historically" that unit had or could be reasoned to have. That said, things like air support will always be available, though the form it takes is also to be dependent on subfaction.

The next week's priorities are going to be to finish the British Red Devils faction completely - this mod will finally have one complete faction. This will be a tough objective to complete in the allotted timeframe, but I think it can be done. Besides this, I think with the official announcement of this mod, it is probably a good time to replace all the vanilla tags as discussed earlier, though this will mean the vanilla campaign and ww2 modes will be basically disabled until such a time that entirely new ones can be made using the new tags (I do plan to eventually have a completely new metagame map and setup, as well as new campaigns for several factions.)

Below: a little collage of past progress on the mod. And with that, I'll be back next week with a new progress report! 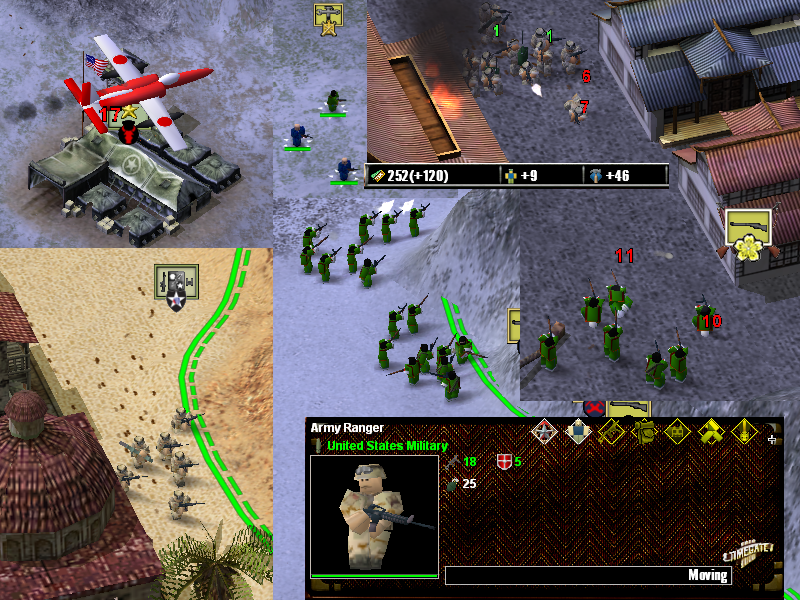