Today in Part 4 we show off renders of the final group of submachineguns to be included in version 2.56, and also give a brief overview of the new content coming on Friday.

Today we are showing off some final renders of weapons you will be able to use on Motovskiy Bay, and also covering some of the other changes that you will be able to find in 2.56. Firstly however, in acknowledgement of the large download size for 2.56, we have prepared a pre-release file that you can download now. We will release the password to this on Friday at the same time as the patch is released to the FH2 Launcher. 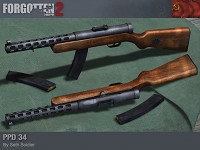 In the late 1920's, fresh off his successful light machinegun design, Vasily Degtyaryov began to work on a submachinegun. Initially just a scaled down design of his earlier DP including the pan magazine, by 1931 it had be refined to a more conventional design with a 25 round box magazine chambered in the new Tokarev pistol cartridge. This design was finally adopted by the Army in 1935 as the PPD-34. Initial production was very slow, hundreds to a couple of thousand a year, and the Army was struggling to find a place for the new weapons. All in all, no more than about 5000 were made.

In early 1939, an update to the design was introduced as the PPD-34/38, featuring a few minor changes to make the gun stronger and make magazines more interchangeable. However around the same time the Army withdrew all PPDs into storage in anticipation of the new SVT-38, and only a few NKVD border troops kept theirs. This would soon change again however, with the Winter War giving the Red Army a brutal lesson in just how effective submachineguns could be. 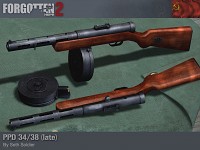 In December of 1939, the weapons began to be re-issued to the Army, and by the middle of January these were supplemented by a drum magazine copied very closely from the Finnish Suomi KP/-31. These drums needed a feed tower to fit into the magazine well and were not considered reliable. About this time, the cooling holes on the barrel jacket were simplified to slots. No more than 15000 PPD-34/38s of all types were manufactured until March 1940. 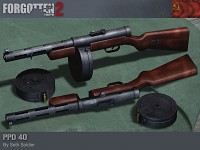 To simplify the design further and allow for a more reliable direct copy of the Suomi drum, the design was modified again. This new PPD-40 was visually distinct from its predecessors, with the two part stock to fit the new magazines. It also initially featured a fixed firing pin, but this change was problematic and was reverted within a month. About 80000 PPD-40s were produced during 1940 and into early 1941 before being replaced on the production lines by the cheaper and quicker to produce PPSh-41. Production of PPD-40s would continue inside the Siege of Leningrad using old tooling left behind by retreating factories, with nearly 45000 made to the start of 1943. Our PPDs have been made by Seth Soldier.

Many further changes, including:

Many new and improved vehicle engine and track sounds

Improved animations and sounds for many handweapons

Improvements to weapon projectiles, including accurate tracer colours, other effects and sounds

Reworked recoil for most handweapons

And last but not least, the final batch of screenshots showing off some new content: 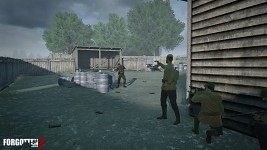 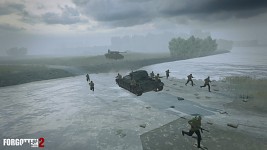 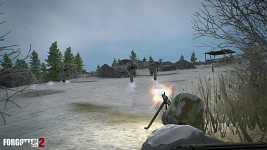 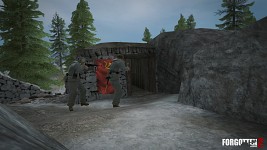 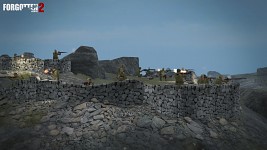 Will be AI improve too?

No, since there is no real way to improve the BF2 AI. It is what it is. FH2 is a multiplayer game, AI related things are nowhere near a priority for the development team.