Today in part 2 of our pre-release news week we show off a couple of Soviet tanks that also saw good service in Finnish hands after capture.

Today we are continuing where we left off yesterday by showing off two more vehicles that you will be able to find on the new map Tali. 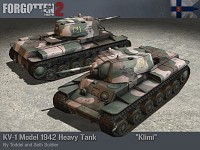 The Finnish Army first encountered the KV-1 in December of 1939, in a Soviet attack on the Mannerheim Line. This new design was essentially immune to their 37mm anti tank guns, and even the tracks were resistant against the most common anti tank mines. Still, they proved vulnerable to large satchel charges, and this might explain why only 2 of the type were captured and re-used. These two KVs were an up-armoured "1940" model and a "1942" model.

The model 1942 KV-1 was captured on the River Syväri in the spring of 1942. In Finnish service the tank was found to be far from ideal. The crew were especially blind to the outside, and the shortage of spare parts and general unreliability of the vehicles meant they spent a lot of time in repair depots. Fuel consumption was noted to be more than twice that of the T-34.

Both Finnish KV-1s would survive the war, being retired in 1955. Our model 1942 KV-1 was modified from Toddel's KV-1S by Seth Soldier. 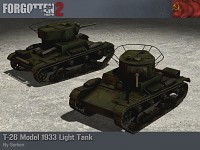 In 1930, the Soviet Union purchased 15 of the twin turreted 6-Ton Type A tanks from Vickers-Armstrong, along with the technical package to conduct their own further production. After a period of testing, the first T-26 design was accepted into service in 1931. This differed from the 6-Ton with slightly different turrets designed to take the DT instead of a Vickers, as well as a slightly modified engine that was only a near copy of the original.

In 1933, the T-26 was updated with a new larger single cylindrical turret, mounting a 45mm antitank gun and a DT. This larger turret also allowed space for a radio to be fitted, though such tanks made up less than half the total. Radio equipped tanks are visually identifiable by a thick frame antennae around the top of the turret. The T-26 turret went through several changes, in 1935 it switched from riveting to welding, in 1936 a rear DT was added, and most significantly in 1938 the sides were sloped.

In total, just over 10000 T-26 were manufactured between 1931 and 1941. They were present in large numbers during Operation Barbarossa, and consequently were lost in large numbers. While made quickly obsolete against advances in German armour, they would continue in service with the Red Army until 1945, particularly on the Finnish Front and in the Far East. 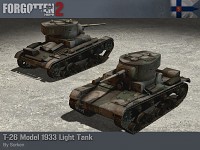 The Finnish Army had similarly taken note of the Vickers 6-Ton, and had ordered 32 of them in 1936. A few of these tanks had served towards the end of the Winter War, and most were subsequently modified afterwards into T-26E using captured T-26 turrets. However, they were eclipsed in Finnish service by intact captured T-26s. All in all, 114 captured T-26 tanks served throughout the Continuation and Lapland wars.

The majority of the Finnish T-26 were equipped with the 1933 pattern turret. A number of modifications were made to the tanks, and a few double turreted and flamethrower tanks were converted to the 1933 or 1938 patterns. Our T-26s were made by Sorken.

Finally, we'd like to end today with a few screenshots showing off some of this new equipment. 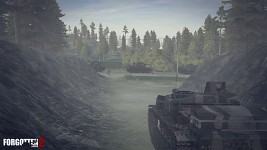 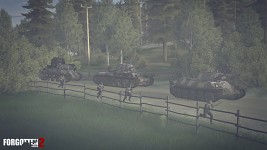 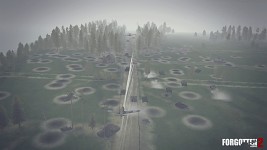 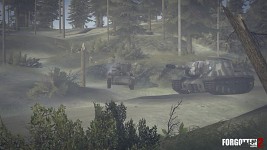