As a big thanks for everyone voting for us to make Top 100, I've decided to put together a contest. All you need to do is suggest a cool new ability for the Necrotrophs in this news post.

As a big thanks for everyone voting for us to make Top 100, I've decided to put together a contest. All you need to do is suggest a cool new ability for the Necrotrophs in this news post.

How it will work:
This competition will award two winners (each having a $20 limit for any game they want on Steam). The first winner will be chosen by you, the viewers (simply add karma to whichever post contains the suggestion you like) and the second will be selected by us, the Devs. Then, the subsequent winners of this competition will be revealed early next week. You can suggest anything from "special abilities" such as vomiting blood that covers the players screen or "passive" abilities such as increased running speed/strength, The only rules I have are:

1. Cannot be a duplicate of someone else's idea (even mine, see this entire news post).

Idea: Blood Vomiting
Ability Type: Special (the other being Passive)
Pro: Blinds Resistance players' screen.
Con: Is attached to health/stamina, the more the Necro vomits the less health/stamina they have.

Here is some information regarding the Necrotroph:
The Necrotroph is a parasite-controlled human that has been reverted back to an almost animal-like state. While they may appear totally savage, the controlling parasite can still telepathically sense the distance and condition of other fellow Necrotroph's (i.e. they not only know where eachother are, but how much health they have). The parasite is not totally telepathic though, communication is still produced through human/parasitic vocals.

If you missed it, you might also want to check out our recently released Alpha Footage to get a sense of how the mod plays. 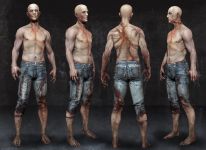 Remember to vote for The Rising if you already haven't! (click the image!) 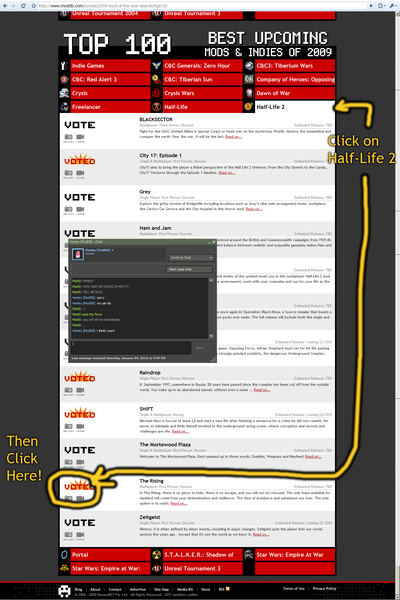 View Larger Size of this Image

Idea: Leech
Ability Type: Passive
Pro: When it deals damage on you, it heals the same amount back on itself.
Con: Nothing.

Idea: Poison
Ability Type: Special
Pro: Vomits on you, making you slower.
Con: Vomiting has a short range and takes quite a long time. The necro is also more vulnerable during vomiting.

Poor Henley :(
The Necrotroph looks straight out of Blade II

And you dont have a dad

Jackkaoshin:Completely off topic, and a terrible insult.

agreed. completely unnecessary and uncalled for. this is not the place for kindergarten conflict.

Idea: Heavy strike
Ability Type: Special
Pro: This attack is stronger and adds a motion blur effect on the victim.
Con: Attack is longer than the rest, and has to charge up, leaving you time to run/jump away.

PS: voting on karma can be griefed. (vote negative on everyone else, ask your friend to vote on you and so on...)

ability: the parasite in the necro's body will use it's telepathic
abilty to use a sharp sound deafening all player around it and also reacting on there eyes blurring there vision but not so much vision

pro:great if a necro is within a horde and making the player/ team unable to defend so when you see a necro SHOOT IT

con: the necro will rarely do this and then it will kill the necro after using this ability

Idea: Screech
Ability Type: Active (Assuming I understand that right)
Pros: Stuns/Grapples the Player (Accompanied with the Necrotroph "latching" onto the players screen, that huge maw opening up, issubing a shriek, shaking/tinting the screen/disorientating the Player)
Cons: Latches onto the Player; Easier Target for other players.

(assuming we can post more then one; and include more information/a better description)

Idea: 'Dermal Plating' (name needs work of course :P)
Ability Type: Passive
Pros: Grants the Necrotroph an enhanced ability to absorb damage (while I realize this is a touch cliche :P just thought I'd get it in), this is ofcourse assuming the modifications the Parasite can inflict, are extreme)
Cons: Slows the Necrotroph Down; along with Physical Distinguishing Characteristics, possibly a different color, Ridging/"plating" look to the Body's muscle structure.

Idea: mitoesis
ability type: special
pro: on activate tiny leach like creatures come out of the scars on you back
con: will slow the player down and do less damage until respawn

idea: Instinct
abilty type: passive ( if i understand this right)
pro: will allow infected to see through walls and locate the other players in order to set up traps
con: must be standing still for use and must be used for at least 10 seconds making you a target for other players

Idea: Prowl
Ability Type: Passive (I think, could be Special too)
Pro: Allows the Necrotroph to climb walls and ceilings.
Con: Depletes stamina.

Pro: When in a shaded area, necro players can hit a key (e.g. ctrl) and blend in with their environment, making them harder to spot. Once a player gets close enough, the necros can ambush them with a critical swipe attack.

Con: Necros will give off a low growl when blending for too long, to limit camping possibilities. Also, if their swipe attack misses, they get dazed for a bit, making it harder for them to escape the area.

This would be especially useful in areas where players have to complete certain tasks (stay for a prolonged time) and adds to the atmosphere.

(sorry also posted this on main profile, thought I was in the newspost already :/)

thank you, much appreciated! :)

thanks :) I voted + for your devour idea as well but with all these neg karma I don't think any of it will count for much. But in any case good luck to you, too :)

another +1 from me! nice idea

the hidden anyone? haha but thats pretty cool idea +1

check mine i thinks its good to!

Nice idea, but doesn't really fit the necro in my view.

I appreciate the feedback, and to explain why I thought the idea would be very fitting, is the possibility or chance of necros actually having a sense of intelligence, which would make them far leas predictable and hence more scary ad dangerous. But at the end of the day, it's the devs who decide. Any idea when we might hear about shortlisting/winners?

I actually support the idea of Necros having a sense of intelligence, although I'm a big fan of realism, and I just CAN'T see a alien organism make a human invisible.

point taken, however, don't think of it as invisibility, rather think of how a chameleon adapts to its environment. Its much harder to spot, but not invisible.

Idea: Wall climbing
Ability type : passive
Pro: Lets you climb walls so you can ambush players easier.
Con: Slow movement ( on wall ) and unable to attack.
( even though juuso93 has the same concept they're quite different )

Idea: Lock-Jaw
Ability Type: Special
Pro: Fast. Grabs on to target with their mouth, will not let go even after their head is removed from the body. Reduces the target's maximum hp by 10% for 30 seconds.
Con: They are very loud. Kamakazi attack.

Idea: Divide and Concur
Ability Type: Passive
Pro: When limbs are shot, they will break off and go into a frenzy after you.
Con: Head shot instantly kills it and all attacking limbs.

You should of done these separate because karma has to be given to each idea. The way you posted it doesn't work, and I like your ideas.

Idea: Multiply
Ability: The Necro's body divides itself into 4 smaller entity
Pro: Destraction - create 3 duplicates - they can attack?
Con: requres health - each entity takes some health to be created

Most ideas taken from l4d-l4d2 and KF? jesus.

Idea: Grappeling Tentacles
Ability type: Speacial
Pro: Grabs a human with the tentacles for a sertiant amout of time or untill the human gets help/presses a button 5 times fast.
Con: Necro cannot attack any other elements and is completley vurnable by any other force, the necro can also not move any direction. This attack requires the necro to be close to a human aswell.

Idea: Rage
Ability type: Passive
Pro: when the necro is low health, a small rage occure. It limits the necros screen abit and makes it more senter focused with a color like red. You will run 10% faster and do 15% more damage during this rage.
Con: You have a smaller screen area to watch, so humens can flank you easier. You also have very low health and if you have 250hp, it will be activated at 25hp and be on till 0.

Idea: Grapple
Ability Type: Special.
Pro: The necro catches you with its leeches and pulls you towards itself. It will bite you very hard when you reach its mouth. (Like the barnacles from HL2, but stronger.)
Con: Drains stamina quite fast. Has a limit on range, and automatically relases you when the necro is out of stamina.

Idea: Poison Rain Bat
Ability Type: Passive
Pro: This necro has grown parasitic wings, allowing them to fly over their victims as they release drops of poison from glands on their body. Indoors, it latches onto the ceiling and crawls along it.
Con: Very Loud and very apparent in the sky and on the ceiling.

Idea: Telepathic Radar
Type: Special
Ability: Increasing the intensity of the parasite's telepathy, is able to locate the position of enemies temporarily (for about 15 seconds).
Pro: The ability to see where your enemies are, even through walls.
Con: Lose the ability to locate fellow Necrotrophs for about 60 seconds, 25% health loss.

idea: morph
ability type: passive? (im not too sure)
pro: the necrotroph morphs into a human form, and acts like a spy, and can score easy kills
con: speed is slowed down to slightly less than the human speed, and morph will wear off when a kill has been made in morph form alerting all humans off the necrotrophs presence

idea:face sucking
ability type: close range
pro:uses it uses tentacles to attach on to the players face and deal massive damage.
cons: is vulnerable to other players

Idea: Ghost
Ablility Type: special
Pro: player goes invisible to other players
Con: wears off after certain amount of time and uses half of your stamina

Idea: Devour
Ability type: Passive
Pro: Heals HP by devouring corpses of survivors or other Necrotroph
Con: Got to remain in position while devouring, it's a slow prone action, and the Necrotroph is in danger of getting shot easily, while devouring.

(A little extra note: I posted this idea because I also feel it adds to the gameplay: When you finally kill a Necrotroph, you can be lucky 'n get another one, when it tries to devour it's brother, same with good use for dead comrades. - especially if you could drag around bodies)

I'm sorry for not posting an idea, but I just want to say.. I don't think the karma-voting is very fair. If I want to win I could simply give every idea a negative vote and hope my idea gets the least negative votes..

I'm fairly sure a lot of people already did that =/ I'm basing that on the fact that almost all ideas have -1 at the moment.

Indeed. I already pointed it out in one of my previous comments. Both winners should be selcted by the devs. BTW, is there any deadline?

No. Ideas on the top seem to have lower karma than ones in the bottom... :D (Exactly the opposite of what a normal article usually has.)

I mean in the top there is -4 because thats what everyone looks on first to they "-" that one in the top first and less on the oters that are in the middle :/ but if they whould give "+" karma instead then it whould be +4 instead