It's time once again to update the general public about the goings-on here at The Red Alert. Well, as of now, the infantry is about finished, and the classic ore system is in place. Some minor kinks to work out, but other than that. We haven't fully decided what to do about the Soviet's commando, but it will probably be Volkov, not dissimilar to A Path Beyond's version. There's still lots to be done, however. Don't be fooled. In fact, just about everything remains to be done outside of the bare artwork that's already in game. Sounds, weapons, effects, UI, game mechanics, balance.... Any sort of release is a long ways off, yet.

At this point, I'd like to take a moment and address a few questions about the mod that were asked in prior news posts:
Q: Will you be remaking all the maps, including expansions?
A: I hope so!

Q: Will you be remaking the campaign?
A: Most likely not. If we do, it wont be until long after the multiplayer release.

Q: Will there be a release soon?
A: No. We're not too keen on unfinished betas. Betas are for ironing out bugs and balance issues, not for playing half-finished mods.

Q: Will there be old ore collection system like in RA1?
A: I donno. Look up.

Q: Will the tediously slow shells which can be dodged by light tanks be in?
A: Perhaps.

Q: What in the original RA is not possible or reasonably possible on the RA3 engine?
A: Tech levels, the old Engineering system, the original Spy mechanics/rewards, the original Gap Generator mechanics, AI, and probably others I'm forgetting, but these come up most.

OMG! Screens! The only thing about the news worth reading: 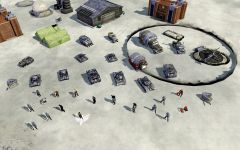 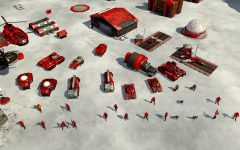 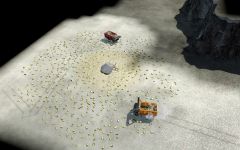 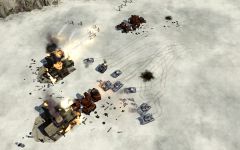 Over already? Afraid so. 'Til next time. And no, I'm not going to make any promises about when "next time" will be. One final note, if you have any more questions that haven't already been addressed here or else where, feel free to ask in the comments section of this news post and it may be answered directly or in a future news posting.

We "your mod's trackers" look for a possible video ;)

yesh a small vid would be nice :)

would be awesome you mean zeke :P

More than that! Btw: I dont understand why there are no plans in releasing a skirmish only BETA. The Team will need a lot time to develope and create all Missions and Maps. While they're working on them ,the community could Beta-test the mainpart and the balancing. :3

Its a good mod ;D though how would the enemy view a gap generator covered area?

I gues the enemy will only see the gap effect (like the RA3 mirrage secondary) because it's the most similar way to RA1, when you only saw fog but (with some minor inteligence requirements) knew there was a gap projector in there.

They'll just be invisible. There is no way to generate shroud in RA3 like you could in past RA games, so the gap generators will act like stealth generators.

The idea is practically the same, but the visual effect is different.
But I think stelth will be great.

but the enemy will still see the "gap effect" right?

Will Mobile Gap Generators be stealthed?

great mod, very stoked on playing, to bad i have to wait until RA3 itself becomes abandonware

You'll be in retirement by then. None of the CNC games are abandonware either, this is EA we're talking about.

And plus, if you don't buy it you don't get to play it online which is one of the driving reasons behind this mod

So no Tech Levels?

Your telling me no WW1 re-enactments, making the Sigfried Line with Pillboxes, charging 200-ish infantry into an enemy base and only walking out with 65 due to flame turrets, or race to kill the ore truck???

wha is tech levels? i never quite got it.

A yearly update would fit you well.