Dear warlords and warladies, rejoice! 'Tis the time to celebrate the release of the newest version of The Protectors. After almost one year of development, enjoy the over one thousand changes we brought to your favorite game! Here are the highlights:

Fresh install! Uninstall all older versions and delete The Protectors folder in My Documents

Other issues on modern setups: read this how-to

Our top priority is to bring more people to the game, and what better way to do that than improve its functioning on modern systems? With support for custom resolutions, players can now enjoy The Protectors on their HD widescreens! Windowed mode is also supported, especially helping let’s-players record the game while monitoring other activities on the same screen.

Such a feature forced us to look at the general design of the Graphical User Interface (GUI) and, as a result, we’ve updated it not only to accommodate this new feature, but also to ease its overall usability. Therefore, all information is now gathered in two parts of the screen: the control panel on the bottom and the resource information and objectives on the top-right corner. This is so that you do not waste time looking all over the screen to find the information you are searching for. Furthermore, we have added two new button sets, one for group special abilities – which allows casting different spells or use different abilities of a particular unit while a group of different units is selected – and one for hotkeyed spells – which allows viewing and casting your hero’s spells without having to open the spellbook. 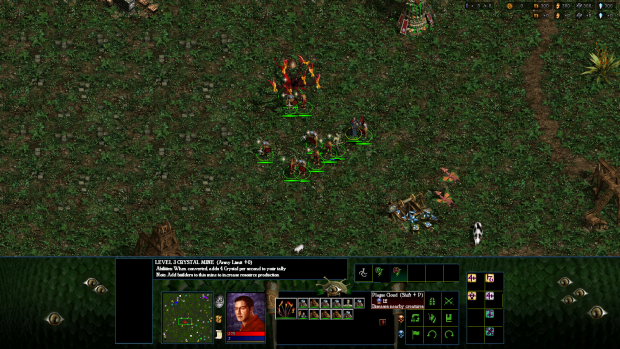 Another way to attract more gamers and have fun is to improve the multiplayer experience. In this regard, we have made several minor improvements. For once, we fixed the annoying crash at the end of battle – a nasty bug that has plagued older versions. Secondly, we reduced lag and loading times by intelligently caching and compressing only the resources used by the game in the upcoming match. We have also added a new hero type we call Multiman, which restricts the hero to play only multiplayer games but he/she instead receives quadruple experience compared to normal heroes. This is for players who rarely play together but still want to evolve their hero only in multiplayer tournaments, at a faster rate. For allied play, there now is an option to secretly chat only with your team members, without letting the enemy know of your plans. The hide command has been tweaked to hide not only race choice, but hero stats as well. Lastly, we have added a spectate option which can be activated after defeat, so you can observe how the battle continues without you.

Back to GUI, you probably noticed that a new resource display was added. This represents the crowns that are in your treasury. Previously, this resource was only usable in campaign mode, but now it has several different uses during battle as well. Other than scripted events, quests and shops may now change this value, but more on that later. Dialog choices can now be selected via mouse click both in game and on the world map. Several fail-safe questions were also added to help the user avoid errors in selecting starting armies, quitting the game to main menu or leveling up. When loosing or winning, players will now be faced with racial popups, rather than the generic barbarian. Audio build-ups complement this feature, so that you can hear Indian yelling when you win as a primitive race, or monstrous noises when you lose as daemons, etc. 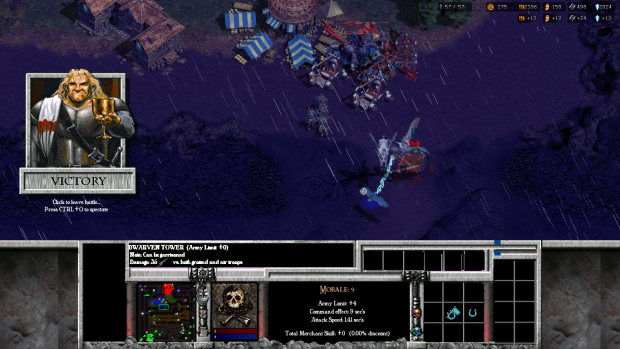 We’ve talked about crowns. A major use for them in battle is to buy weapons from shops. Just like on the world map, items can now be bought with crowns from shops on the battlefield. Furthermore, shops now have shopkeepers with their own personality. Some of them might like you and give you a discount, others might hate you for your race, perks, alignments or recent deeds. Having high charisma will of course come in handy.

Another use for crowns is in the new quest system. We’ve described in more detail about this huge improvement here, but suffice to say you can win or lose crowns as a reward or request or you can even use them for bribing. 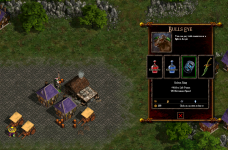 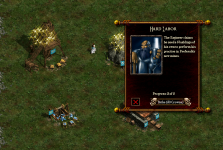 Alright, let us now present you the piece of resistance of this game. Heroes.

Firstly, we’ve added more avatars, portraits and voices to help with customizing your hero to your liking. Additionally, we’ve added new classes with assorting skills, namely the Venomancer, the Blighlord, the Rogue and the Chronomancer. Older classes were also reworked and some renamed to avoid confusion and to fit the lore better.

Secondly, we’ve added new perks to promote ranged attacks. Spellcasters will now cast fireballs as their normal attack, rangers will shoot arrows, and chieftains will throw rocks. Of course, fitting ranged weapons were also added to complement these perks. You might now stumble upon a magical staff or a bow with poisonous arrows, or a bag of javelins which can hit multiple units etc. In total, we’ve added 46 ranged items. The item stash was also increased as a result. 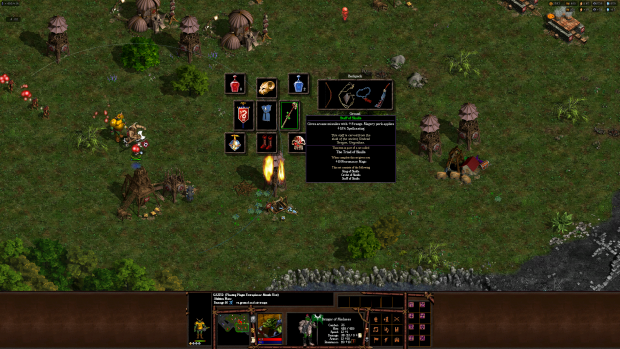 Thirdly, we’ve dedicated a big portion of our time to redefine the spell spheres. Many spell effects were changed and some completely new spells were added, such as Doppleganger and Fool’s Gold for the Illusion sphere, Whispers of Madness, Arcana Curse and Shamanic Call for the Chaos sphere, Frostblade and Glaciate for the Ice Magic sphere (now renamed to Cryomancy), Scry and Divine Peace for the Divination sphere, Shatter and Earthquake for the Rune Magic sphere (renamed to Geomancy), to name but a few. We’ve also added a totally new sphere called Contagion Magic, assorted with new spells that help spread disease across the land. 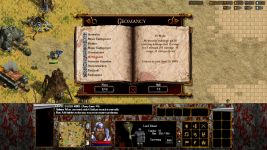 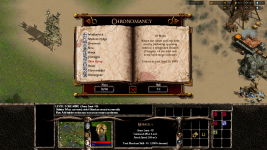 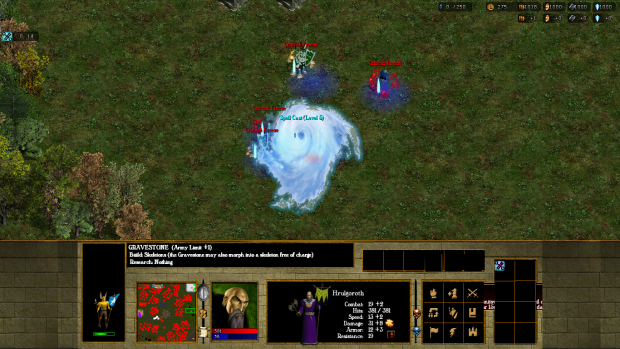 For fans who like playing with high level heroes we implemented something we call Platinum Mode. This Mode triggers when heroes are over level 50 and essentially helps balance units with heroes so that armies do not become under-powered when facing such uber-heroes.

Heroes may now also be affected by psych effects. Weak heroes might now fear Giants or fall in Awe when sighting a Dryad just like any other unit. We’ve also implemented a new poison type which reduces the hit points of the afflicted until death. This lethal poison can be inflicted via spells or units and can have fatal consequences, including for your hero, so you’d better stock up on healing potions. Furthermore, units can now be afflicted with multiple effects. An unfortunate swordsman may now be under awe, terrorized and diseased at the same time.

As for gameplay, we hope to achieve a better balance between the races, while also making them more unique in style. Several new researches were added, along with lairs and utilities which alter game mechanics. The Dark Elves in particular were modified so that they create tortured souls out of each creature they kill, exploiting their suffering to gain resources. Another game changing tweak was done with the XP gaining method, which is now proportionate to the enemy’s strength. Several scenario options were also added, namely No Items Exchange – which blocks heroes from equipping items mid-battle, Old Army Limit – which uses the vanilla army limit system instead of the food based one, and Permanent Retinue – which keeps your retinue alive for future battles even if they died in the previous one. 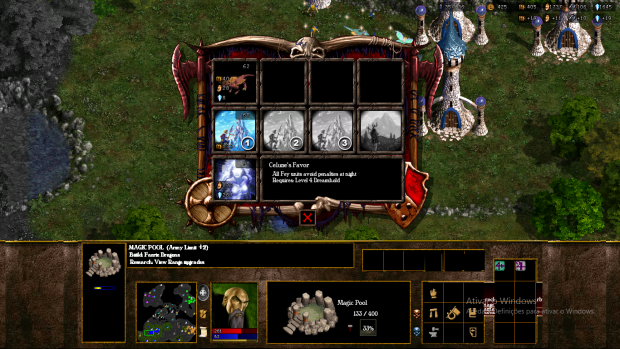 For the story lovers out there, we have released the next chapter in The Protectors, featuring Ice Mage Anagain and the High Elves. We’ve also added another custom campaign, the old (and now adapted) C.W. Magee’s Conquest Campaign. The previous WBC3 Campaign will be available for download as a separate DLC pack, fully supported for this and future versions to come. Furthermore, overall campaign difficulties are now more flexible, meaning the scenarios will be ever more different (and choices will have more weight). New scenarios and missions were also added for skirmishes and multiplayer matches. 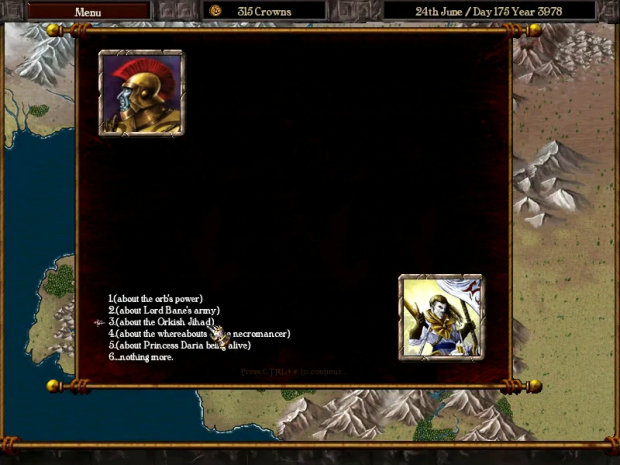 The AI has also been greatly improved, now building all types of buildings and producing all types of units. It will now build walls to defend itself, raze shrines and shops if its hero is dead, carefully select mercenaries before battle, cast more spells like Change Weather or Black Portal etc. Unit AI was also improved: vampiric units will chase critters when they need healing and Queen Spiders will try to lay eggs on animal corpses. Ordering an attack on a unit with a group of units selected will now cause all units to charge at their maximum speed rather than going with the slowest unit in the group. Siege weapons will prefer to attack buildings rather than units (particularly the Battering Ram). 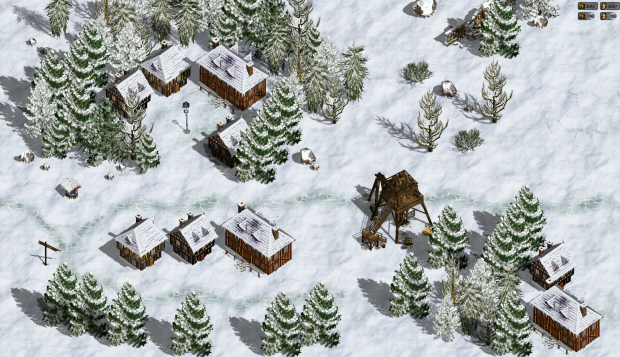 Lastly, we’ve taken a good look on what the atmosphere of the game is and how we can improve it. Many new beautifully orchestrated songs were added, each matching a theme of the game. We’ve also recorded a new system voice to announce the player of what’s happening (credits to Sara Mears). Several new sound effects were also added to better reflect the materials suggested by the visuals.

Well, these are but a few of the changes we’ve done since last year. It is impossible to cover them all in one article and we are sure we missed a lot, but you can read them one by one in this general changelog and this quest changelog.

Thank you all for the participation. We can only hope to bring you joy with this release and wish you happy holidays,

EDIT: If you are feeling generous, you can “buy us a Christmas present” via paypal donations here.

EDIT2: We've setup a discord channel where we can meet, chat and play online. Invitation: Discord.gg

I think another highlight is the complete change in the health/mana regeneration system. Units regenerate mana slower (20s instead of 10 at lvl1). Summon Mana only affects heroes now and has become weaker in effect. The regen skills no longer act as a catalyst when combined with their respective stat, they all up the same respective value. In previous versions of WBC, regen skills and their respective stats decreased time to regenerate individually (which created a serious balancing issue). Now all of this has been both fixed and rebalanced!

One question : what should I do when my heroes are not saved (meaning, that after I win one skirmish, collect items... when I start new skirmish, the game offers only "Create new hero" option)

I set the Protectors.Exe to "run as asmin" and to XP SP2 compatibility mode - no avail.

Just in case anyone cares: I resolved "not saved heroes" by removing/deleting the previous hero data file from Documents\The Protectors

That I am not happy about losing my previous hero data, is yet another story.