"Seven stars and seven stones and one white tree." The biggest irony about the Palantiri is that, at the time that Tolkien wrote the scene at Isengard in "The Two Towers" that featured a black object being hurled down towards Gandalf, the idea of using this as a plot device had not yet come to fruition. As described on pages 64-65 of "The History of Middle-Earth: Vol. VIII: The War of the Ring", the glass ball was originally supposed to shatter on the stairs leading up to Orthanc. But Tolkien t 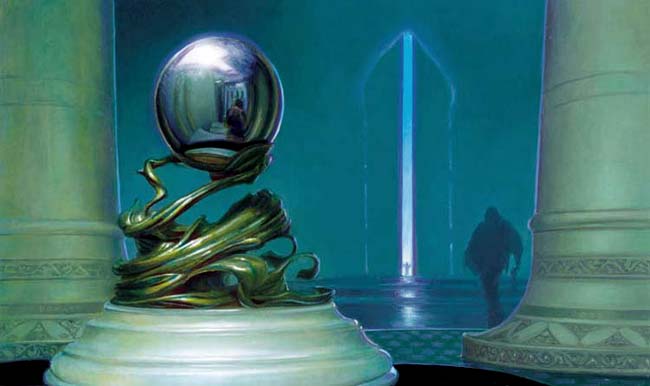 As he rode Shadowfax towards Minas Tirith, Gandalf gave some brief history of the stones to Pippin but most of the lore of the Palantiri came later when it was written for inclusion into the Second Edition. Most of that information, however, never made it into the final revised text. And Christopher Tolkien assembled the writings on this topic in the form of this essay featured in "Unfinished Tales".

Far from being breakable, these stones were in fact impervious to any damage that could be inflicted by men. There were seven stones in the possession of the Numenoreans (an eighth remained in Valinor) with two being considerably larger than the rest. These two "master" stones were too large and heavy to be lifted by only one man. The remaining five were about a foot in diameter. All were perfectly smooth spheres and appeared to be made of some sort of black crystal. Though they had no external markings, there was a specific orientation required to see images properly. They had poles and in order for them to be placed upright, "the permanent nether pole must then be at the bottom". And to see in a certain direction, the user had to be standing opposite that direction while looking into it. For example, to see eastward one had to be on the westward side of the stone and facing east, as if looking through a telescope. Tolkien notes that it was pure chance that Pippin was able to orient it correctly to see Sauron when he looked into it at Dol Baran.

Though a Palantir was not able to transmit sound, Christopher Tolkien explains in end note 5 that:

"Thought could be 'transferred' (received as 'speech'), and visions of the things in the mind of the surveyor of one Stone could be seen by the other surveyor."

The stones could see through solid things such as mountains but could only see an image if it was illuminated somehow. And the user could focus on something specific using great concentration, which over time could cause fatigue and exhaustion.

The Palantiri, according to "The Tolkien Companion", were made by Feanor during the Elder Days and seven of them were given to the Men of Numenor in the Second Age. Prior to Numenor's destruction, the Palantiri were taken by Elendil and his people on the ships bound for Middle-Earth and upon their arrival were distributed throughout Arnor and Gondor. In these days, their use held no danger as they were all in the hands of the Numenorean exiles and served as a means of communication between their locations.

In the North, one larger Stone was placed at the watchtower of Amon Sul (Weathertop), another was located at Arnor's capital city of Annuminas, and a third was kept in the tallest tower of the Emyn Beraid (the Tower Hills), near the Grey Havens. The Palantiri of Amon Sul was the primary stone of the North. The Kingdom of Arnor split three ways over a succession dispute between the sons of Earendur, the tenth King, in 861 of the Third Age. Amon Sul stood at the confluence of the borders of the surviving realms - Arthedain, Cardolan and Rhudaur - all three of which tried to claim it as theirs. By the year 1974, however, the Witch-King of Angmar had so overrun the northern lands that Arvedui, the last King of Arthedain (the longest surviving successor state of Arnor), was forced to flee and took the stones of Amon Sul and Annuminas with him, lest they fall into the hands of the Witch-King. Both Arvedui and the two Palantiri were lost at sea in 1975 during a mission to seek aid from men who dwelt along the Ice Bay of Forocel. Thus the line of Kings in the North was broken.

The third stone located in the Tower Hills was of little use to Men as it only looked westwards towards the Undying Lands and could not communicate with the other stones. After the fall of Arnor, it was entrusted to the care of Cirdan and the Elves of the Ered Lindon for safekeeping.

The other four Palantiri were kept in Isengard, Minas Anor, Minas Ithil and Osgiliath. The stone of Osgiliath was the chief Palantir of all the other stones and the primary one in the South. In 1437 of the Third Age, during what was known as the kin-strife, that stone was lost presumably in the River Anduin when the Dome of Stars, where it was kept, was destroyed. This conflict was a kind of "civil war" between the Numenoreans in Gondor proper and those of the coastal fiefdoms such as Umbar and Pelargir.

By the time the Witch-King returned to Mordor and made open war on Gondor, the remaining Palantiri had been neglected. When Minas Ithil was captured in 2002 and turned into Minas Morgul, the Ithil stone disappeared and Gondor did not know of its fate but suspected that it had fallen into the possession of Sauron. And for the next thousand years, the remaining stones at Isengard and Minas Anor (now Minas Tirith) were locked away and mostly forgotten about. In 2050, the last in the line of the Kings of Gondor, Earnur, disappeared in a confrontation with the Witch-King. And, with Earnur having no children, the Stewards would rule in the King's place until a rightful heir presented himself. Though the Stewards had the right to use the stones, it was felt to be pointless since so many of the others were lost.

The concern of the rising Dark Shadow in Mordor consumed all of Gondor's attention. In 2463, the White Council was formed to keep watch on what they feared was Sauron's waxing power in Middle-Earth. In 2759, Saruman requested of the Steward of Gondor that he be allowed to occupy the abandoned tower of Orthanc, as its custodian and on Gondor's behalf. This request was granted to the White Wizard who spent many years studying the lore of Gondor, the One Ring and, of course, the Palantiri. At some point, he discovered the stone of Orthanc. Though it is not clear when he first used it, by 2953 Saruman ceased to cooperate with the White Council altogether and formally claimed Isengard for himself. Only two years earlier, in 2951, Sauron openly made his presence in Mordor known.

The other members of the White Council - Gandalf, Elrond and Galadriel - were aware of the existence of the stones but they were each more focused on finding the One Ring. That Sauron would use the Ithil stone to ensnare Saruman and manipulate Denethor was something they hadn't considered since they did not know what had become of the Orthanc stone and the Anor stone. It wasn't until July 3018 that Gandalf learned of Saruman's betrayal and he reported this later that year at the Council of Elrond. But, again, the use of the Palantir as a means of communication with Sauron was not yet known (or suspected).

When Pippin looked into the stone at the end of "The Two Towers", Gandalf realized its significance and the role it had played in the War of the Ring. Immediately, he thought of the Anor stone in Minas Tirith and feared that Denethor had found it. One of the wizard's goals in making haste to the capital of Gondor was to determine if this was the case and to judge its effect on Denethor if it was. This is the frame of mind he was in during his conversations with the Steward.

There were no records of the Anor stone's fate after the disappearance of Earnur and it was assumed that it had been long hidden away in some secret place for hundreds of years. But this was not the case. Tolkien notes that Denethor seemed to have been aware of the Palantir even during the reign of his father, Ecthelion II. And though he must have greatly desired to use it, he dared not until he himself assumed the Stewardship. The author explains:

"At least one of [Denethor's] motives must have been jealousy of Thorongil, and hostility to Gandalf, to whom, during the ascendancy of Thorongil, his father paid much attention; Denethor desired to surpass these 'usurpers' in knowledge and information, and also if possible to keep an eye on them when they were elsewhere."

Thorongil was actually Aragorn using this other name during the period when he came to the aid of Ecthelion II and Gondor as a captain of war. It may have been at this time that Denethor began to suspect Thorongil's true identity.

Denethor undoubtedly began using the Palantir as soon as he became Steward. There were lots of opportunities to use the stone when Sauron was not using the Ithil stone. Sauron was occupied with preparations for war and he never let subordinates use it. At some point, however, Sauron and Denethor came into contact with each other. Denethor was strong-willed and was able to maintain control of the Anor stone. But Sauron used his Palantir to show him images of his growing might and drove the Steward to despair by making him believe that Mordor's victory was inevitable.

Though Denethor had the right to use the Palantir, he was not as pure in Numenorean blood as Aragorn, who possessed the strength to turn the tables on Sauron by causing the Dark Lord to vacillate in fear and doubt. In the end, Aragorn was able to force Sauron's hand and this gave an advantage to the Armies of the West. While the stones became a tool for perpetrating war on the peoples of Middle-Earth, they ultimately played a major part in the final defeat of Sauron.