Five mods with Operation in their name, good variety, should be an enjoyable release for everyone. Try them!

Another day, another theme! This time, the word of the day is "operation". As most of you reading this already know, Operation: Something-or-another is a common name for Wolfenstein 3D mods, all because of Episode 2, Operation: Eisenfaust, a very memorable piece of gameplay and home to the most divisive enemy in the game. The other pervasive naming scheme for PC mods is Project: Whatever, spurred into life by the fame of a seminal mod Project: Totengraeber by B.J. Rowan. But there was no Totengraeber for Mac, so while various Operations are numerous in the Mac modding scene, there are barely any Projects at all, from what I've seen.

Enough trivia though. We bring you five mods this time, although a more precise description would be four mapsets and a PC port. And of course that's far from all Operations ever released. You've already experienced a few (Annihilation, Kennel Mission, Oswiecim) and there's still a few more waiting to be ported, including a major mod known as Operation Ravage. But let's go with what we have on hand, shall we?

Operation Emerald Light is a Japanese First Encounter mapset by Yoshimichi Endoh, 10 maps all in all. I don't know much about it, the original readme is in Japanese and all garbled, and if it has a storyline (it should, given the interesting name...), Clubey (who rescued the scenario out of the depths of Japanese modding scene, as usual) says nothing on the topic. The maps themselves are of rather varied quality and complexity, low on decoration and high on guard congestion (especially later on), predictably climaxing in a battle with Hans (or two, or three)... Give it a go.

Edit: Zombie says the storyline is a direct sequel to the First Encounter, whatever that may entail... Its main purpose is to discourage you from playing Wolfenstein and try Doom, so go do that now. 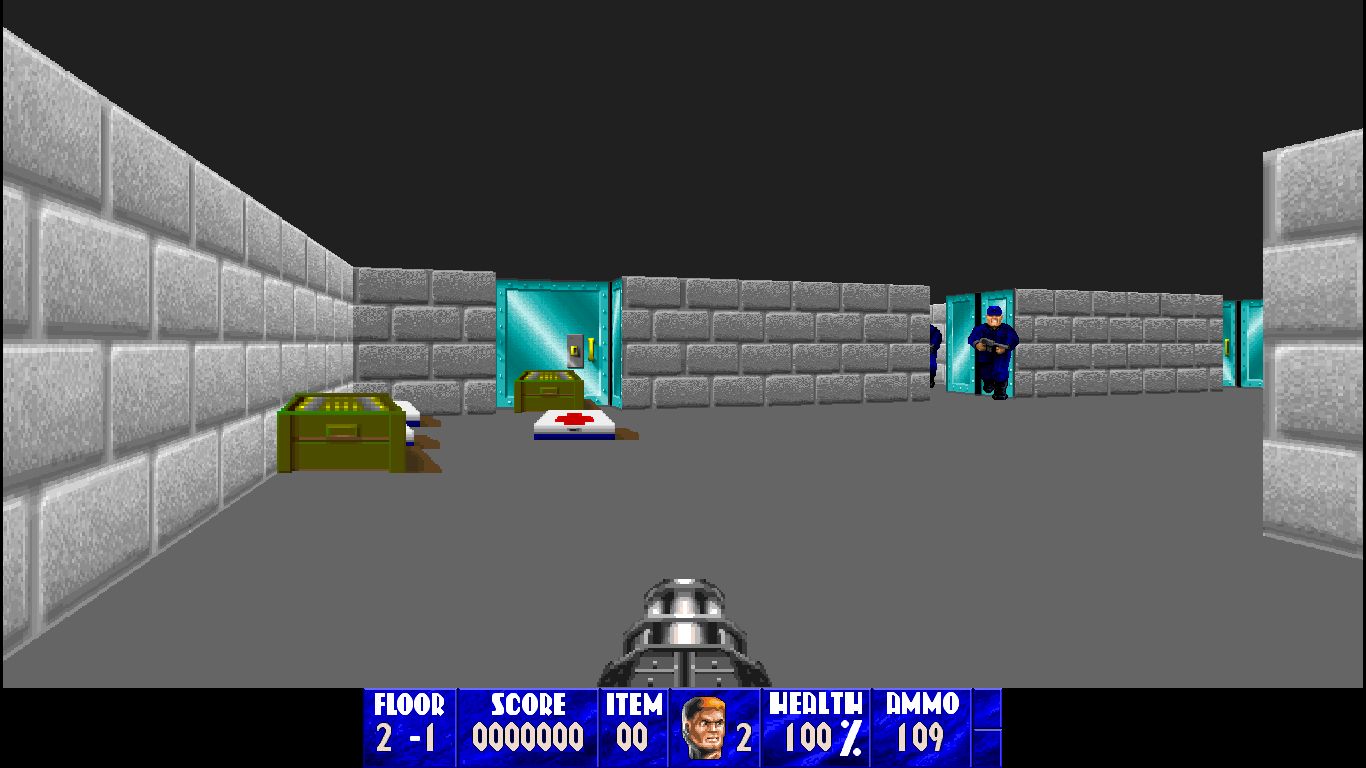 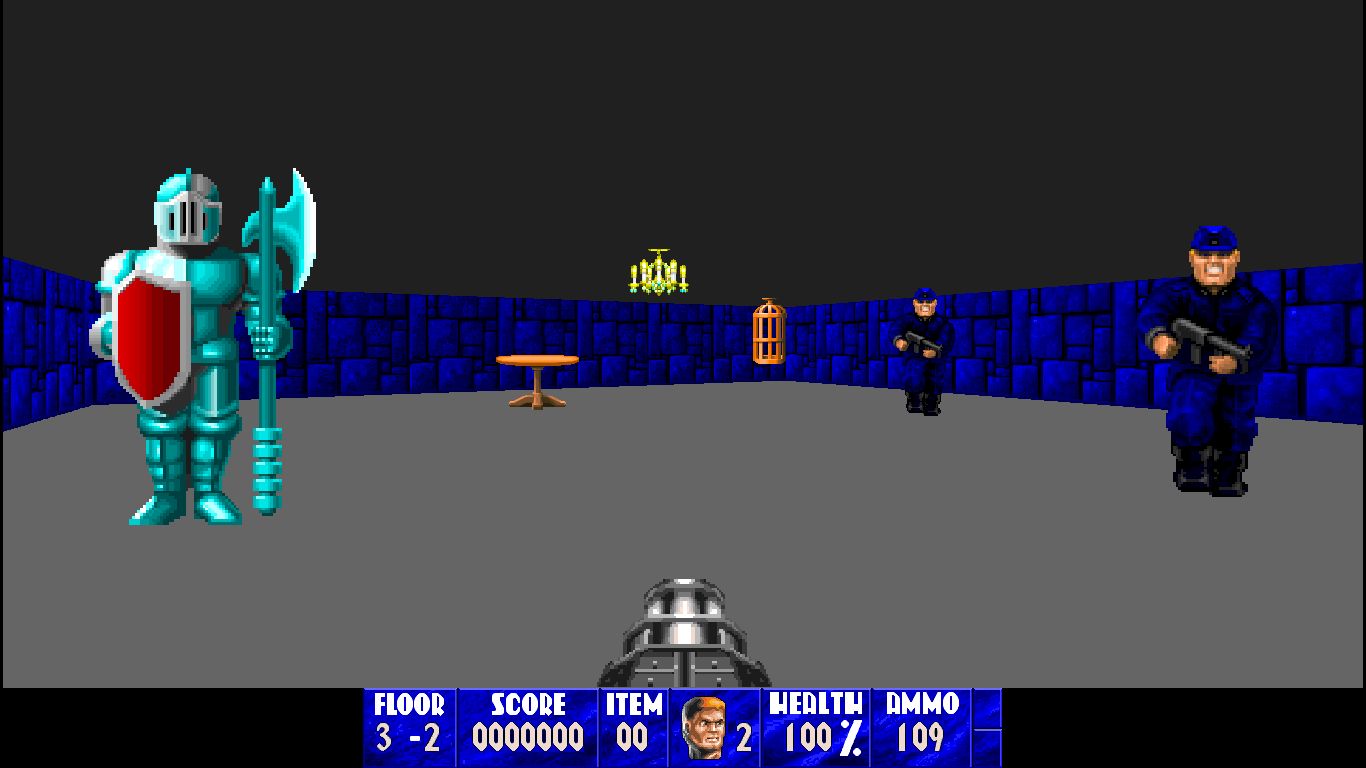 Operation Indy is only one map for the First Encounter, but don't let appearances fool you, it's an interesting beast. Made by skavin (who has a PowerMac 61000 w/ 7.15 sys software), it puts you in the shoes of Indiana Jones, seeking to retrieve treasures stolen by the Nazis in Algiers, North Africa. Despite this introduction, the mod doesn't actually do much to reflect the theme in terms of visuals (in fact it's all vanilla), but the map itself is rather suitably Indy-like, with tons of secrets, tight passages, fake-outs, tricky areas, heavy opposition... Your main goal is a single piece of treasure - a cross - and if you activate the elevator switch before collecting it, your mission is considered to be a failure.

There were supposed to be four more levels for this mod, each focusing on the other four Wolfenstein treasures, but the author was only willing to give them away in a tradeware manner: you send him a piece of software or another Wolf scenario, he gives you the full set in return, the exchange being conducted via e-mail. However, I don't know if the full thing is available anywhere. Perhaps it's lost forever just like two entries of Cliff Drumeller's Run & Gun series, or maybe they never existed in the first place. Hey, skavin, if you're reading this - hand 'em over! 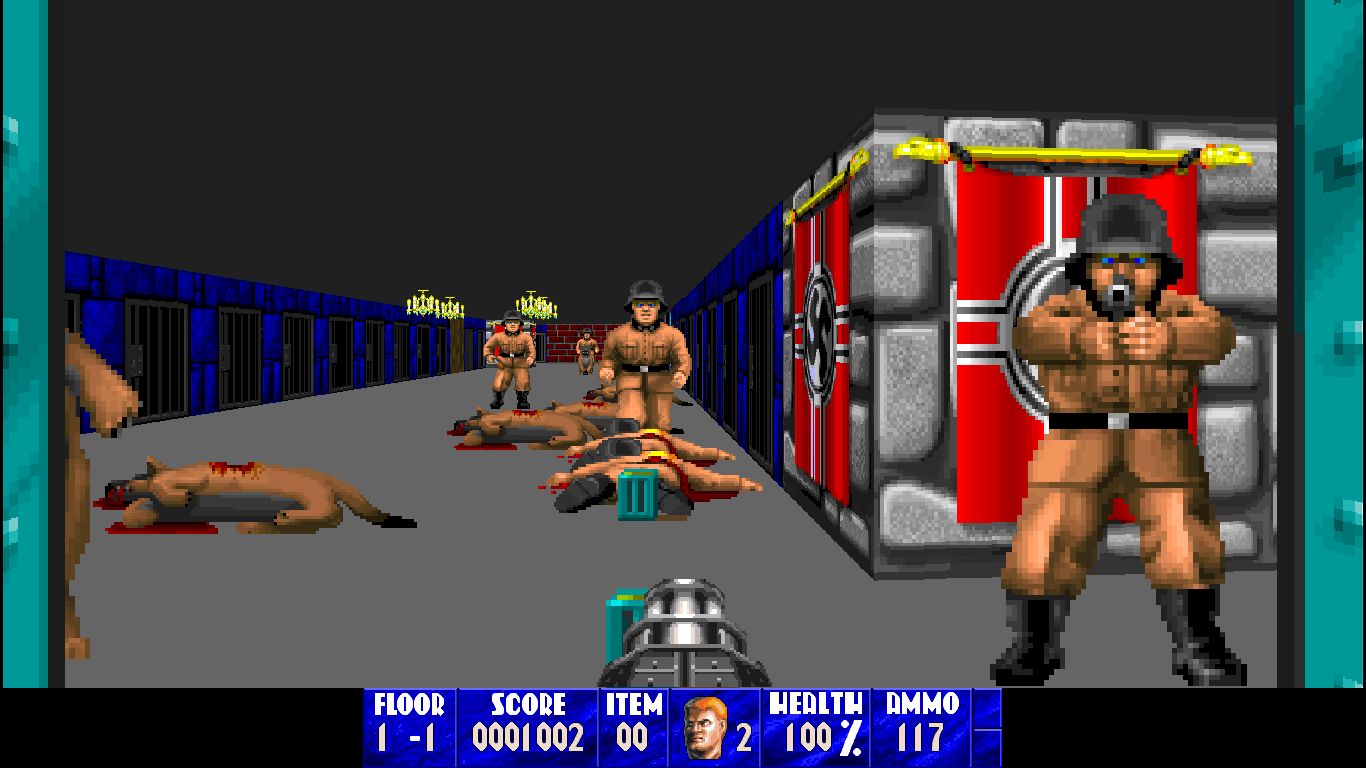 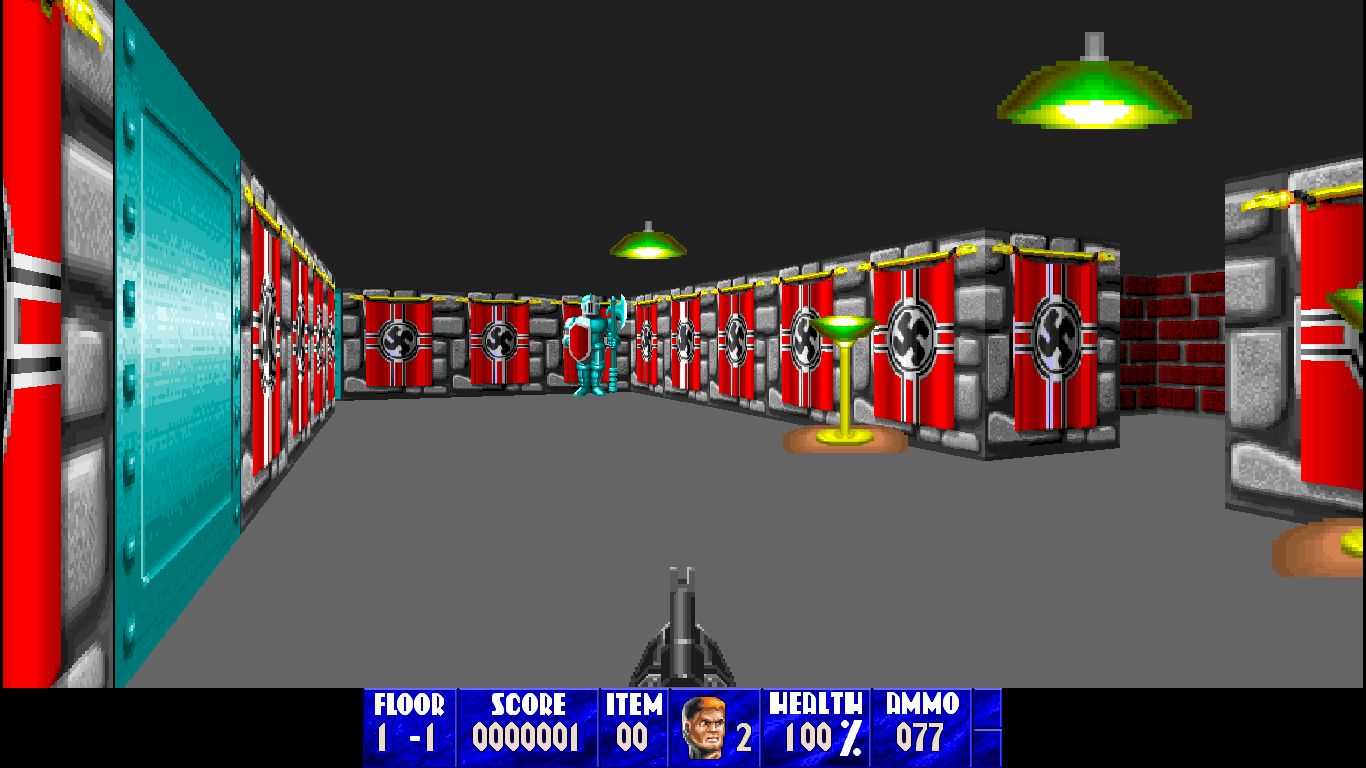 On to Operation Overkill. So this one is actually a port (by Laz Rojas) of a PC mapset of the same name, released by Randall Penn in mid-1994. Yeah, I'm porting a port. That's because 1) I want to be thorough and 2) it's still a bit of a different experience on Mac. Speaking of, let's briefly discuss Laz' porting conduct based on this example. First of all, there's a few new walls added to better represent the original output, as well as Gretel Grosse (sadly not upscaled to Mac native sprite resolution). The maps themselves are meticulous re-creations of the originals, and while some concessions have to be made to fit the thing within Mac limitations (some guards were removed because of the 127 max limit, some objects replaced because they have no direct counterpart on Mac), in general this is a port of commendable accuracy...

That's what I thought, until I realized that the secret map is inaccessible! I donnow, perhaps I'm doing something wrong, or I have an old version of the set (but it was downloaded directly from Laz' website...), but fact is, the alternate exit is set up properly, but the alternate elevator object itself is not where it should be (or anywhere else). Faced with a bug this critical, I have decided to do what I do extremely rarely and intervene, fixing the issue. The secret exit is thus somewhere in floor 1 and you'd do good to seek it, as well as play all the other floors, because it's not a symptom of PC master race arrogance when I say this mod features some of the best mapping you can find on the Mac scene. 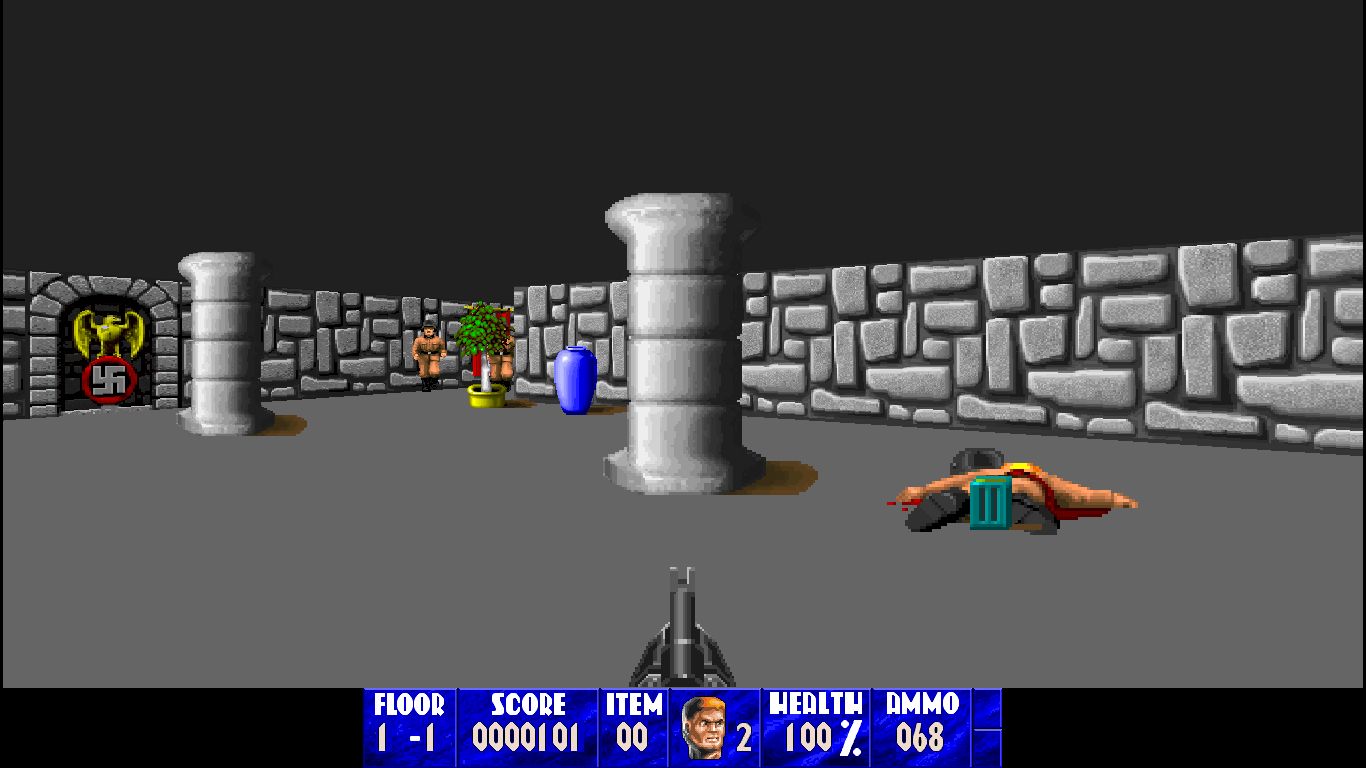 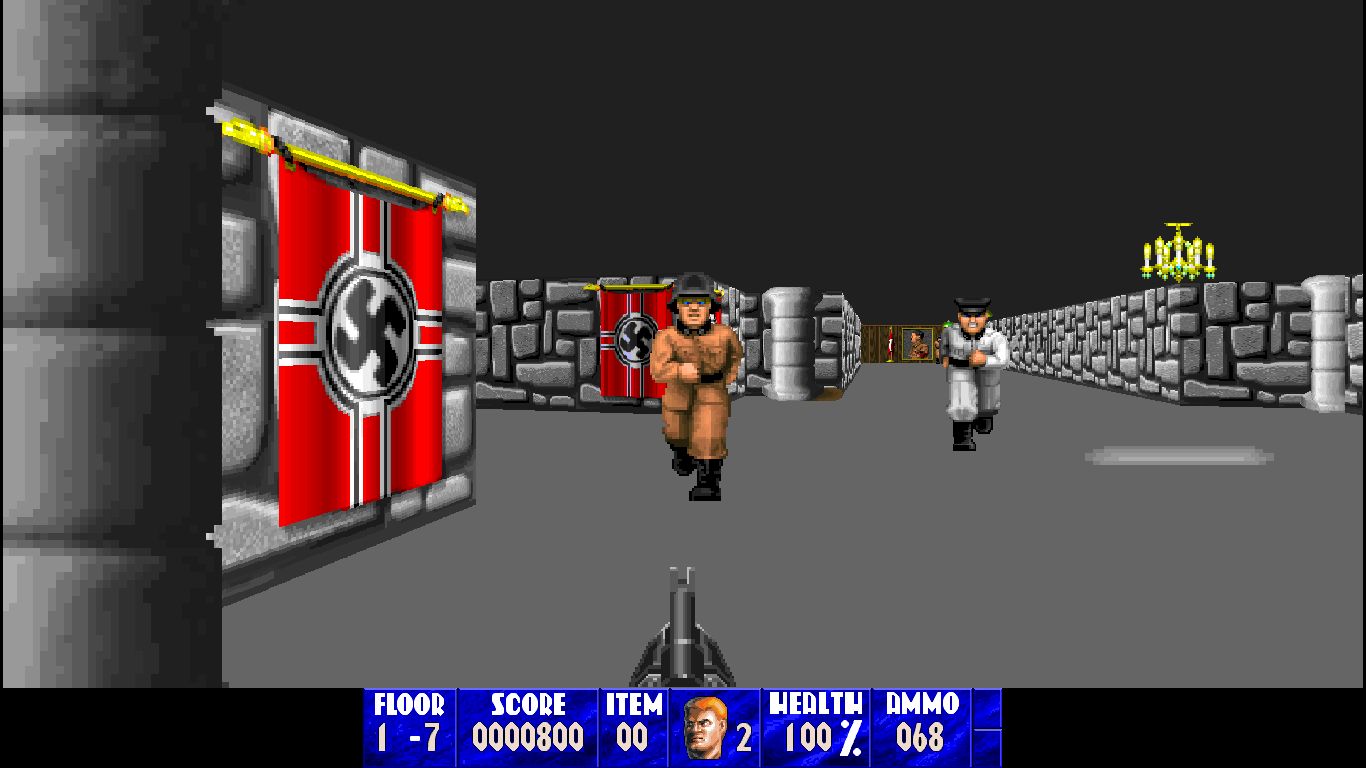 The pleasantly named Operation Suicide is three vanilla maps for the First Encounter, featuring some fairly interesting mapping though I believe slightly mired by the usual overwhelming Mac enemy crowds. Steal a fortress, kill some treasure, infiltrate guards... Doesn't sound like a big deal, right? But then you reach floor 3 and are faced with a large array of doors, and you realize it's a puzzle that requires real life knowledge to solve. Examine the readme, it tells you all you need to know. Get it right and achieve glory, get it wrong and have some death in the face. Sort of neat. 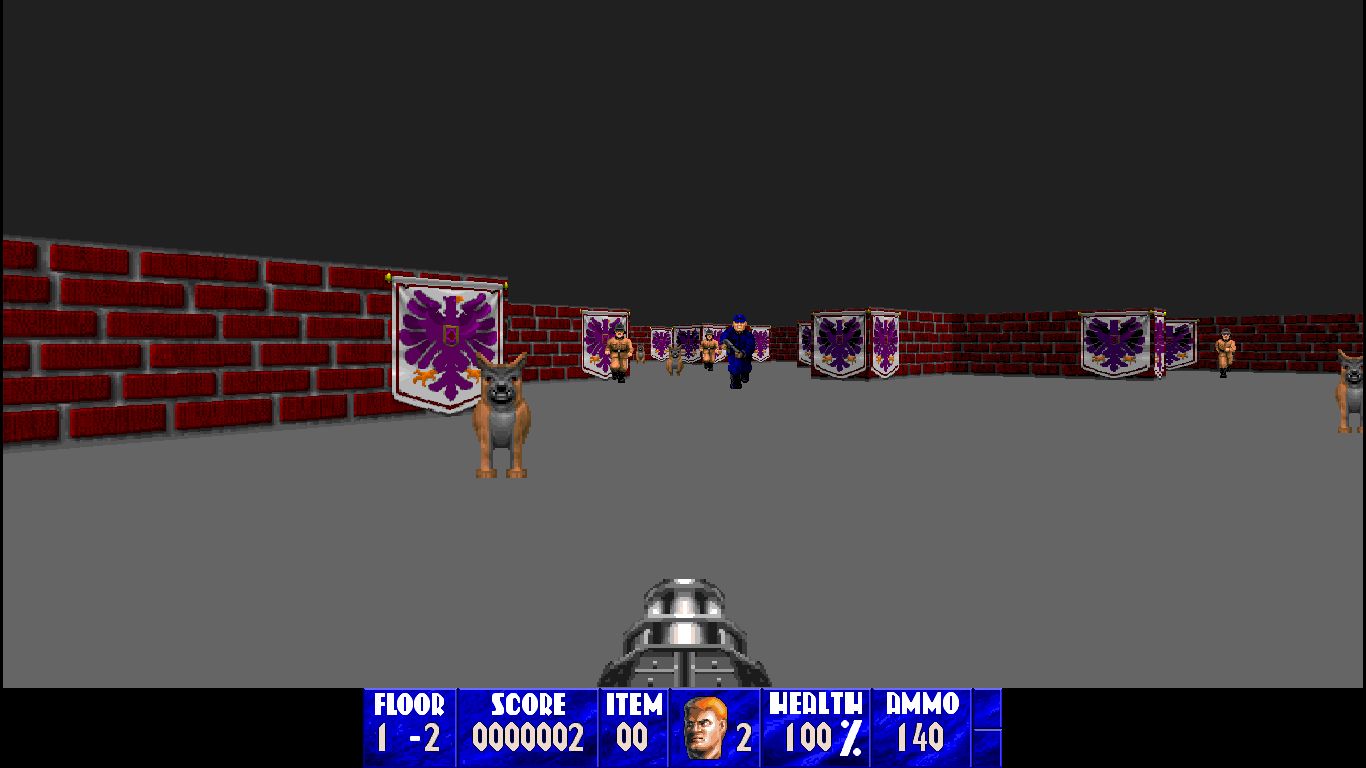 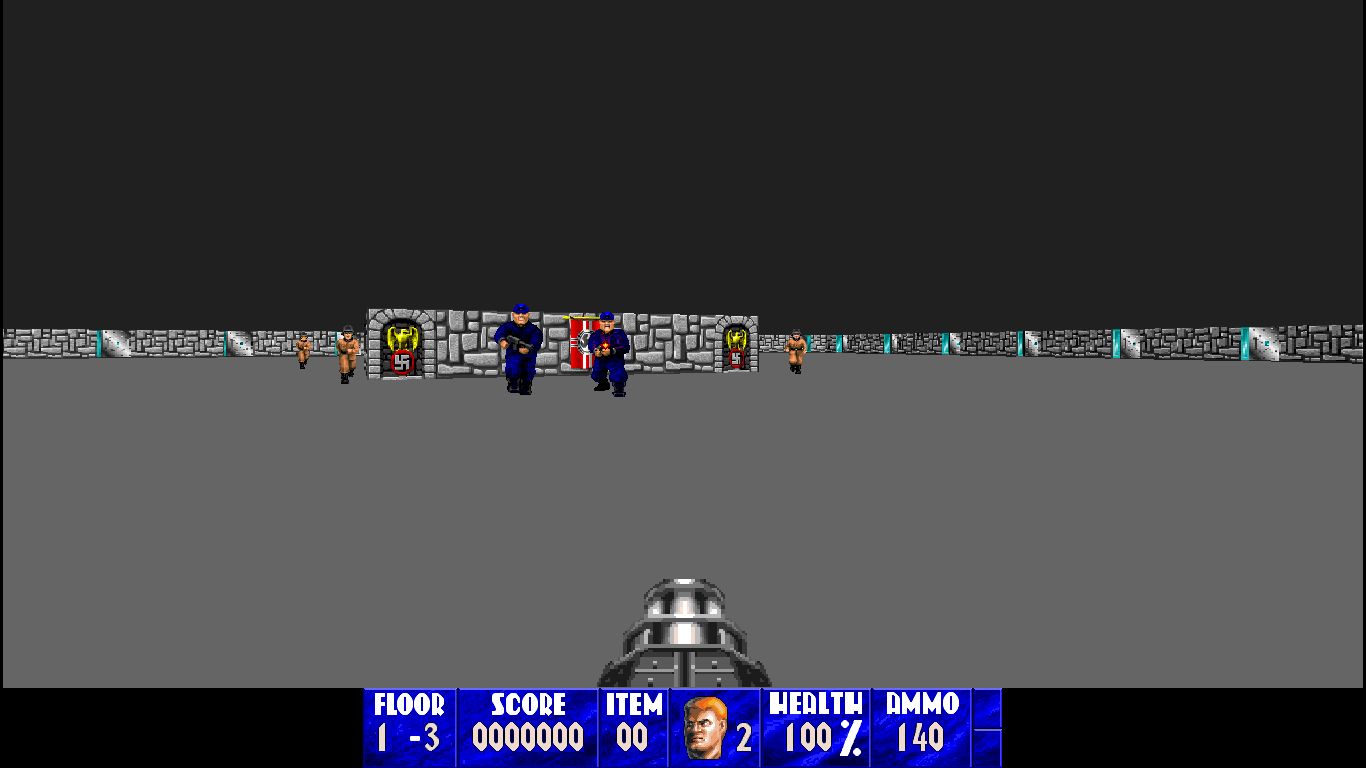 Number five (is alive)! Operation Uberfaust, ten Third Encounter maps by God knows who (once again there's a readme but the author never bothers telling us his name). We are given a pretty elaborate storyline. Remember back when you killed doctor "Shaabs" and his army of mutants back in Episode 2? Well, the Mexican secret forces (?) have got news for you: the doc was just a clone and his mutants - shitty duplicates. In short, you got bamboozled. The real Schabbs is back at Hollehammer, this time surrounded by the real deal - Ubermutants, mighty, armed to the teeth, infused with Trans Grosse's DNA. No worries though, a Mexican (?) B-24 Liberator bomber is going to take you to the place and drop you so you can actually do your damn job.

If this sounds exciting, prepare to be let down, as there are no new graphics or sounds and the maps are actually vanilla Episode 2 maps with some Ubermutants thrown in here and there. But hey, at least the storyline is funney. 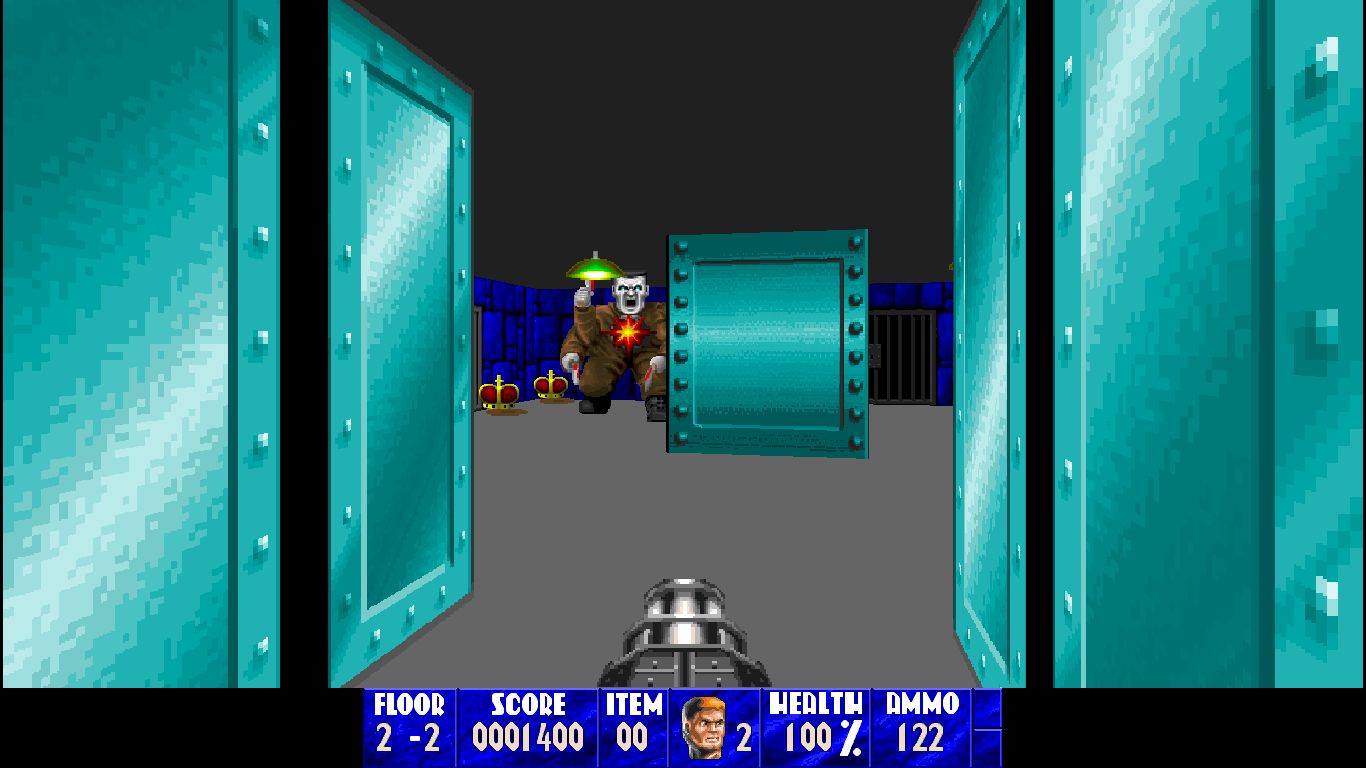