A quick look at the major factions of The Nam: Vietnam Combat Operations, a real time strategy game released in 2020 by Pinoy developer Tiger Yan.

The Nam: Vietnam Combat Operations is a fanmade, nonprofit real time strategy game created by Tiger Yan in 2020 to recreate company-sized combat operations set during the American phase of the Vietnam War (1965 – 1973), termed by Vietnamese as the American or Second Indochina War.

Players can choose to play as the US Marine Corps or the Vietcong (VC) and People's Army of Vietnam (PAVN).
The US Marines can draw support from additional service branches like the Army for Special Forces (SF) troops, the Air Force and Navy for land and carrier-based air support, plus South Vietnam's Army of the Republic of Vietnam (ARVN).

Tonight, we'll look at the major factions of the game. 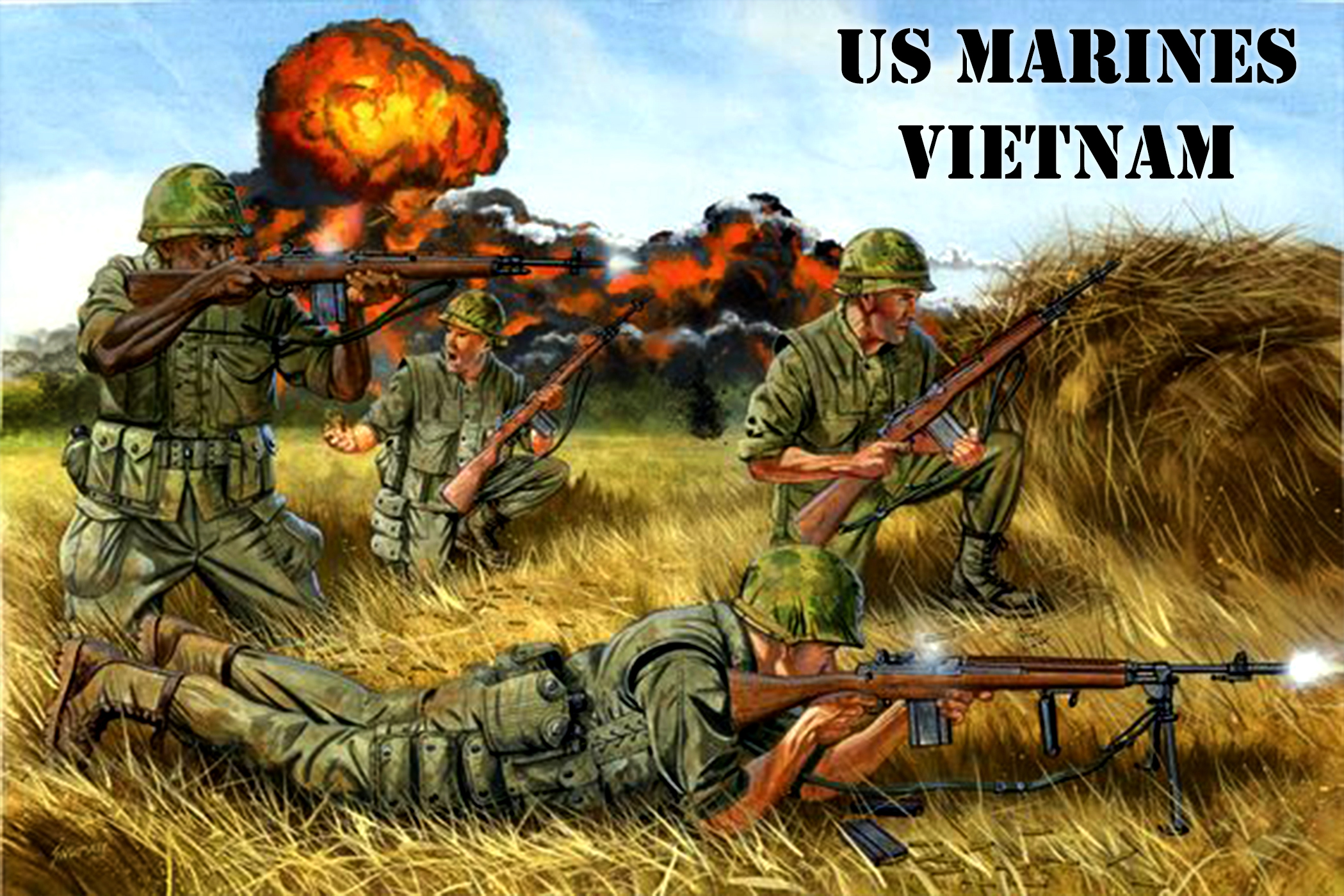 The muscle of any US Marine push are the grunts, moving slowly but surely in multiple platoons of about 30 men consisting of Marine Riflemen, Machinegunners, Platoon Leaders and Marine Corpsmen, supported by 60mm Mortars for indirect fire support. Fast-moving Guard Dogs can be added to search for and strike fear into VC and PAVN troops, while Combat Engineers can capture and repair buildings.

Company Commanders provide useful artillery fire support from behind the lead squads. At the start of each game, you can randomly be provided with M79-armed Grenadiers, M14-armed Squad Leaders or even a powerful Battalion Commander who calls down heavy artillery from nearby unseen firebases. Every few operations, a pesky War Reporter or useful South Vietnamese LLDB Scout might also join.

Once they make contact with the enemy, grunts typically pull back and call in Air Support or Armour, before charging and finishing off the enemy with rifles, machineguns and grenades. Troops are trained at the Barracks.

The US Marines also used a wide array of armour during the Vietnam War, ranging from fast-moving gun jeeps to long-range self-propelled artillery guns based at well-defended firebases. Tough and able to absorb incredible amounts of damage, armour assets are used to support infantry attacks, in combination with air power. Armour assets are requisitioned from the Motorpool.

US commanders can unleash a veritable aerial armada, ranging from useful UH1B Hueys, nimble A4 Skyhawks, durable A1 Skyraiders, all the way to giant B52 bombers. Aircraft are requisitioned from Aircraft Revetments and the Air Control Center. 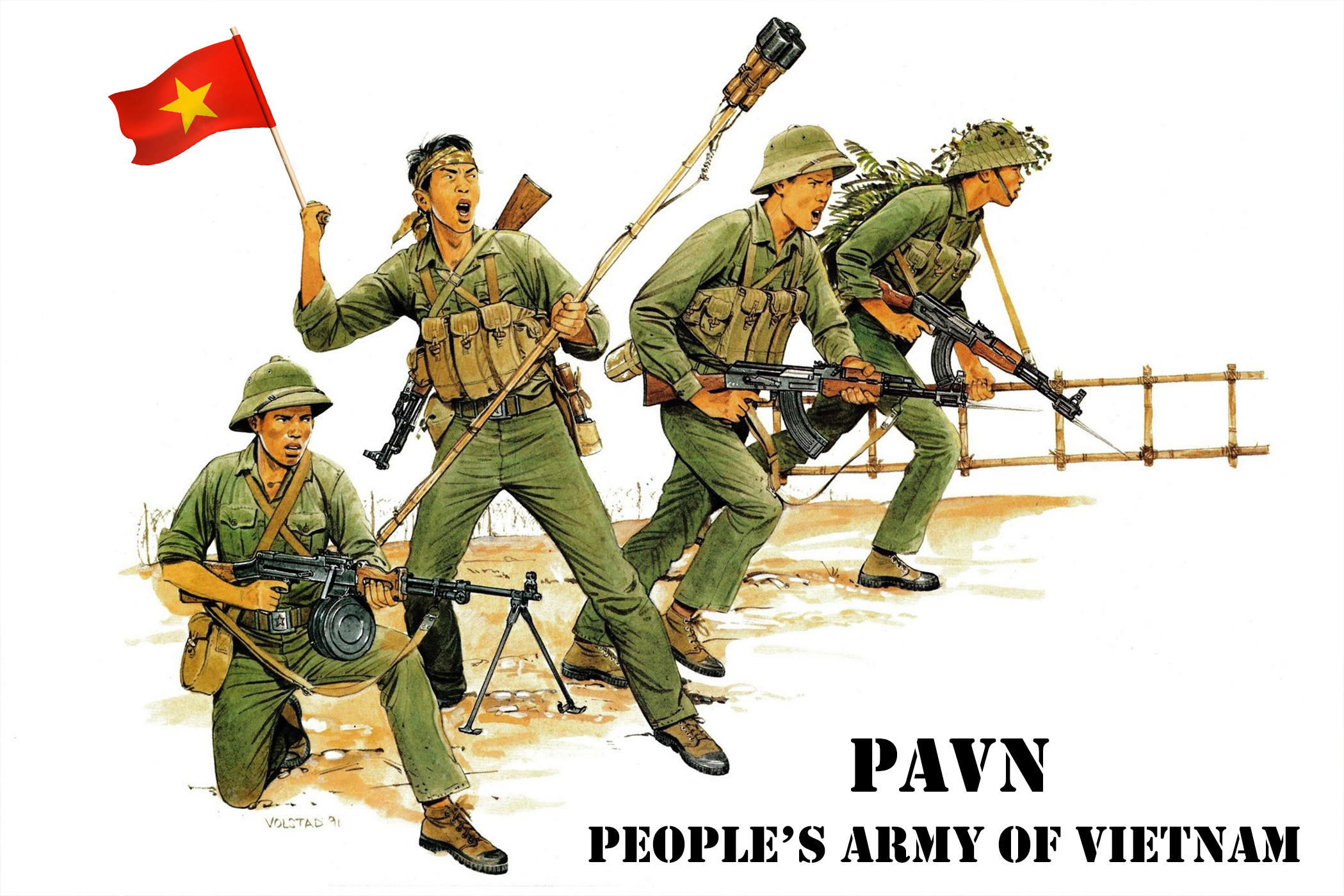 Vietnamese Bo-Doi or infantry are fast-moving, lightly armed and nearly always concealed until they attack. Best fielded in multiple platoons of 50 composed of Vietcong Guerrillas, NVA Regulars, elite Dac-Cong Troopers, Vietcong Snipers and Vietcong Medics, augmented by anti-tank troops such as RPG Troopers and NVA Sappers to deal with Armour or Supply Convoys. As the VC and PAVN are primarily an infantry force, they have ample infantry support in the form of 82mm Mortars, 57mm Recoilless Rifles and versatile anti-infantry and anti-air DSHK 12.7mm Heavy Machineguns.

Specialist troops include Engineers to capture or quickly repair damaged structures, Suicide Sappers to blow-up vital installations, vehicles, aircraft or tightly-packed groups of infantry, plus 122mm and 140mm Rockets which are used to destroy American buildings at extremely long ranges.

VC and PAVN infantry platoons sneak as close as possible to their targets to ambush them (press G to commence your ambush), inflicting as much damage as possible before fading back to safe-zones, out of reach of American Artillery or Air Support. They then heal wounded comrades and rebuild their units to full-strength with quickly-trained and inexpensive recruits to begin a new wave of attacks. Initially built from a hut with a Connection to the Ho Chi Minh Trail, they can later be built from Hidden Tunnel Complexes built much closer to their targets, or in remote areas of the map. Troops from other nationalities such as the Khmer Rouge and Pathet Lao can be recruited only by Vietnamese players in certain maps.

PAVN armour assets were rarely used before 1972 but appeared decisively several times to strike terror into the hearts of grunts. The VC and PAVN are primarily an infantry force and adding tanks will reveal their positions. Tanks are thus usually confined to base or supply truck defence, where they can be hidden by cloaker buildings, or used for a final decisive attack against weakened American firebases. AA tanks and limbered AA guns on the other hand, should be strung out along truck supply lines to protect against air attack. Armour assets are requisitioned from Truck Parks.

Historically almost never used as attack craft in South Vietnam, North Vietnamese air assets have been included in a ‘what-if’ scenario. The game engine currently does not allow air-to-air combat, which is what PAVN fighters were known for. Historically, these planes vigorously defended the skies over North Vietnam, accounting for over 80 aerial kills. The PAVN also fielded several heavy-lift helicopters, but only for ferrying supplies in well-defended safe zones. PAVN MIGs are requisitioned from MIG Airfields.

Army of the Republic of Vietnam (ARVN) 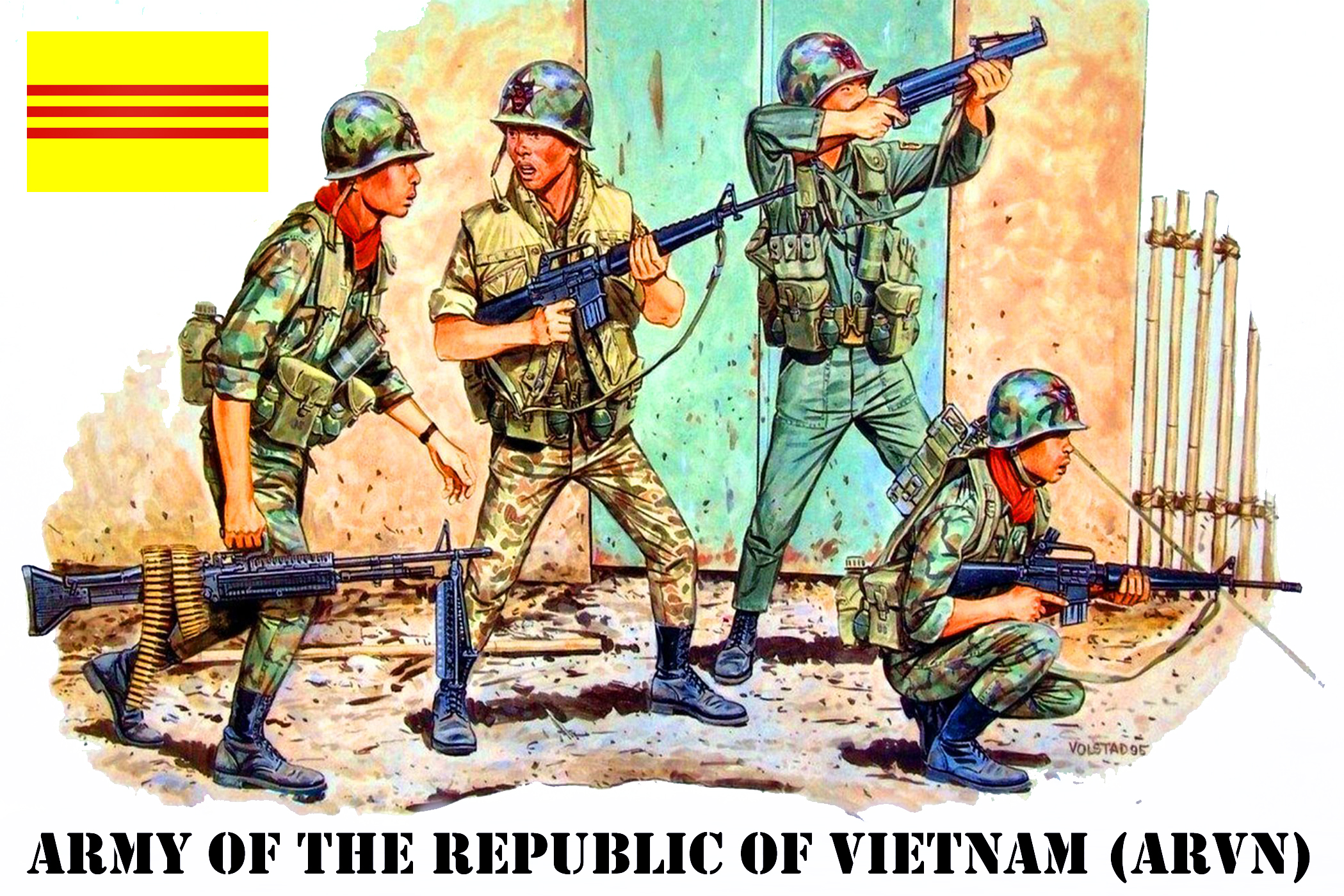 Units from the Army of the Republic of Vietnam or ARVN can occasionally be encountered in various maps. Typically guarding vital roadways, ports and important villages, ARVN troops are largely confined to static defence.

American players can use Combat Engineers to capture ARVN Outposts and ARVN Armored Brigade Detachments to train ARVN Govt. Troopers, elite ARVN Rangers and 'Hac Bao' Medics. Further building a USAF Relay Station allows you to train elite ARVN Paratroopers, while capturing LIMA Radar Sites will give you access to VNMC Marines. Both American and Vietnamese players can produce South Vietnam's premier light tank, the durable M41 Walker Bulldog, upon capturing an ARVN Armored Brigade Detachment. In the Xuan Loc map, a powerful fighting ARVN General can even be requisitioned by capturing the ARVN Command Bunker. Using ARVN troops to defend your supply lines is a cost-effective way of prosecuting a campaign. 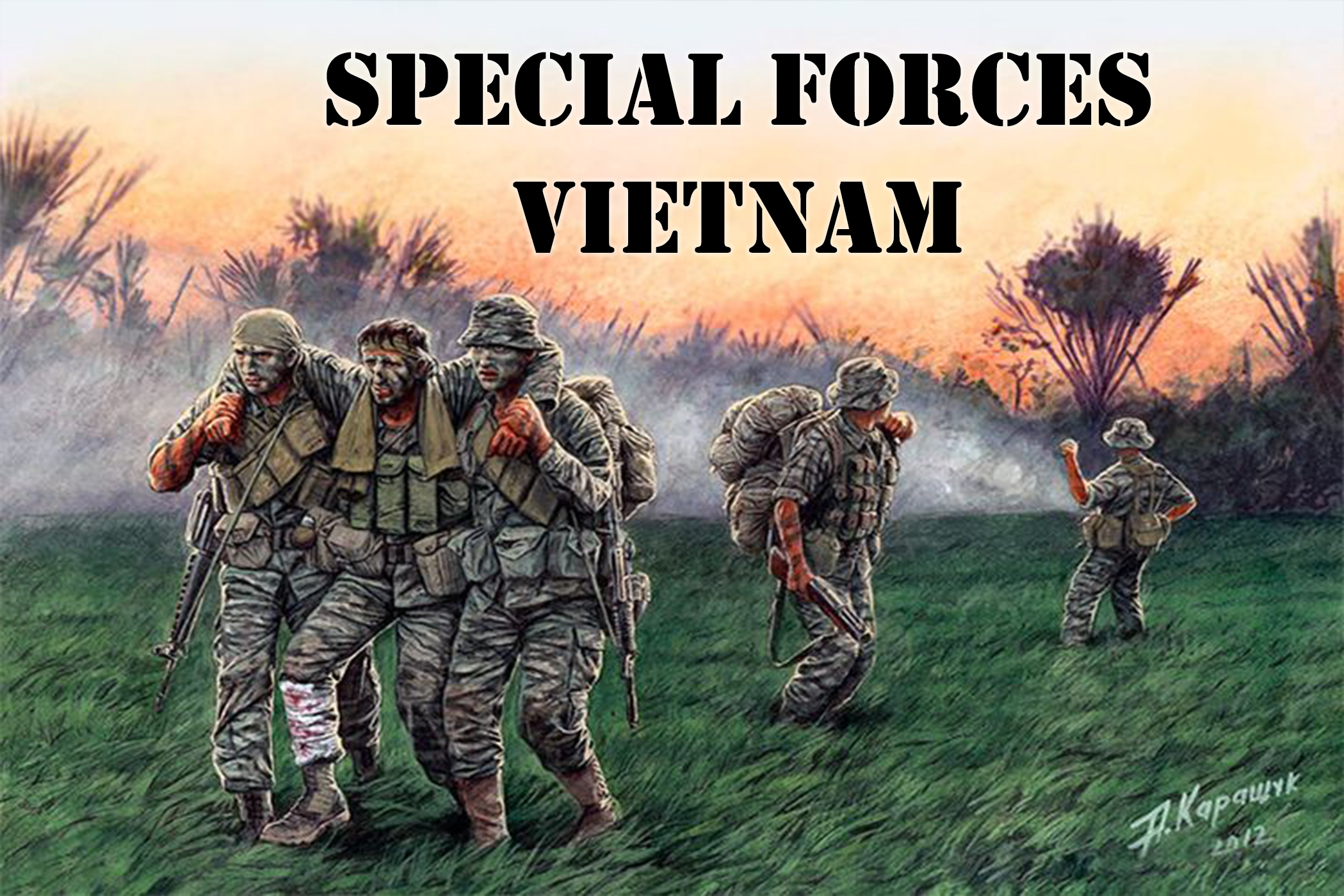 American Special Forces (SF) troops under MACV-SOG are parceled out on a limited basis to US commanders.

With the primary mission of spotting targets, raiding supply convoys and assassinating key enemy personnel, MACV-SOG troops are not optimized for extended engagements, but can more than hold their own long enough to be extracted by friendly helicopters. MACV-SOG troops are trained at the SF Recondo Training School, which also upgrades regular grunts into Squad Leaders.

Watch as well-camouflaged PAVN and VC forces ambush a US Marine company in the Que Son Valley. (VCO)

3) Click on the grey box with three horizontal dots [ . . . ]. 𝗗𝗼𝘄𝗻𝗹𝗼𝗮𝗱 𝘁𝗵𝗲 𝗲𝗻𝘁𝗶𝗿𝗲 𝗳𝗼𝗹𝗱𝗲𝗿 (Vietnam Combat Operations Public Release 2020). The folder with its 98 files can be downloaded with a single click.

4) Once the download finishes, open the folder then find and double-click on 𝗩𝗖𝗢.𝗕𝗔𝗧.

5) Click 𝗗𝗲𝗽𝗹𝗼𝘆 and choose your battle. The official 𝗩𝗖𝗢 𝗥𝗲𝗮𝗱𝗺𝗲 contains everything players need to understand and master the game and its myriad maps and units.

6) Completely voluntary, but we highly appreciate donations to APOPO, a nonprofit organization working to clear deadly landmines in Cambodia, so this game can do some good for the people of Indochina.

Learn more by checking out The 'Nam: Vietnam Combat Operations, only on MOD DB!