Some exciting Synapse beta update musings, as well as the usual invigorating behind-the-scenes insight into the life of an indie game man...

Oh yes, things are going well. Or rather they were, until this update didn't manage to make it onto the ModDB home page. This always makes me very sad and tearful. I have made this video to express my feelings on the subject:


Now, if we are allowed back out of the stinking ghetto of the Archive and back onto the front page, let us first begin with this, the first piece of fan-made Synapse content. It's a tutorial video which two of our beta testers (thanks Sid and Mr. K) made completely spontaneously:

Having someone from your tiny beta group (probably about 15 people at the moment) getting so into the game that they're making tutorials so the other players can get better? Priceless.

As you will have gathered, this indicates that we're in full swing with the first public beta. Things are progressing well and people are playing a lot. We've introduced a ranking system so that people can get the measure of each other: Ian has various blog posts about that over at Visiting the Village.

Secure is proving to be the most popular game mode, with intense bidding wars taking place. Here's another fan video from Sid and Mr K:

On a similar theme (and because I think this post must need more screenshots), I'm going to guide you through a game of Secure I'm having against Pilot to give you more of an idea of how it works. Click on each image to see what's going on... 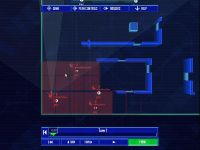 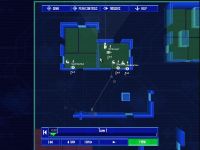 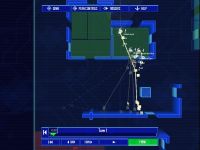 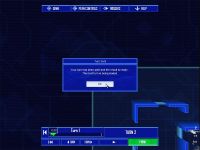 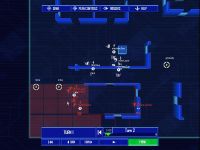 More of this game soon!

We're currently considering our next move, and a lot of it depends on our eventual strategy for the game. It could well be the case that an invite-only beta will start soon, allowing us to let in a load more new players. We still have quite a lot of graphical and polishing work to do before then though. Our technical artist is currently working on some decent effects for bullets and explosions to replace the rubbish ones we have at the moment: that should make a lot of difference.

On another note, I recently wrote an article for Gamasutra on marketing indie games - you can check that out here. This got quite a lot of attention and was recommended by various places, including Game Tycoon, one of my favourite blogs.

Before we descend into the usual stupidity, I should mention that friend-of-Mode 7 Cliffski has his new game out on preorder today and you should all go and check it out: Gratuitous Space Battles

Right, now it's time for another stimulating insight into the indie game "lifestyle". That makes it sound like an "alternative sexuality" - I can assure you that it is not, although it is sometimes an alternative to sexuality. 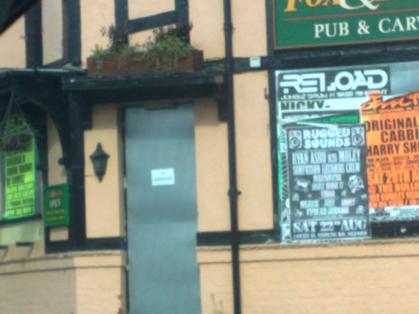 I post this image as a testament to failure. We were stopped at a traffic light when I spotted the utterly inimitable MC name "Harry Shotta" on a poster, but wasn't quite able to snap it in time. Here is my attempt. And here is Harry Shotta "spitting some bars". Um...rollin'. Let's do this fam. For the myspace gang. Wow.

Here is some documentary evidence of my visit to the office this week. 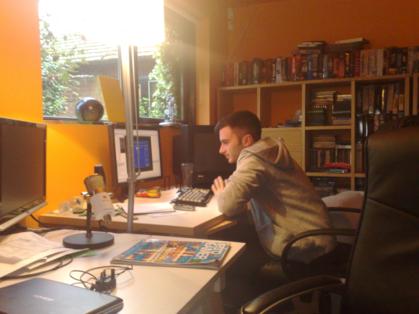 Here is (soon-to-be-officially) freelance programmer Thom Shutt in his natural environment, staring zen-like into a mutex. 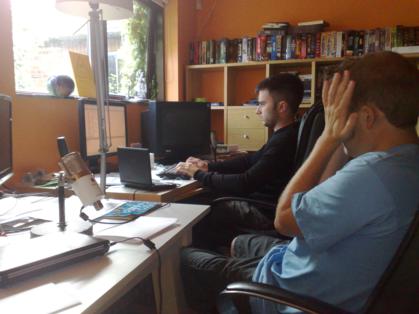 Here is what happens when Ian and Thom "extreme program" - Ian facepalms and Thom tries to ignore him and listens to Spotify in one ear. Thom has been doing sterling work defeating the mutexes on Top Sekrit Projekt: hat-tip. He also showed me this video, which is one of my current favourites:

At the Crazy Bear Farm Shop near the office, they have alpacas that are far away. Here they are: 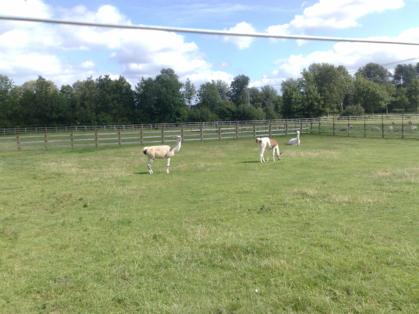 Alpacas are genius. There are also a couple of reindeer there: they were going mental all over the place and I couldn't be bothered to photgraph them. SOON. 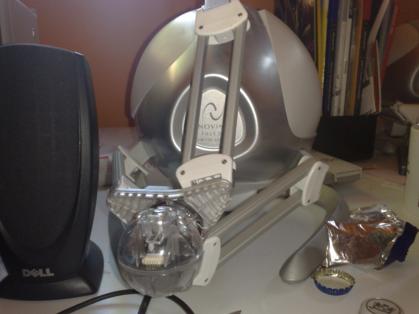 Ah, yes a Novint Falcon. WE LOVE THE NOVINT FALCON and we love Novint. Go and buy one and buy our old game The Feel of Steel to go with it immediately. I'm not kidding. Novint have very kindly agreed to help us out with an awesome promotion we are doing at a games event in the UK coming sooon.... 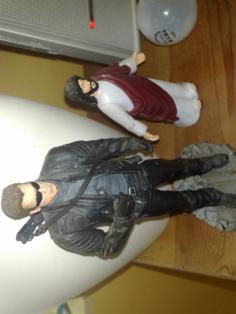 This picture is more amusing at this angle. Theme: they both came back.

After going to the office I had to go to the post office. I shot this from the hip as I didn't want the people in the post office to think I was photographing it in order to prepare A RAID. I hadn't bothered shaving for about a week at this point and looked like a proper miscreant: mm delightful. Anyway, I fucking hate the post office with massive ire. Firstly, it's a place you only go to when you absolutely have to, like the doctor's: there is nothing pleasurable about it. You are herded into the kind of bendy line that normally precedes a roller coaster, except there isn't a fun, exhilarating ride at the end: there is a squat grey booth inhabited by an angry lumpy troll who thinks that everything you believe is wrong and everything you say is stupid.

What's worse is that they play endlessly grating adverts for foreign currency exchange and insurance at you while you are pressed into the human meat-pen. Oh, yes, I will definitely COME BACK TO THIS ANUS OF HELL next time I need a service I can easliy buy elsewhere: thank you for cementing the positive association of being hot, bored and angry to the need for outmoded paper Euros. 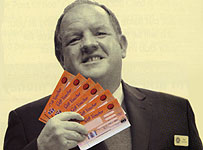 Fuck you, Ken. Fuck you.

While we're on the subject of things I hate, this weekend I went to Wigan and had to come back via Sandbach Service Station. That looks like this: 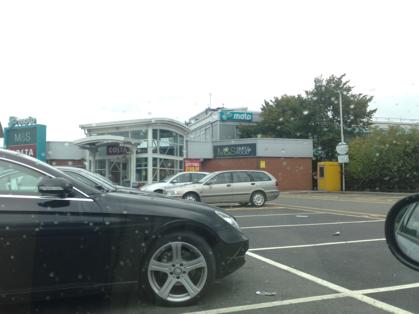 Wow, and I mean wow. I love how they take these places and amplify everything that is appalling in life. There's always some knobend with a massive van who parks it across two bays who you have to avoid, and then you have to go in past the sweaty, flubbering women and snarling feral children to sullenly relieve yourself into a filthy receptacle and then crawl, starving and dehydrated to a miserable grey harshly lit container filled with limp sandwiches and select the least horrifying one to nibble as you try to straighten your back against the unforgiving plastic seat. Actually, I went to Costa and had a panini (or, more correctly, panino) - it was ok. I love the fact that is in the IMDB sub-category "sandwich".

Pfff, what else? Oh yes, I recently re-read Phonogram. It is a pheonomenal piece of work - read it even if you don't like comics (I don't), for it is pure goodness.

Thanks once again for supporting the cause of ludicrous banal updates - your presence is felt.'

If you enjoyed this in any capacity, why not TRACK our updates?

Hahaha oh wow, this made me lol more than once.
The video's are cool, I wish I could try this myself!

I love the Wicker Man! It was such a crazy movie! I was so confused which side anyone was on until I figured out that everyone was against him. It's so sad, though, that the guy who plays Harry in Spider Man was going to be the next one... Back to the point, great update, and the game seems to really be coming together now. By the way, has anyone called that number yet?

Thanks guys. Still mortified this isn't on the front page - I've resubmitted a couple of times but no reply :-(