Post news RSS The latest update is released, and how I'm doing on the trailer

This week, I tell you about the release of version 9.3, and I tell you my discoveries related to producing an up-to-date trailer for the game.

Olvand v9.3
Hey all, finally, the new update is out! I've never published the changelog here before, but I decided it might be a nice way to summarize for you what's new:

Or if you want somebody explaining the changelog while showing some basic gameplay, Afterlategaming's got you covered:

I really liked Afterlategaming's first video I talked about [last week], so I'm really happy he decided to make more; another new video by him explains how to go from nothing to a house, which might by handy for the 100 new players that have been invited today!

My own server is up and running!
Speaking about inviting players, I have done an important discovery: Olvand's server runs great on Amazons EC2's micro instance! Or, if that means nothing to you: I can run an Olvand server myself for very little money! So far, I've been dependent on volunteers like Tomas Olsson and the Gamesketch Network for servers for people to play on, and want to keep using their services (if they are okay with that), but with this new wave of testers I'm also going to experiment with running a server myself completely. Let's see how that works!

Working on the trailer
Like I told you last week, next up is creating a new trailer. The first step of course is doing new screen recordings. I've asked my younger sister to help me here again (you also saw her play in my previous gameplay video a year ago); together we've already recorded some basic stuff like gathering plants, crafting an axe, building houses, etc. This week I've spend most of my time editing the results. All previous videos were done in Windows Movie Maker, which is an easy program, but also terrible to work with as soon you want something more specific or complex, so I've decided to learn myself Premiere Pro. This was confusing and frustrating at first, but I'm starting to get the hang of it now; the more I use it, the more I enjoy working with it - in particular because the things I want to do are actually possible now.

To give you an idea of how the trailer will look, see the preview below. It's not that surprising, I think: 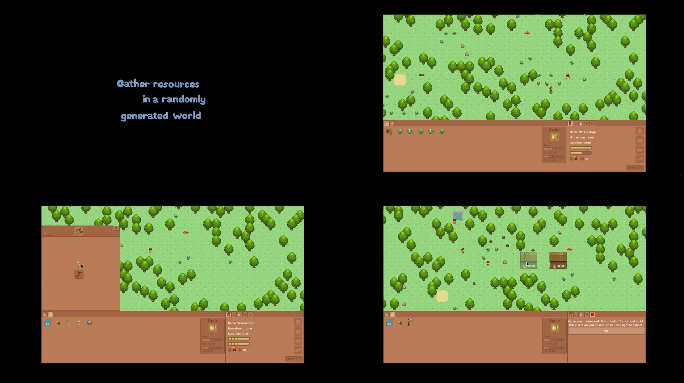 Awesome! Though the art seems sort of empty to me. Not enough shrubbery. Ah, but I'm used to seeing crazy boatloads of stuff like that so don't mind me.

I actually agree. Later, the worlds will be filled with randomly generated plants.